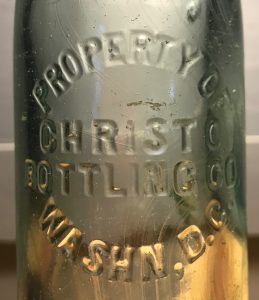 The Christo Bottling Company was in operation from 1917 to 1927. It’s primary founder was Herbert Guggenheim, who, according to 1920 census records, was born in 1886 and a native of Washington D.C.

Beginning in 1907 and up through 1911 he was listed in the Washington D.C. directories as a “wholesale liquor” dealer with an address of 1636 9th Street, nw. The directory listings did not associate him with a specific company but a newspaper advertisement printed in the January 1, 1910 edition of the Washington Times called his business the Phoenix Liquor Company. 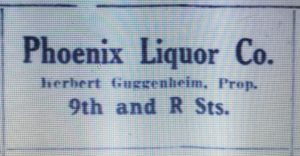 Between 1912 and 1917 Guggenheim was listed as a “salesman” or sometimes “solicitor,” and then, sometime in 1917, he partnered with Sydney E. Gunst and established the Christo Bottling Company. The 1918 and 1919 Washington D.C directories listed their business address as 931 C Street, nw, with both Gunst and Guggenheim named as proprietors. In 1920 Gunst was no longer included in the listing, apparently retired.

Primarily operated during the prohibition years, the business dealt in non-alcoholic beverages. They apparently served as a local agent for the Richmond, Virginia based Christo Manufacturing Company, bottling and distributing Cristo-Cola and Cristo Ginger Ale. In addition, they must have held contracts with other beverage companies as well. This advertisement, printed in the November 20, 1917 edition of the (Washington D.C.) Evening Star, named the Christo Bottling Co. as a distributor for “Moer-Lo,” a beverage manufactured by a company named Moerlein of Cincinnati, Ohio.

An invigorating and non-intoxicating beverage with sparkle, tang and individuality. 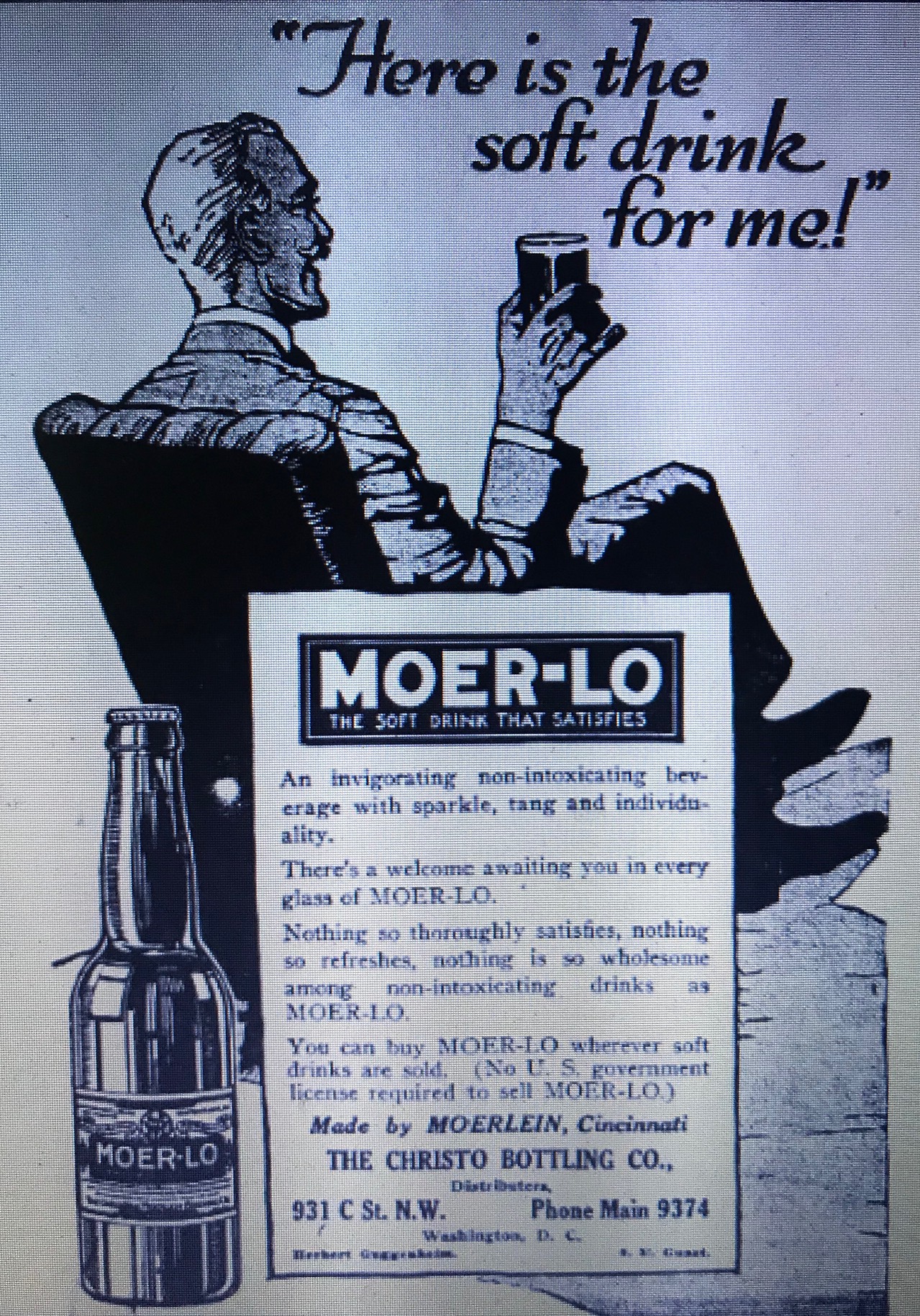 In addition to selling Christo Ginger Ale, by 1918 or 1919 the company was also selling another brand of ginger ale as well called “G & G.” Using the “G & G” trade name got Guggenheim into a legal battle with long time ginger ale manufacturer Cantrell & Cochrane who sold their ginger ale under the brand name “C & C” and claimed copyright infringement. According to the appellate court records: 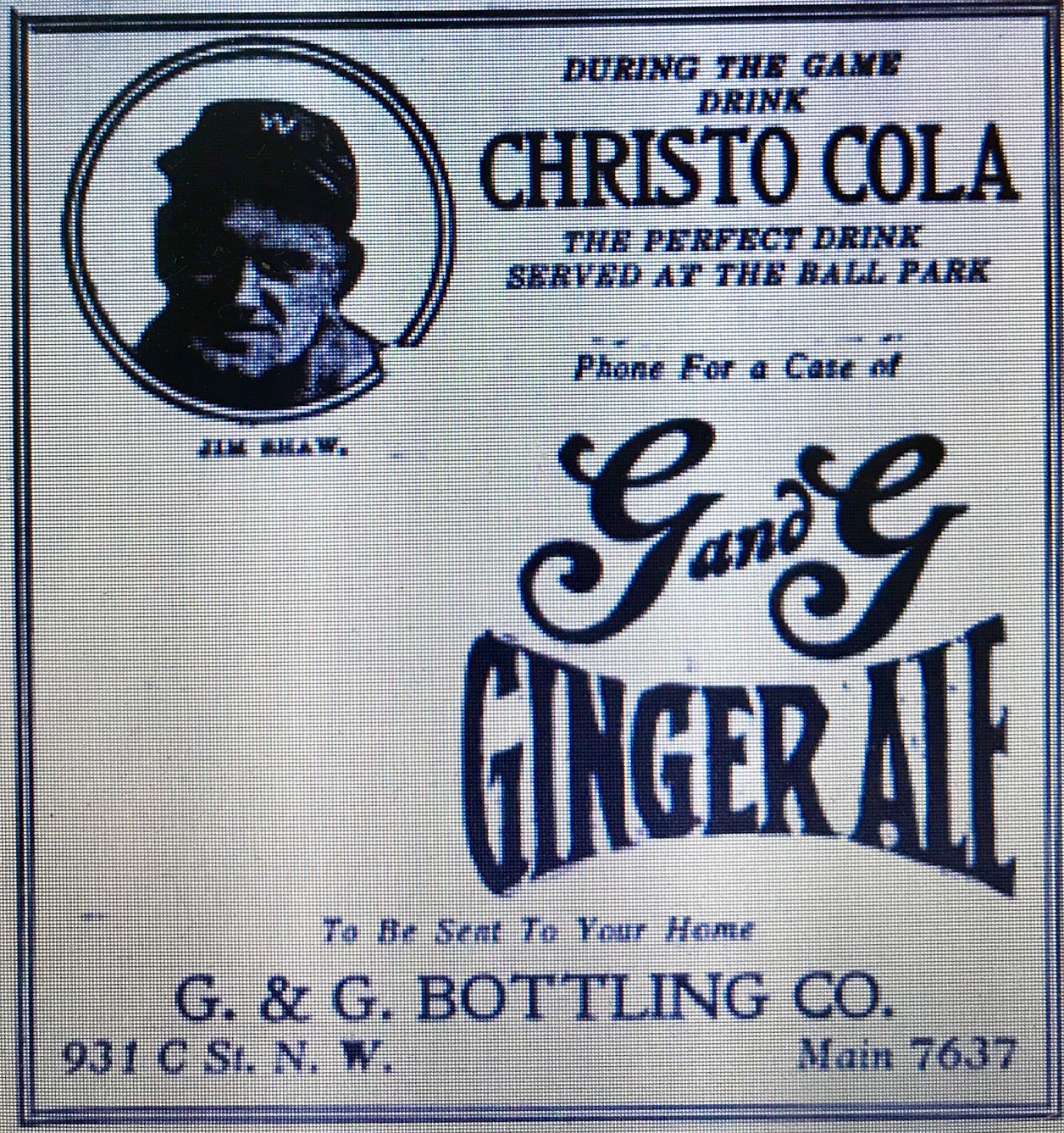 Not surprisingly, in a decision dated January 4, 1926, the Washington D.C. Court of Appeals found in favor of Cantrell & Cochrane.

G & G more nearly approximates C & C both in appearance and sound, than any other two letters, and their continued use inevitably would result in the reaping by the defendant of the benefits incident to the long established and widely advertised business of the plaintiff. The decree is affirmed, with costs.

The Christo Bottling Company was not listed in the 1928 directory but Guggenheim was; as the proprietor of the Guggenheim Company, a bottling business located at 3301 K Street, nw. Whether or not this change in company name was related to the court case is not clear. The Guggenheim Company remained listed through 1934, always at the K Street address.

The bottle I found is a 7 1/2 ounce machine made bottle that dates to the 1917 to 1927 time frame of the company. It’s a good guess that it either contained Christo-Cola or Ginger Ale. How and why it ended up on Long Island…who knows?