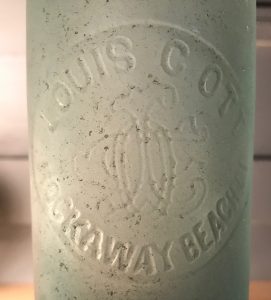 Louis C Ott was a hotel owner in Rockaway Beach (previously called Oceanus) from the late 1880’s until the late 1910’s. He was also active in the local democratic party serving as a NYS Assemblyman in the early 1890’s and later as a Town Supervisor in the late 1890’s and early 1900’s. Also active in the community, he served as a fire warden and a member of the Board of Representatives of the “Oceanus Hook and Ladder Company No. 1.”

Ott’s hotel business appears to have been closely tied if not one and the same with the liquor and beer trade. The first mention of Ott that I can find is as a liquor tax certificate holder with the town of Hempstead. (Note that at the time Rockaway Beach was under the Jurisdiction of Hempstead and not yet a part of NYC.) He was listed with the classification “hotel”and located in Rockaway Beach, but no address was given. His certificate was paid up through September 4, 1890, which leads me to believe the business started at least a year or two earlier, sometime in the 1880’s.

Sometime during this period, Ott became an agent and bottler for the Joseph Fallert Brewing Company. Advertisements in the local newspaper, “The Wave” between 1896 and 1898 bear this out and the 1899 Trow Business Directory listed the business on Hammels Avenue (now Beach 85th Street) under the heading “Bottlers of Lager Beer.” 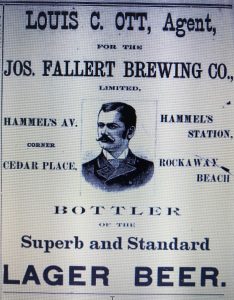 Whether Ott’s relationship with the Fallert Brewery dated back to his 1890 liquor tax certificate is not clear, but by 1899, it appears that the two entities had a falling out. On April 26, 1899, the Brooklyn Daily Eagle announced a judgement against Ott in favor of the Joseph Fallert Brewing Company for $7,308.40.

In 1900, Ott took over a hotel previously run by an Assemblyman from New York City. That year, in May, “The Wave” reported:

Around 1904 Ott’s listed location changed again and he was named in various newspaper articles as the proprietor of the Grassy Point Hotel located at Broad Channel on the Jamaica Bay trestle. Both the 1904 Trow Business Directory and the 1910 census records listed him at this location. In fact, The August 16, 1911 issue of the Brooklyn Daily Eagle reported that he spent his 57th birthday there.

Louis C. Ott, former Assemblyman from the Sixteenth District of Brooklyn celebrated the fifty-seventh anniversary of his birth at a family dinner at the hotel of which he is proprietor, the Grassy Point, on Broad Channel on the evening of Tuesday last. The table was placed lengthwise of the long dining room, covers being laid for twenty-four. The decorations were asters and gladioli, a huge horseshoe of asters  being placed on a table just back of the host, a gift from friends and sent with many wishes for good fortune.

More than just a hotel, Grassy Point was a resort that included a restaurant, dancing, bowling alleys, billiards, a fishing station, bathing, boating and ball fields. A photograph contained within a 1908 advertisement left no doubt that by then, Ott had switched his allegiance from Joseph Fallert to Trommer’s. 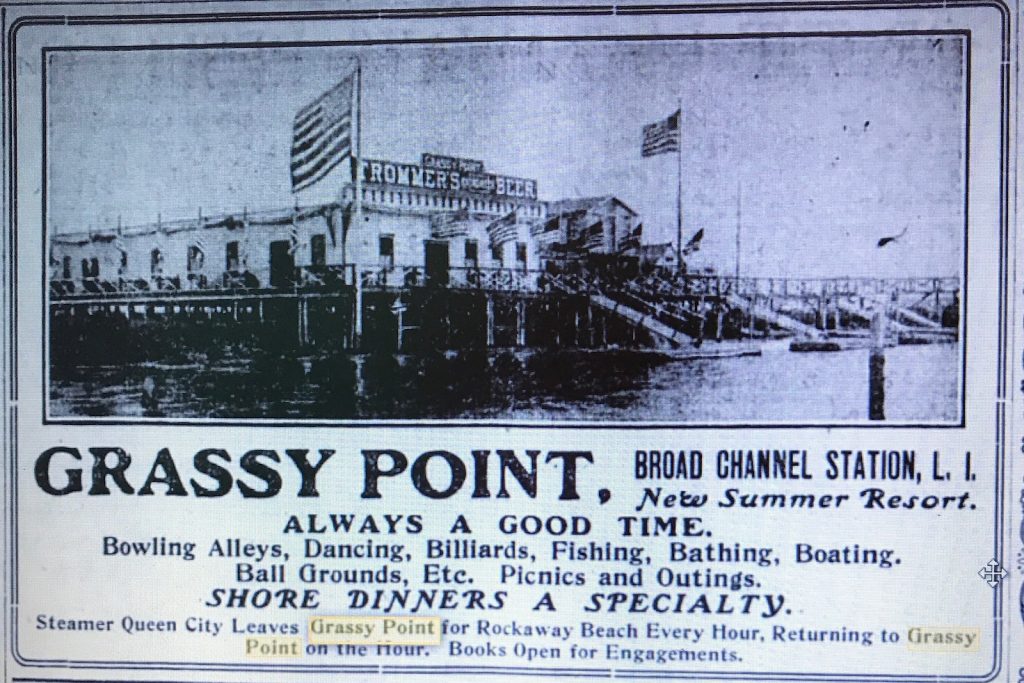 The Grassy Point Hotel remained in operation until it was destroyed by fire in January 1939. According to the January 5, 1939 issue of the Brooklyn Daily Eagle, the damage had been extensive enough to require rebuilding of the structure. At the time of the fire, the operation consisted of only a restaurant and grill. No rooms were rented.

Ott, a New Yorker of German heritage, had nine children, including six sons. Four of those sons were members of the U.S. armed forces during World War I and at least three were involved in active combat. According to an October 30, 1918 article in the Brooklyn Daily Eagle:

Pvts. Harry and Walter Ott, sons of Louis C. Ott of Mineola Ave., Valley Stream, L.I., have both been wounded. They were drafted in 1917 and trained at Camp Upton before departing for France. Walter is 22 years old and Pvt. Harry is 25. Both were engaged as chauffeurs prior to their entrance into the service. Walter, who is a member of Co. G 308th Inf. was wounded on August 17th. Just when Harry was hurt is not known. He wrote his father a note from a hospital ship stating that he had been injured and that he was on his way to London. A third brother, Sgt. Andrew Ott, is stationed at Camp Sevier in South Carolina, giving instruction on gas masks. He too, was drafted in 1917, sent to Camp Upton, where he received his sergeant’s chevrons, and finally to France. There he was gassed and after three months of continual trench duty ordered to return to America. He was a member of Company D, 305th Inf. He is 27 years old and was formerly a silversmith, employed by the Gotham Company in Manhattan. A fourth brother, Robert Van Wyck Ott, is eligible for the new draft and is expecting his call momentarily.

The bottle I found is a champagne style beer with an applied blob top. The slug plate refers to Rockaway Beach, Long Island. This would indicate it was made in 1898 (the year Rockaway Beach became part of NYC) or earlier and most likely contained the Joseph Fallert brand.