A digestive aid, Forbes Diastase was described as:

a scientific production from malt, in a perfectly fluid, concentrated form, without sugar and readily aids digestion in any part of the alimentary economy without any objectionable feature

Until the mid-1920’s, it was not available to the general public but only sold to wholesale druggists from whom physicians could procure and prescribe it. 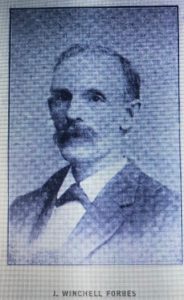 The early story of J Winchell Forbes and Forbes Diastase was printed in the January 1, 1893 issue of the Pharmaceutical Era and portions of it are summarized in the paragraphs below.

J. Winchell Forbes was born in Troy N.Y., in 1837 and in a peculiar pharmacy atmosphere, his childish playground being the upper stories of the drug store of his granduncle, the late John L. Thompson.

He started his pharmacy career in the drug and manufacturing house of Chas. F. Rogers in Lansingburgh, N.Y., but in 1859, lured by the California “gold rush,”he moved to San Francisco. After a short time, he was back in the pharmacy business out west, ultimately becoming a charter member of the California Pharmaceutical Society. After nearly 20 years in California and Nevada he returned east.

…he came to Cincinnati and at once obtained a position as superintendent of  an extensive laboratory in this city. In this position he remained nearly four years when he resigned in order to devote his entire time to analytical work and the study of chemistry and its collateral sciences, biological chemistry receiving the most attention…Reasearches in biology showed the necessity and a long series of experiments resulted in the production of Forbes Diastase during this time. Being without capital and unwilling to enlist that of others in what then was in the embryo stage, Mr. Forbes paid his expenses with his pen.

The story goes on to say that he worked as a writer and editor for several local publications until 1888 and:

then returned to analytical work and perfecting the details of manufacturing “Liquor Diastase,” as it was then called. In the latter part of 1890, these details being perfected, “The Forbes Diastase Company” was organized and the preparation placed regularly on the market. Mr. Forbes entire time is occupied with his duties as secretary of the company and general superintendent of laboratory details, and figuratively speaking, he has scarcely time to maintain a speaking acquaintance with his family.

Cincinnati directories from this era both confirm and supplement this early history and later complete the picture.

His four year employment as superintendent appears to have started in 1878 or 1879. J. W. Forbes was first listed in the 1878 directory and between 1879 and 1881 his occupation was listed as foreman (1879), superintendent (1880) and superintendent of Wm.S. Merrel & Co. (1881). Wm. S. Merrell & Co. described themselves as “Manufacturing Chemists and Wholesale Dealer in Foreign and American Drugs.”

He was listed individually as a chemist in 1882 and 1883. Then, in 1884, he was listed as the superintendent of the Standard Chemical Company, where he was manufacturing and selling the early version of his preparation called “Liquor Diastase,” that was at the time, as the biography states, in its “embryo stage.” This is confirmed by the following advertisement that appeared in an 1884 issue of the “Eclectic Medical Journal,” a publication of the Ohio State Eclectic Medical Association. 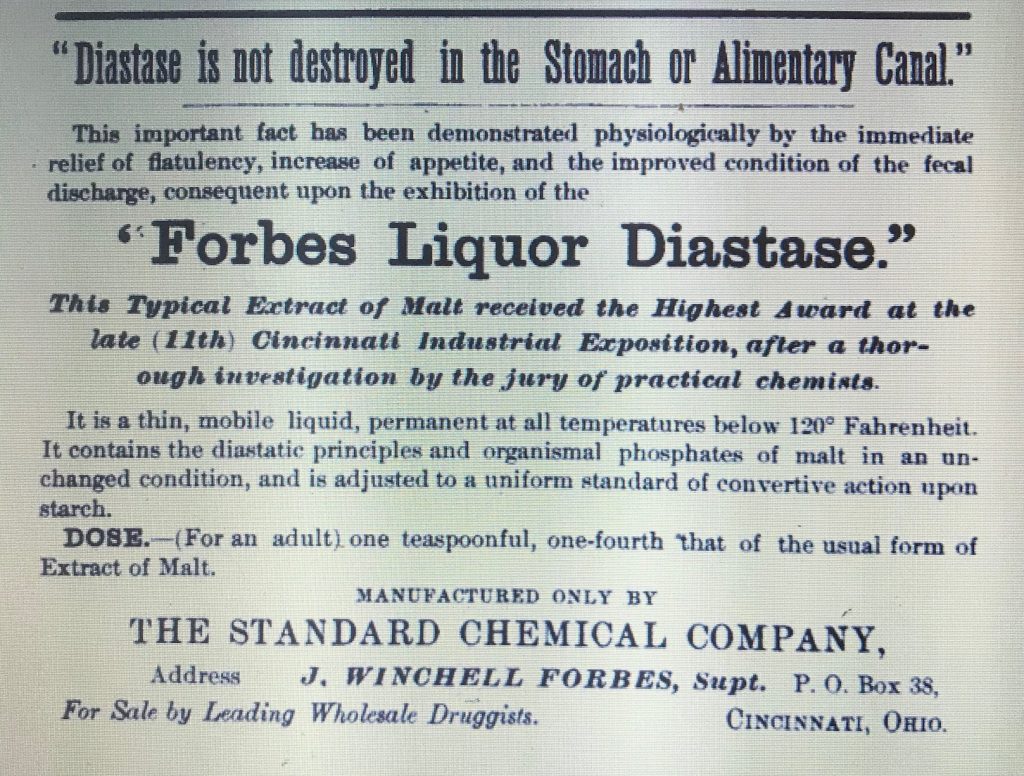 In accordance with the biography, in 1887 he was listed in the Cincinnati Directory as an editor but by the late 1880’s he was back listing himself individually as a chemist. Finally in 1890, the Forbes Diastase Company was listed in the Cincinnati Directory for the first time. R.D. Mussey was named president, Forbes was vice president and Paul Crosley and Wilmot J. Hall were treasurer and secretary respectively. The address was given as 74 Johnston Bldgs.

The following advertisement  in the Columbus Medical Journal, printed in July of 1890 has to be one of, if not their first ads. It starts out: “In presenting Forbes Diastase to the Medical Profession, we…” and appears to be completely introductory in nature. 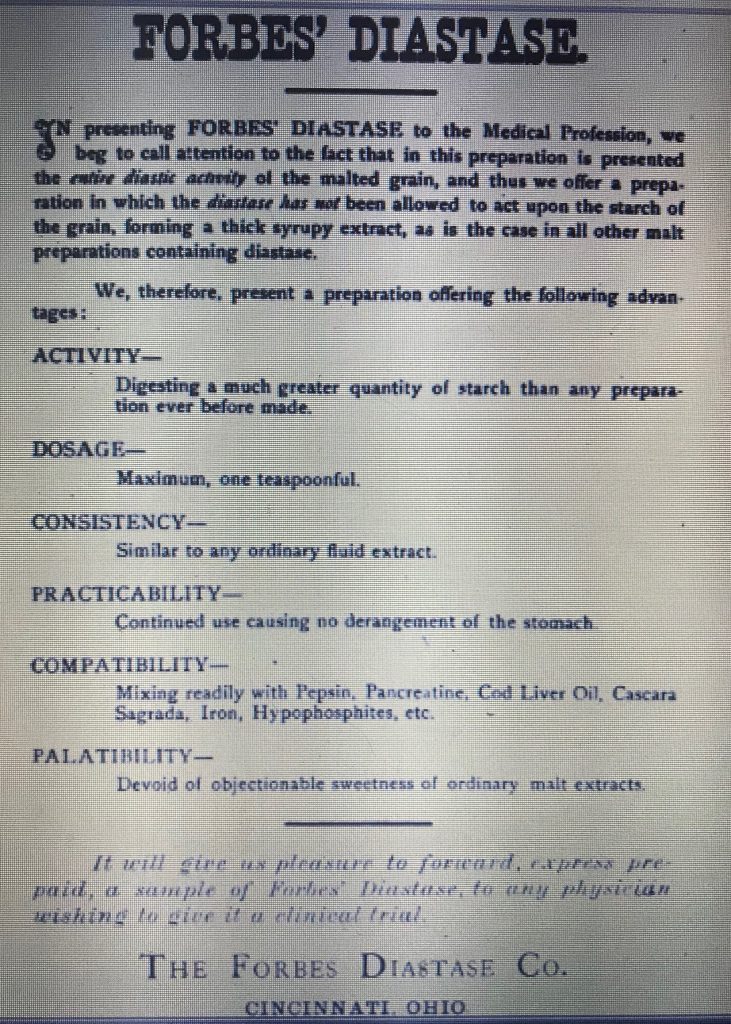 The 1891 directory listed two locations: the office at the northwest corner of 4th and Elm and the plant or laboratory at Locust near Elmwood Ave (later 1128 Locust). The business remained listed in Cincinnati until 1898, during which Forbes was listed with different titles from year to year; sometimes vice president, secretary, superintendent, but never president.

An item in the November 20, 1897 edition of the Cincinnati Enquirer announced that the company had just incorporated.

The Forbes Diastase Company of Cincinnati was incorporated today with a capital stock of $50,000, the purpose being to make and sell diastase and other chemicals.

The president was T.D. Dale and D.H. Buell was listed as treasurer and manager. It appears, at this point, that Forbes was no longer associated with the company. One month later the Marietta Daily Leader announced that the manufacture of Forbes Diatase was moving to Marietta, Ohio. The December 15, 1897 issue stated under the heading “New Business Building:”

Mr. D.H. Buell has broken ground for a new two-story brick building on the rear of the Hovey property, Third Street and close by the union depot. Mr. Buell will occupy his new building for the manufacture of Calabar Grains and Forbes Diastase.

In 1902 the company reincorporated and between 1902 and 1913 the Forbes Diastase Company was listed in the Marietta City Directory, with a Union Street location and Buell named as either president or proprietor. The 1906advertisement below, referencing the Marietta, Ohio location, is from the Memphis Medical Journal. 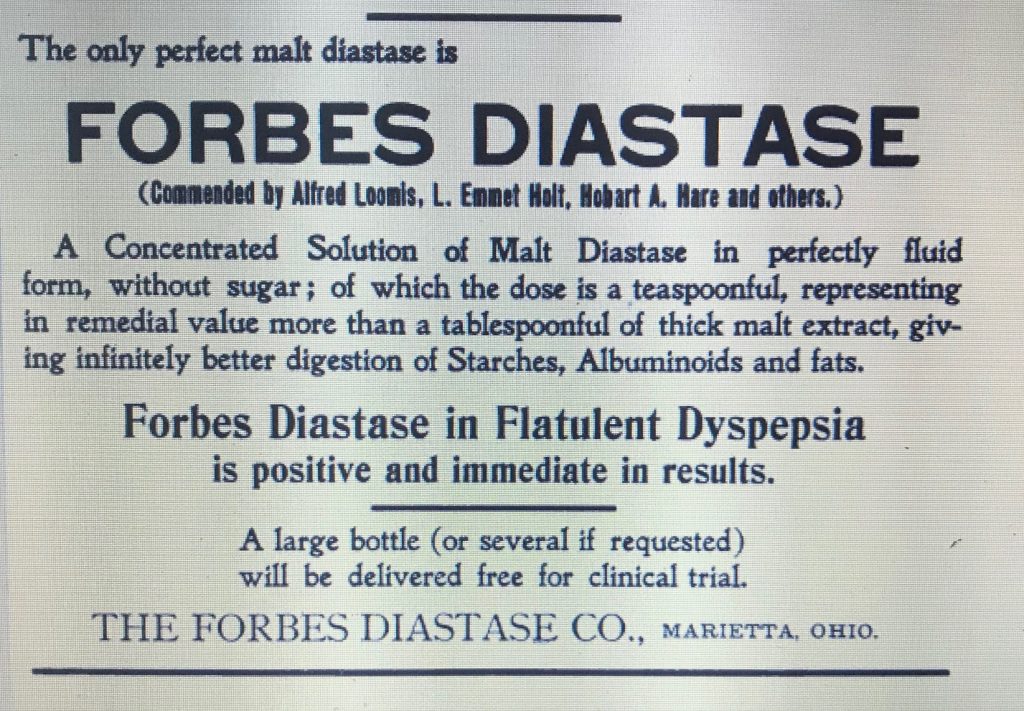 By 1913 it appears that the business was not headed in the right direction They reincorporated again in 1915 reducing capital from $50,000 to $10,000 and subsequently were no longer listed in the Marietta or ERA Druggist Directories. The business apparently remained operational because they were listed sporadically. I found them listed as Marietta Ohio manufacturers in the 1919 Modern Hospital Yearbook and the 1922 Druggist Circular.

It appears that the product went off the market for a stretch but returned in the mid 1920’s. A December 22, 1925 advertisement in the Richmond Indiana newspaper called the Richmond Item stated in part:

Prepared exactly as it was 40 years ago, Forbes Diastase is again on the market for use in cases where either an impoverished supply of diastase or other digestive disturbances require additional starch-digesting power.

No longer marketing to just the medical industry, their advertisements were now in general circulation newspapers and aimed at the general public.  Similar to many patent medicine advertisements of the time, they were presented to look like a typical news item. This one from the December 8, 1925 edition of the Star Gazette in Elmira New York was typical of their new approach. Under the headline: “Sent Home to Die from Incureable Stomach Trouble Recovers Almost Magically with Short Treatment of Forbes Diastase,” it goes on t say:

Today this is no longer a miracle to doctors who know and have been prescribing Forbes Diastase, and that means the majority of physicians – especially stomach specialists. But in 1892 when New York’s best known hospital gave up a chronic sufferer as hopeless and sent him home to die, his sudden recovery really seemed like a miracle. (letter testimonial X, 24, on request)

Forbes Diastase is in reality exactly the same marvelous diastase that is manufactured by the human system for digesting fats and starches, the Forbes Diastase can digest 1000 times its own mass of starch in five minutes.

Forbes Diastase does not eliminate. It digests. Therefore it is not only good for all people – it is positively wonderful for convalescents and sick folk whose digestive apparatus is below par. Excellent for building up thin, scrawny, under nourished children.

Forbes Diastase has been on the market for 40 years by prescription only. Everybody can now buy it – at these druggists: Kelly’s, Spillan’s Central, Trebell-Calkins drug store.

A series of these advertisements appeared over a six month period from December 1925 to May 1926 and only in limited geographic areas; upstate New York and Indiana. By the end of May the advertisements ceased for good and I have  to assume that the business didn’t last much longer.

In 1899, when Buell moved the company to Marietta, J. Winchell Forbes remained in Cincinnati and apparently continued to work on improving his diastase. On April 22, 1908 he established a corporation called the Dexigen Company and began manufacturing his improved product which he called Forbes Dexigen. An item in the November, 1908 issue of the Midland Druggist described the new operation.

J. Winchell Forbes, originator of Forbes Diastase, and well known to readers of pharmaceutical journals, is the president and general manager of the Dexigen Company, whose new laboratories have recently been installed at 347 E. Third St., Cincinnati.

Dexigen, a name coined from dextrin and generator is an improved form of diastase, is a much more powerful starch ferment than the varieties heretofore produced, and has the additional merits of definite strength and good keeping qualities.

It is the result of more than thirty years of study and experiment on the part of Prof. Forbes, and is believed to represent the enzymes of malt in the highest state of efficiency that has yet been attained.

It will be marketed strictly upon ethical lines, and we speak for it the favor of both pharmacist and physician which we believe its merits deserve.

The Cincinnati directories listed the Dexigen Co. at 347 E. 3rd from 1909 to 1911 with Forbes named president in both the 1910 and 1911 editions. Forbes passed away sometime in 1911 and the company is not listed after his death

The bottle I found is mouth blown with an applied lip. It’s embossed “The Forbes Diastase Company” and the embossing includes the Cincinnati Ohio location. This dates it between 1890 when the business started and 1898 when it moved to Marietta, Ohio.