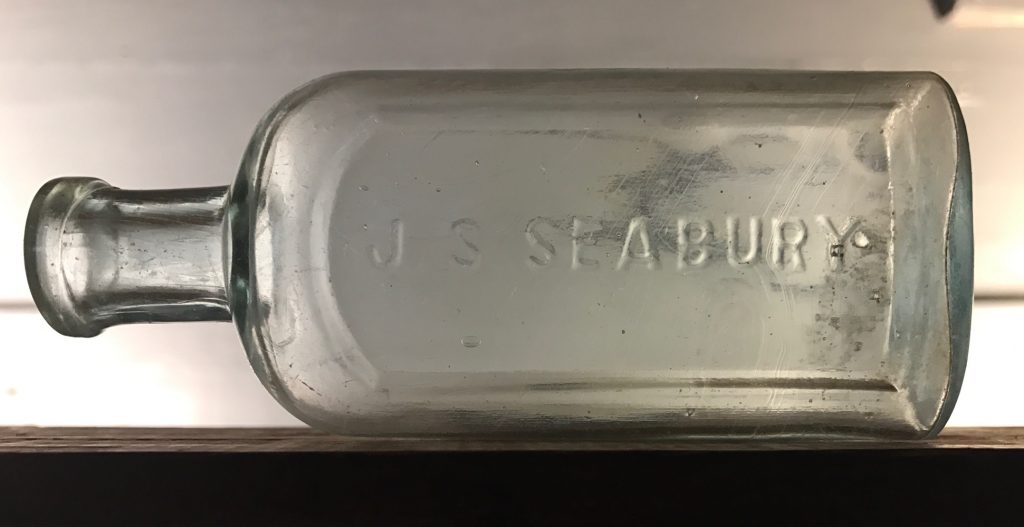 The J stands for John S Seabury. Born in 1811, he was a druggist and patent medicine proprietor from the 1830’s to at least 1882. He died in 1888. His obituary, printed in the November 1, 1888 issue of the ‘Pharmaceutical Record” states” John S Seabury, a well known druggist of Jamaica, New York and also in former years of this City, (NY) died at his home a few days ago. He began in business at New Rochelle, was later at Jamaica, and at one time was a member of the firm of Pinchot, Bruen & Seabury of this City (located on Fulton Street). He had an excellent reputation as a druggist and a citizen. He was 77 years of age.

It’s not clear when Seabury moved from New Rochelle to Jamaica, but J. S. Seabury & Co. of Jamaica was listed as an authorized agent for “Brandreth’s Pills” in the August 20, 1839 issue of the Long Island Star so he was doing business in Jamaica by then.

Around this time he was involved with at least two different proprietary products. One was for “Vestamental Soap” advertised in a July 1840 issue of the Long Island Farmer. It stated:

For removing grease spots, paint, etc. from woolen cloths. This is a new article lately invented by Mr. John S Seabury, Druggist, New Rochelle. The proprietor contents himself with merely stating in the label upon each bottle, the purpose of which it is intended, and the method of application; leaving those who choose to give it a trial to judge of its merits. We can say that we have never seen anything half so well adapted to removing spots from woolen garments as the Vestamental Soap. Price 25 cents a bottle. For sale at the New Drug and Book Store, by C. S. Watrous.

The other was called Hawkshurst’s Opodeldoc or Rheumatic Embrocation. The 1841 advertisement in the Long Island Farmer stated:

an effectual and speedy remedy for rheumatism, cramps, sprains, bruises, wounds, stiff joints, sore throat, pains in the chest, side back, etc. prepared for many years by the late John Hawkshurst of Newtown Long Island. The subscriber having procured the original recipe for preparing this embrocation, the genuine article will in future bear his written signature on the directions accompanying each bottle…Certificates of the most respectable character to the efficiency of the above medicine might be procured but the subscriber deems it unnecessary, as he authorizes every vendor of the article to refund the money for any part of a bottle of the embrocation which may be returned, should it not prove as represented.

By 1849 he owned a drug store in Jamaica called “Seabury’s Hall of Pharmacy”. According to an advertisement in the L I Farmer in the early 1850’s it was advertised as a general store as much as a pharmacy, selling an assortment of products such as paints, books, stationary, window glass and lamps in addition to drugs and medicines.

Over the years, this store was turned over to an employee named George Peck, first operating under a partnership of Seabury and Peck. Ultimately around 1865 Peck became sole proprietor and changed the name to the “Hall of Pharmacy”

Seabury apparently continued in business on Long Island at other Jamaica locations until at least 1882. He was listed in Curtain’s Long Island Directory of 1868-1869 under patent medicines in Jamaica on Fulton St near Washington Ave and there’s an advertisement for Seabury’s Cough Balsam in an 1871 issue of the Long Island Farmer. The advertisement names Seabury as the sole proprietor in Jamaica. 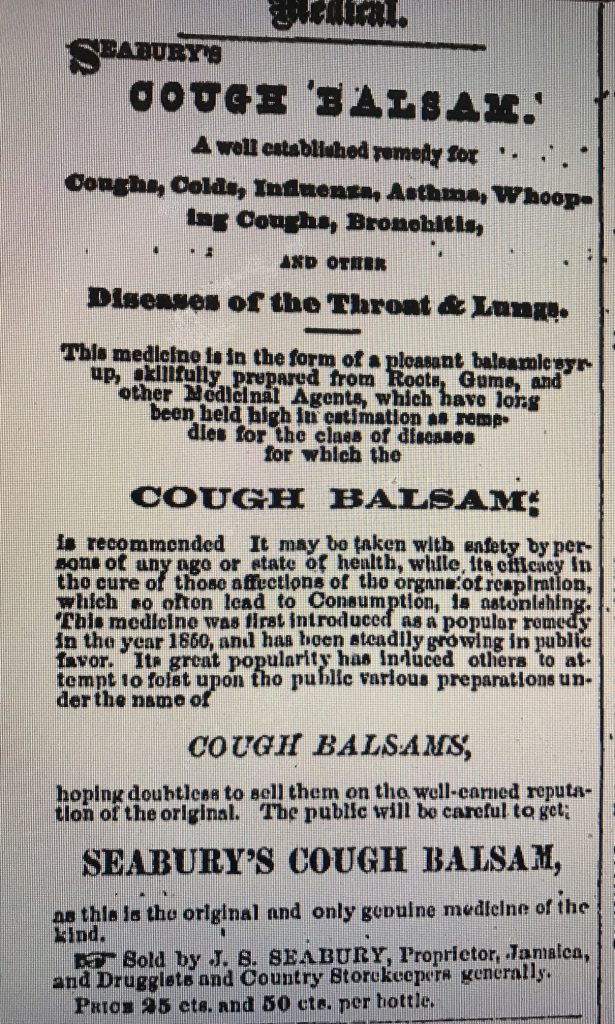 Finally, in 1882, Seabury is looking to retire. An 1882 issue of the “Druggist Circular and Chemical Gazette” carried the following item headlined as a Rare Business Opportunity:

Desirous of retiring from active business, I offer for sale a first class drug store in the Village of Jamaica L I, also a well established fire insurance agency representing some of the best companies in the State. I would also sell one or all of my popular proprietary medicines. The above would be sold together or separately as desired. Address for particulars J S Seabury, Jamaica L I.

It’s not clear if and when he sold out.

The bottle I found is a small (approximately 2 oz) medicine with an applied finish and only the Seabury name embossed on it. It probably contained a proprietary medicine (maybe cough balsam?) from the Fulton St location.