The L stands for Louis Steinberger. His business was listed in every Jersey City directory I can find between 1883 and 1925. The directories listed his occupation as either mineral water or soda with an address of anywhere between 496 and 502 Pavonia Avenue. According to his obituary in the March 14, 1933 issue of the Plainfield N.J. Courier News, he served as president of the Steinberger Beverage Company up until his death in 1933.

The February 15, 1904 Issue of the American Carbonator and American Bottler referenced him as a manufacturer of all kinds of mineral waters, root beer in fountains, fruit syrups and extracts.

He apparently was the local bottler for regional/national brands as well. The American Carbonator item stated that he was the sole agent in Jersey City for Sheboygan Mineral Water and he was the local Jersey City bottler for Ward’s “Orange (and Lemon) Crush.” This is confirmed in several “Orange Crush” advertisements printed in the “Brooklyn Daily Eagle” between June and August of 1920.

The business appeared to be a small, family run affair. Some directories listed Louis’s residence as 502 Pavonia Avenue with the business address at 496 or 498 Pavonia Avenue. So he probably lived adjacent to the business. The 1910 census records listed Louis’s occupation as the proprietor of a mineral water manufacturing business. His sons Louis Jr. and Claude were listed as superintendent and wagon driver respectively.

By 1920, Louis Jr.’s occupation was listed as “manager, soda factory” and Claude was “salesman, soda company,” but it wasn’t until 1925 that the sons were reflected in their Jersey City directory advertisements.

The business continued into the late 1930’s and possibly early 1940’s. The 1930 and 1940 census records listed Claude as “treasurer, beverage industry” and “salesman, beverage manufacturer” respectively. In addition, advertisements for Steinberger Beverages were prevalent from 1934 to 1936 in the Courier News. Most involved Steinberger Beverages association with the Plainfield Courier-News Cooking School. 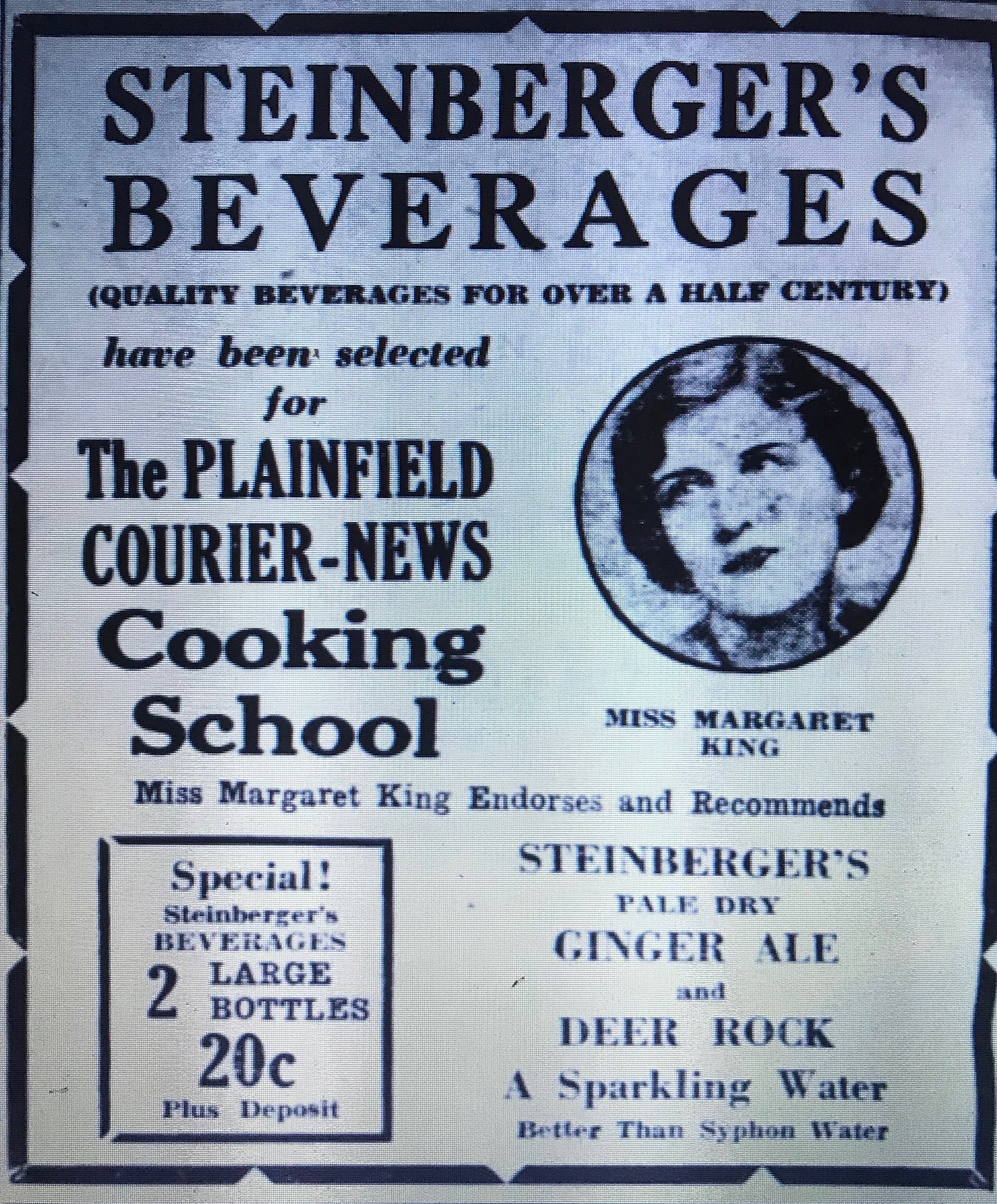 The end date of the business is not clear, but I don’t see any advertisements for Steinberger Beverages in the 1940’s.

According to Zillow.com, 502 Pavonia Avenue is a single family home built in 1877. This fits with the directories that list 502 Pavonia as Louis Steinberger’s residence. Today, the building at 496 Pavonia Avenue appears to be a renovated four-story walk-up that’s been converted to apartments. It could also date back to the business.

Steinberger obtained a patent for his bottle design on November 14, 1922 although he was apparently using similar designs as far back as the late 1800’s. (There are examples of mouth-blown bottles with blob finishes on the Internet.) 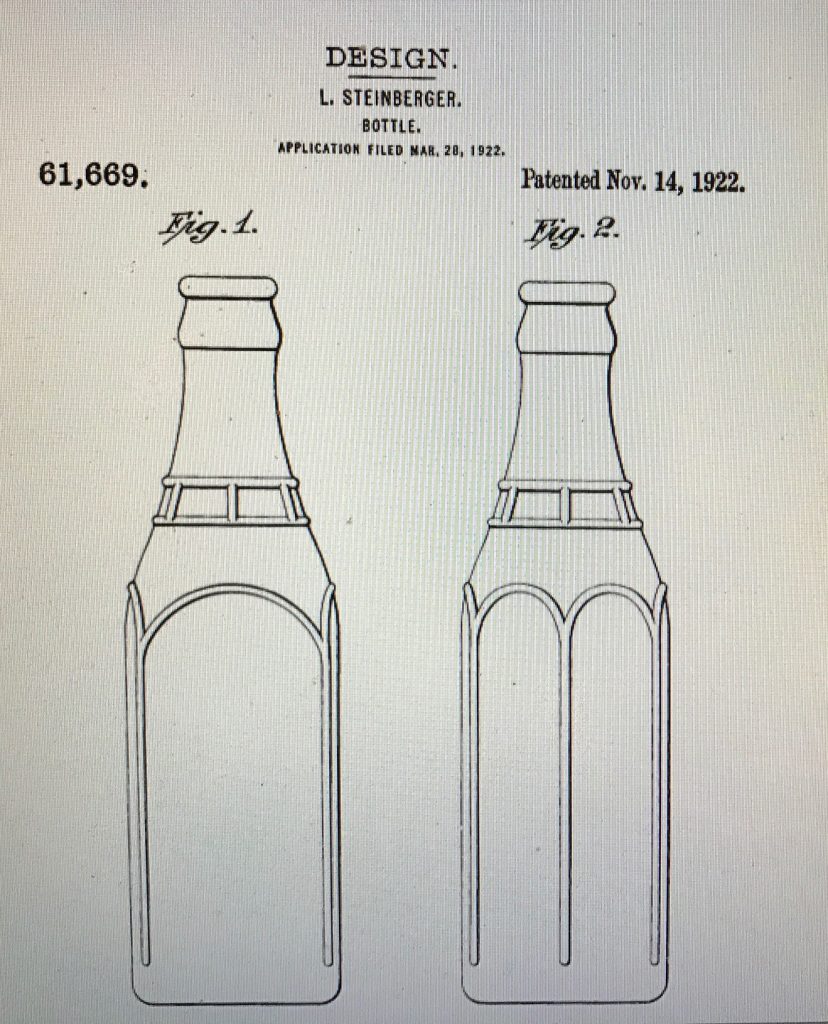 The bottle I found is machine made and similar in design to the patented design although it’s missing the double ring at the base of the neck that’s shown on the plans.

Steinberger also obtained a patent for the trademark “With The Taste That Tempts.” Trademark 210,660 was registered on March 16, 1926 but the documents indicate that it had been continuously used in the business since January 15, 1915. Note that the phrase was used in the 1925 advertisement shown above. 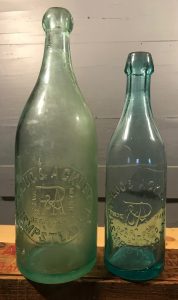 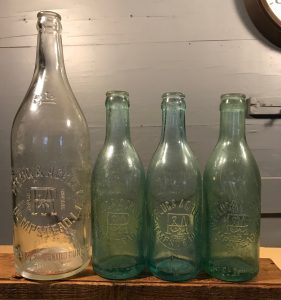 The founders of Pflug & Ackley were Daniel Pflug and Henry Ackley. Pflug was a German immigrant who arrived in the United States in 1880. Ackley was born in Lynbrook, New York and was a life-long Long Islander.

The company was apparently established in 1881. At that time, a news item published in the April 22, 1881 edition of the Roslyn (L. l.) News stated that Ackley had partnered with Pflug after leaving the bottling business of Elbert Matthews.

Alfred Matthews, former Keeper of the Town Poor House, has entered into partnership with Elbert Matthews in the lager beer and soda water business. Henry Ackley, foreman in Elbert Matthew’s establishment has entered into partnership with Pflug of Washington Square, in the same business. They have leased the Mearing building on Greenwich Street and moved it flush with the pavement.

The Hempstead section of the 1890 Lain’s Business Directory under Hempstead listed their address as 33 Greenwich. They would remain at that location as late as the early 1950’s.

In early advertisements, like this one published in the September 4, 1886 edition of the Roslyn News, they also referred to the operation as the Enterprise Bottling Company. 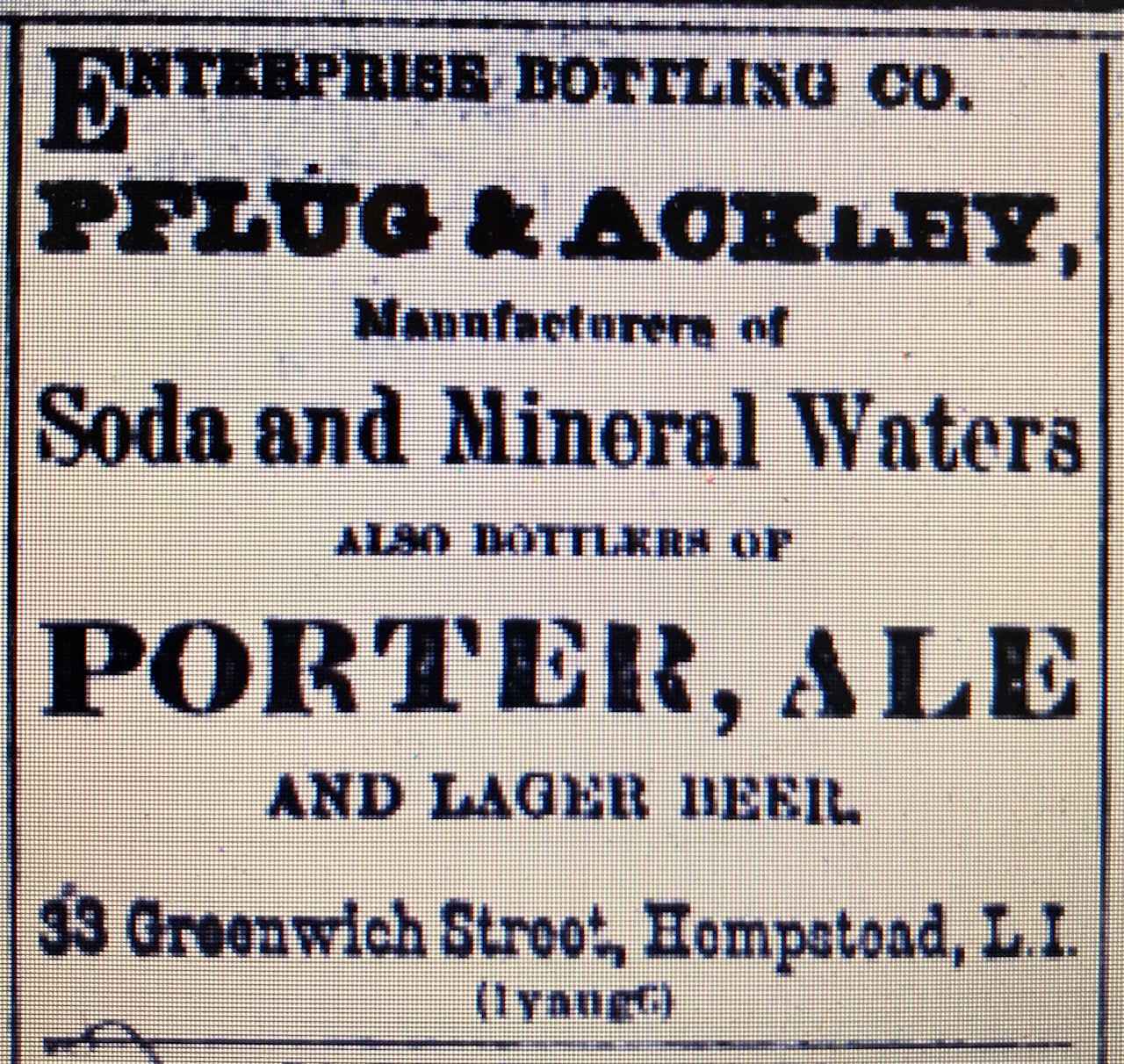 Apparently a small operation, the “Annual Report of the Factory Inspectors of the State of New York in both 1899 and 1900 indicated the business had 6 employees during that time, all male.

Primarily a bottling operation, in the early years they also manufactured something called steamed beer, as evidenced by this June 22, 1889 item in the Roslyn News.

Pflug & Ackley of Hempstead, have added a steam engine to their bottling facilities. They are now prepared tp furnish parties promptly with their well-known steamed beer.

Later that year their steamed beer (two kinds?) was included in this October 12, 1889 Roslyn News advertisement. 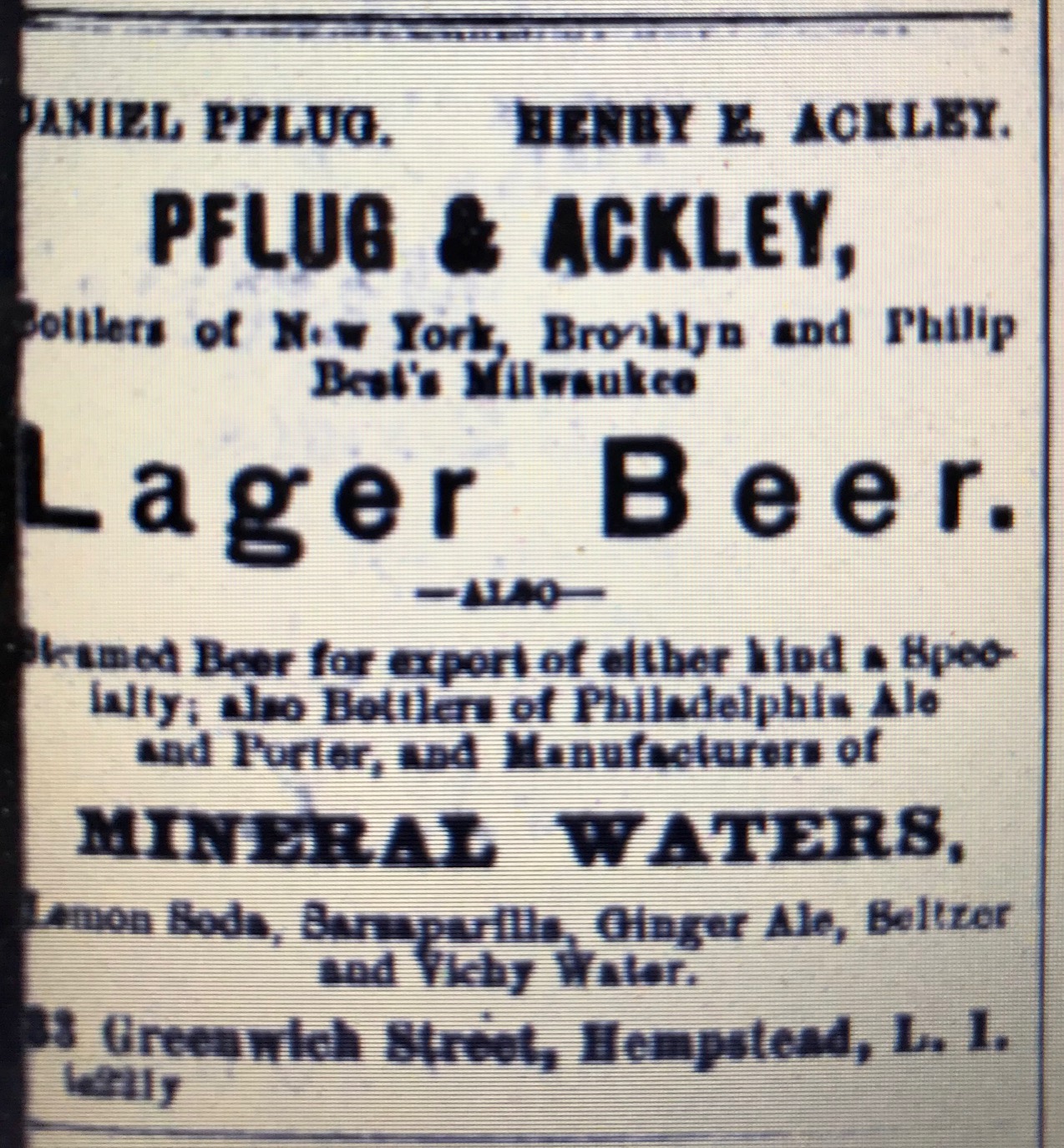 A 1914 advertisement that appeared in several summertime editions of the Nassau Post indicated that by that time, in addition to mineral water and beer, the company was also bottling wine and liquors. 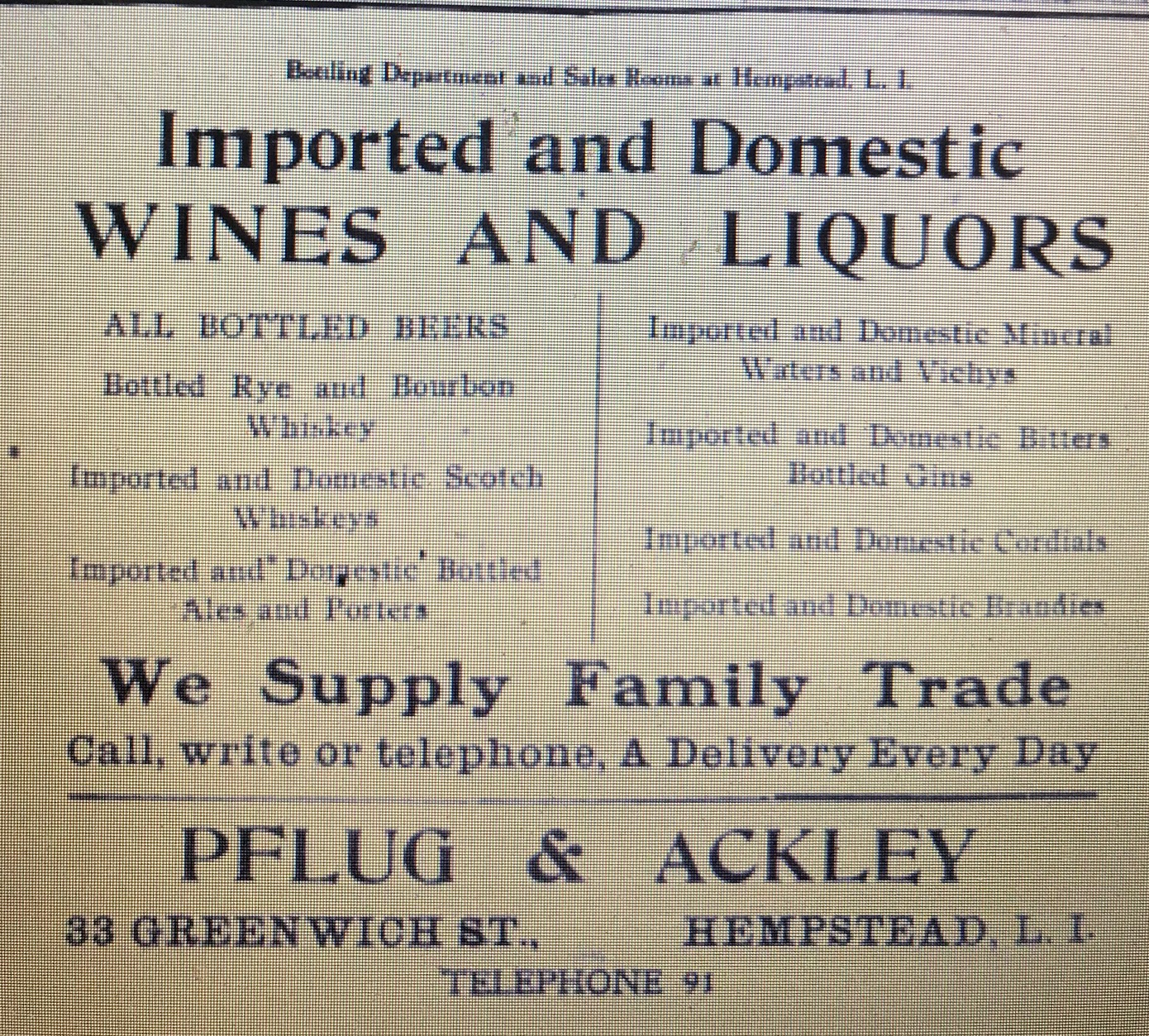 The same 1914 advertisement also included this photograph of their “Bottling Department and Sales Rooms in Hempstead L.I.” 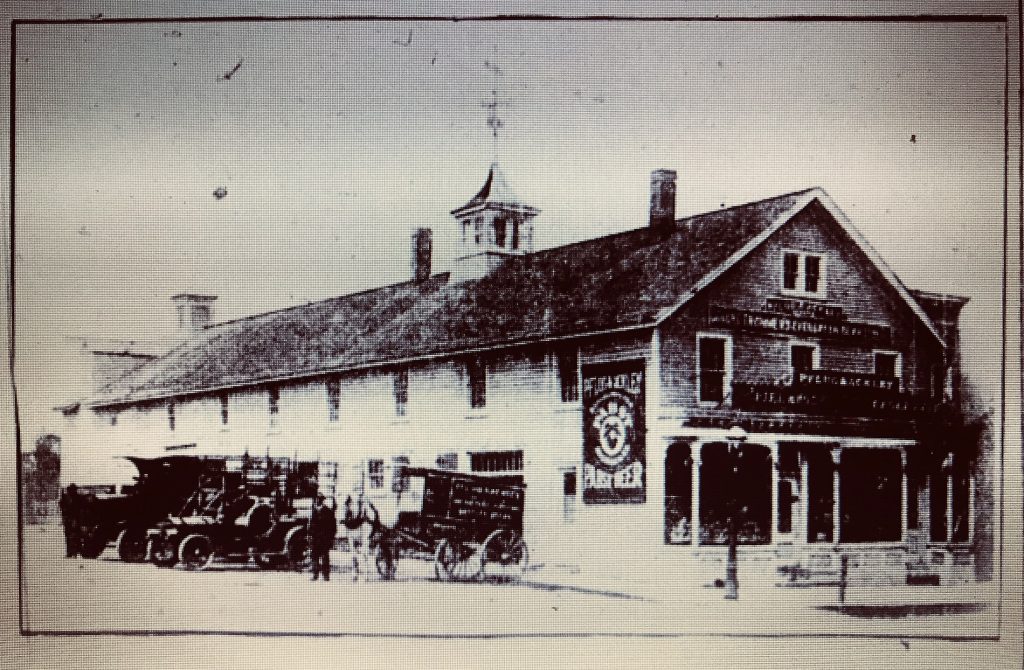 An article under the Headline “Makes Good Beverages” in the December 17, 1925 edition of the Hempstead Sentinel provided a snapshot of the business at that time.

One of the oldest established firms in Hempstead is the Pflug and Ackley bottling works at the corner of Greenwich and Prospect Streets. The name has been synonymous with good beverages extending over nearly three generations. At the present time the business is managed by William H Ackley, who has a reputation for progressiveness.

Mr. Ackley keeps pace with all the newest methods, particularly those for the manufacture of the purest of products under the best sanitary conditions. He has recently installed machinery that has done away with much of the labor of human hands.

Mr. Ackley reports that although he is daily securing a large quantity of cider for the holidays there is such a demand for it that his delivery trucks are kept busy filling the orders of customers.

There was a P&A advertisement in the same December 17,1925 issue of the Hempstead Sentinel for Russet Apple Cider. 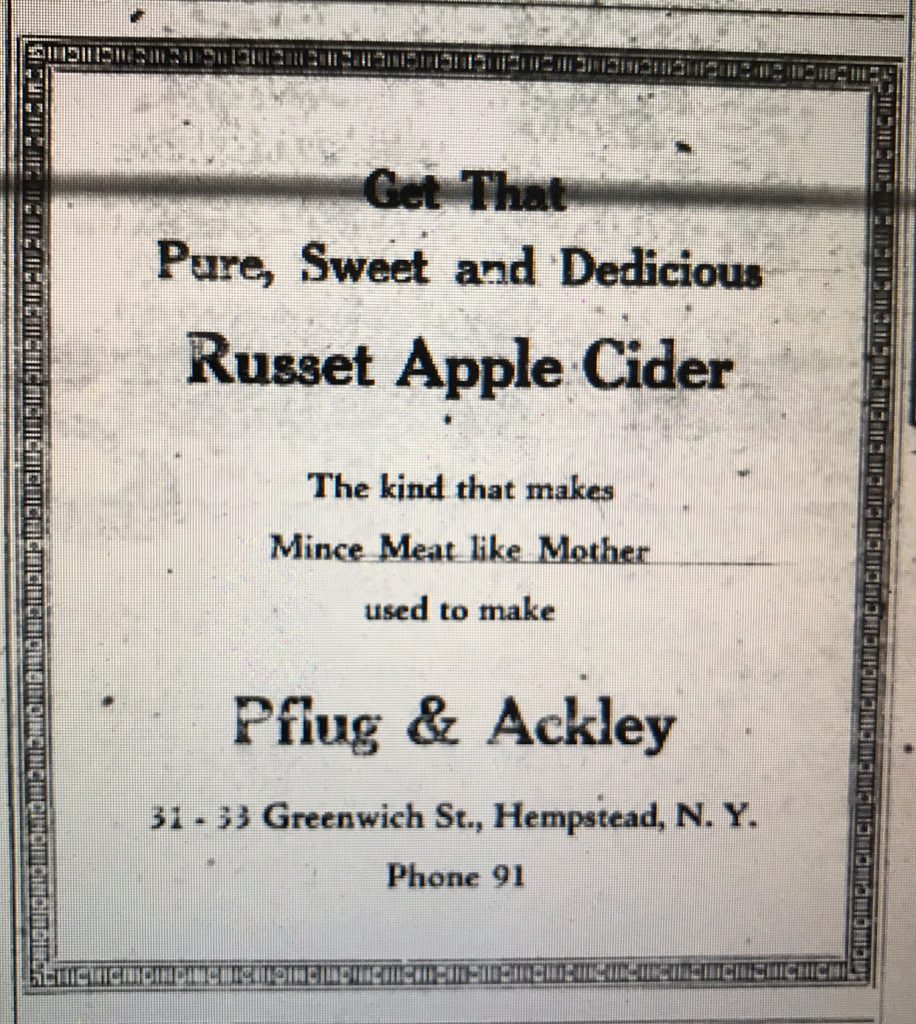 During the 1920’s the company was serving as the local Nassau County bottler for Ward’s “Orange (and Lemon) Crush as evidenced by a series of 1920 Brooklyn Daily Eagle” advertisements. 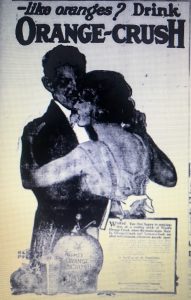 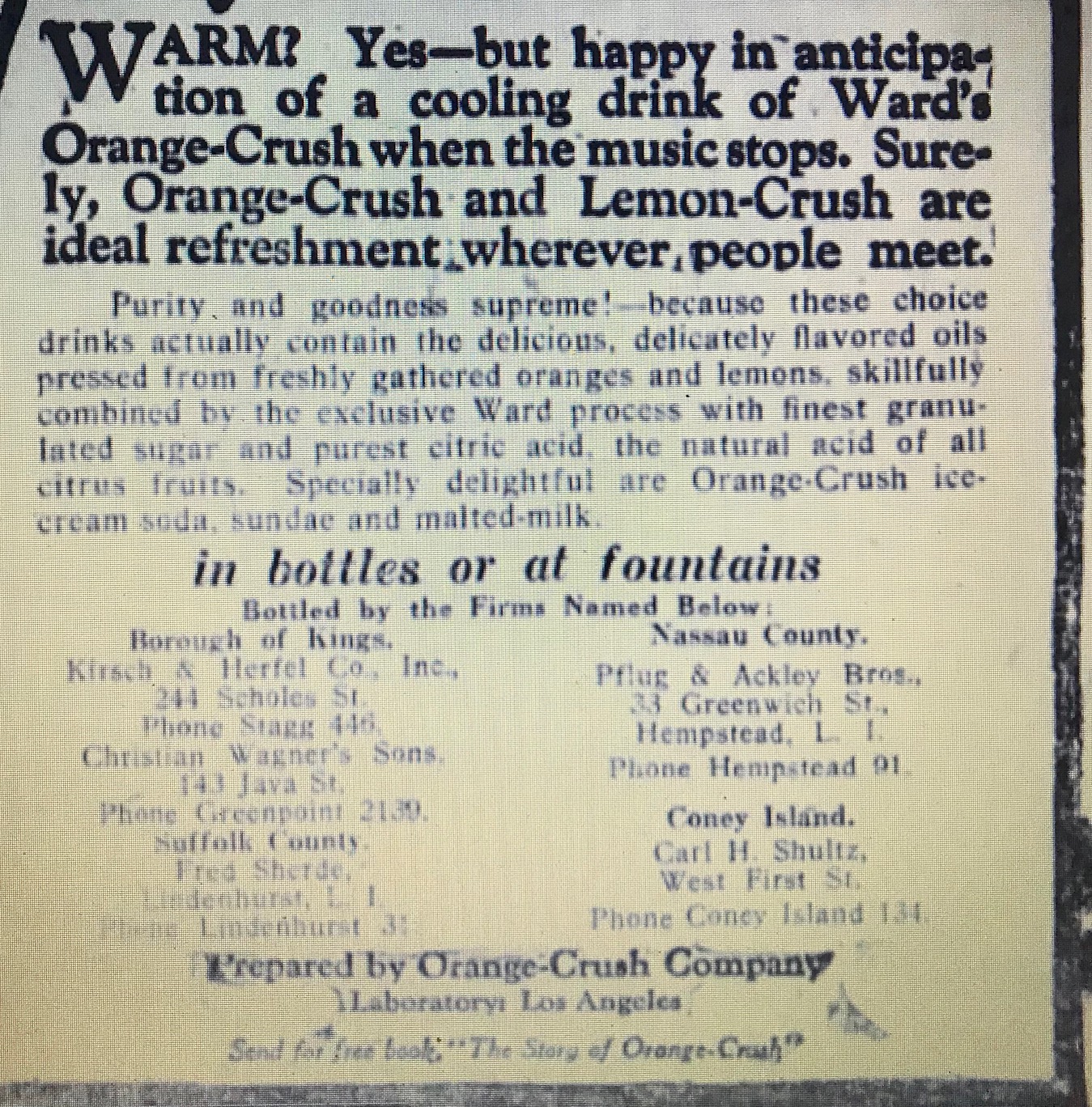 By the mid-1930’s the company had apparently changed its name to the Ackley Beverage Company. I’ve found shards of a bottle embossed Ackley Beverage Co, Hempstead NY on the base that includes a 1938 embossed date. The embossing is very similar to the Pflug & Ackley embossing.

33 Greenwich Street does not exist today nor can I find Prospect Street in Hempstead. The address would have been located near the intersection of Greenwich and Peninsula Blvd and was most likely acquired when Peninsula Boulevard was widened to its present configuration.

This business spanned the conversion from mouth blown to machine made bottles and I’ve found both types. Mouth blown ones include two blob tops,  a champagne style beer (12 oz) and a large 27 oz, and several 8 oz tooled crowns, one embossed with the year 1917, another with 1918 and still another with 1919. The dates appear within the slug plate, right below the trade mark.

Machine made finds include a 27 oz bottle embossed with the year 1926 and a 6 oz Orange Crush. The Orange Crush bottle has the P&A monogram and “Hempstead,”embossed on the base. 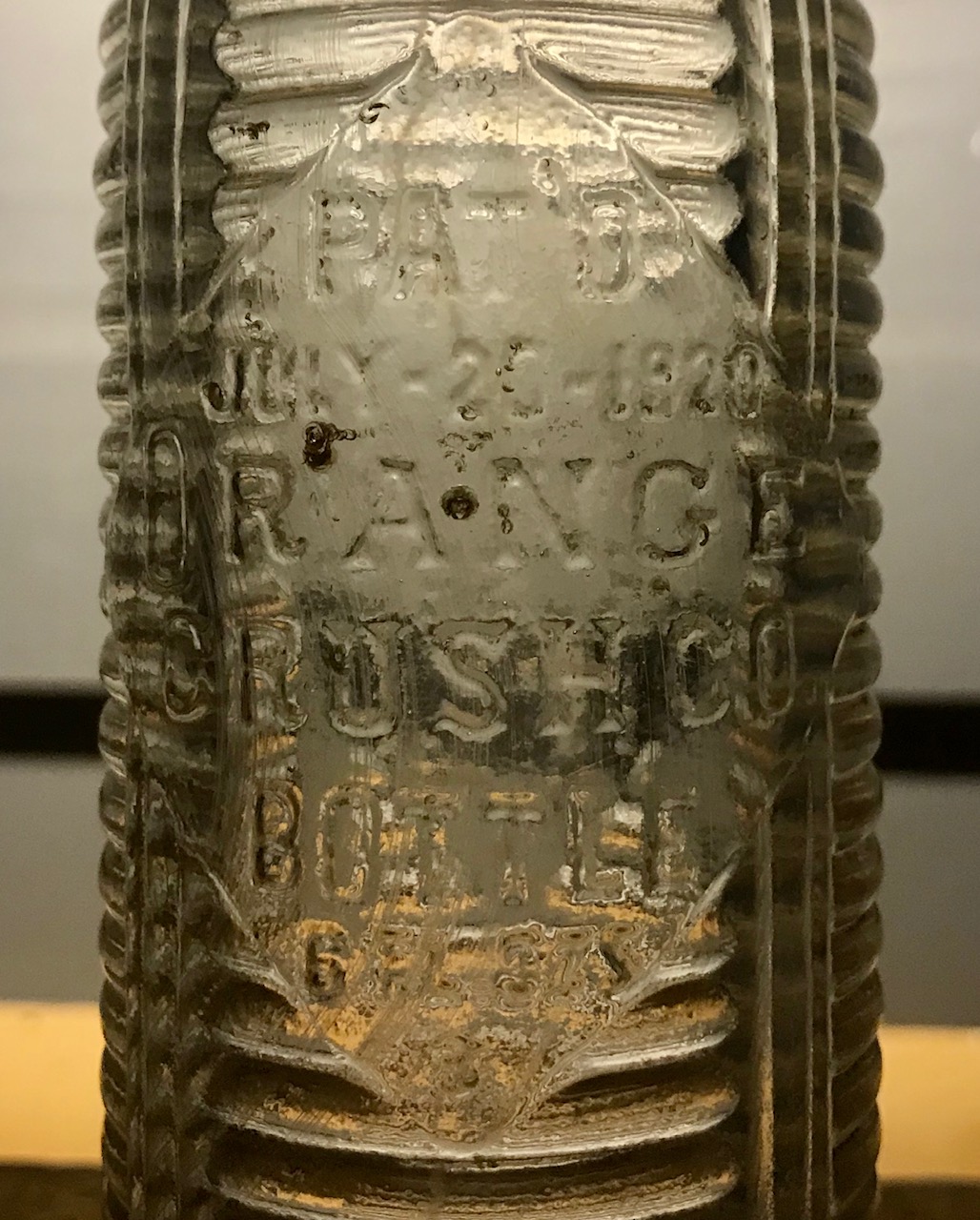 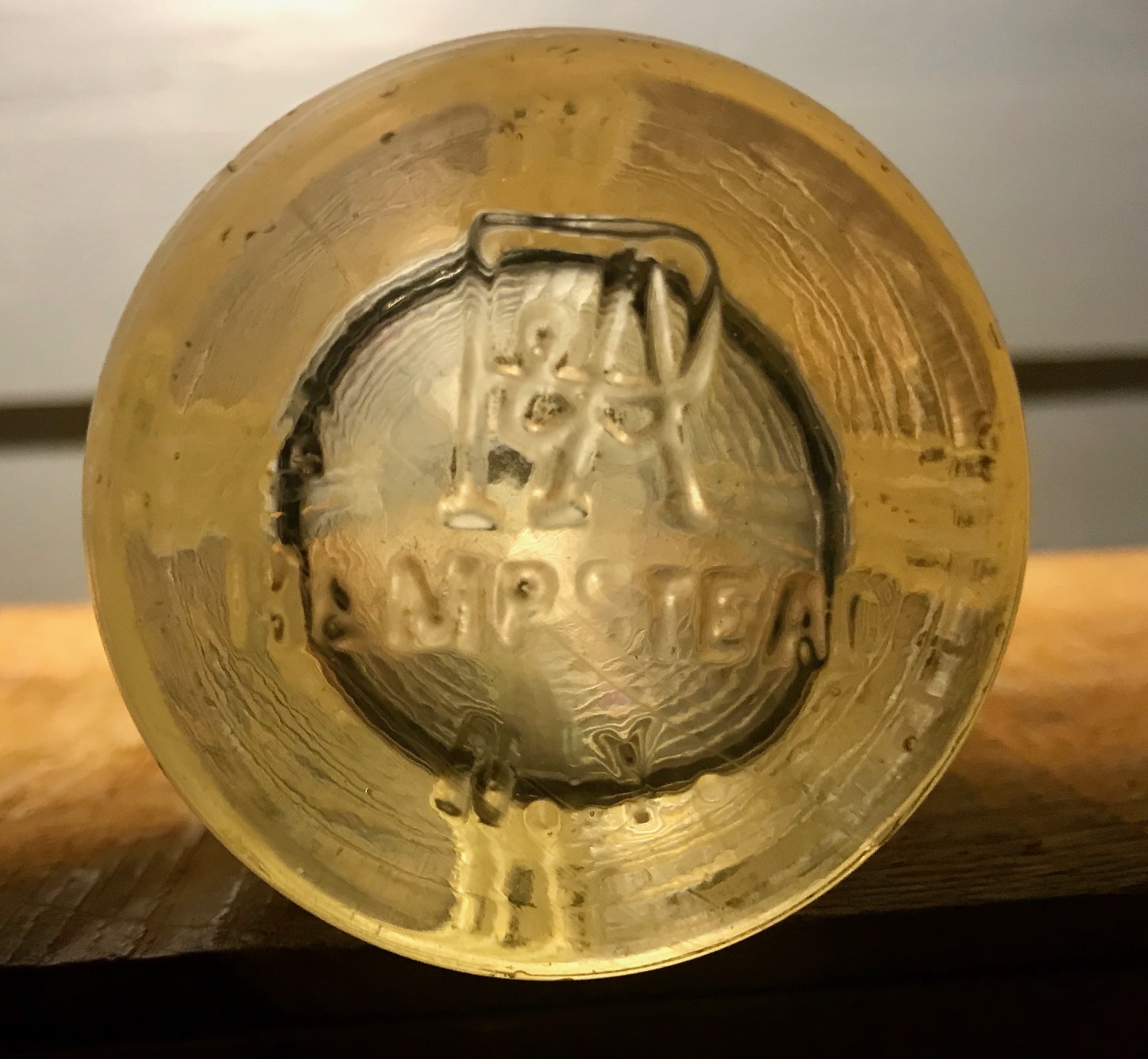 On a final note, a Pflug and Ackley weather vane was recently offered for sale on the internet. It could actually be a portion of the one visible in the photograph of their bottling department and sales room. 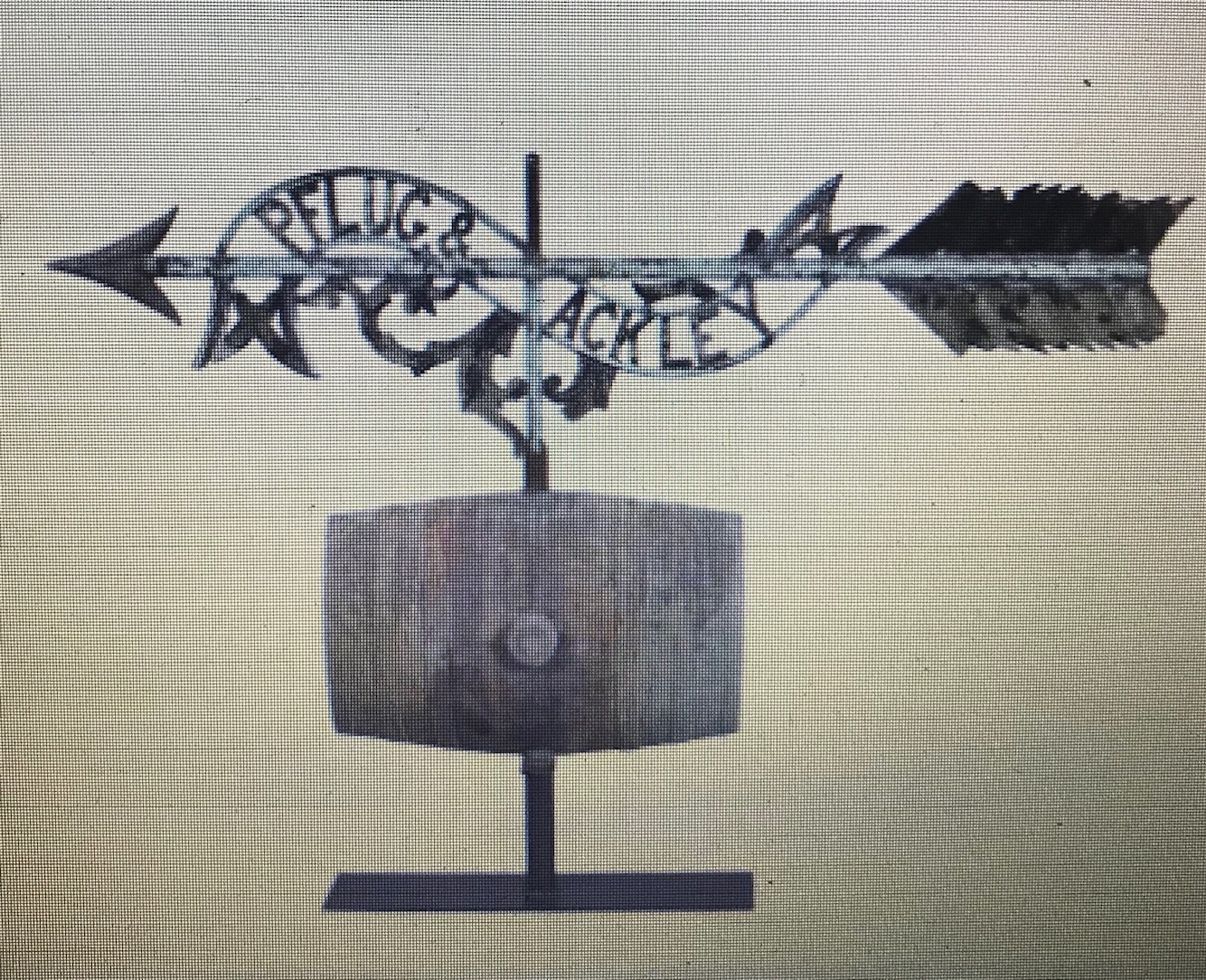 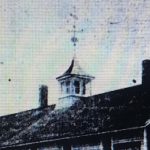