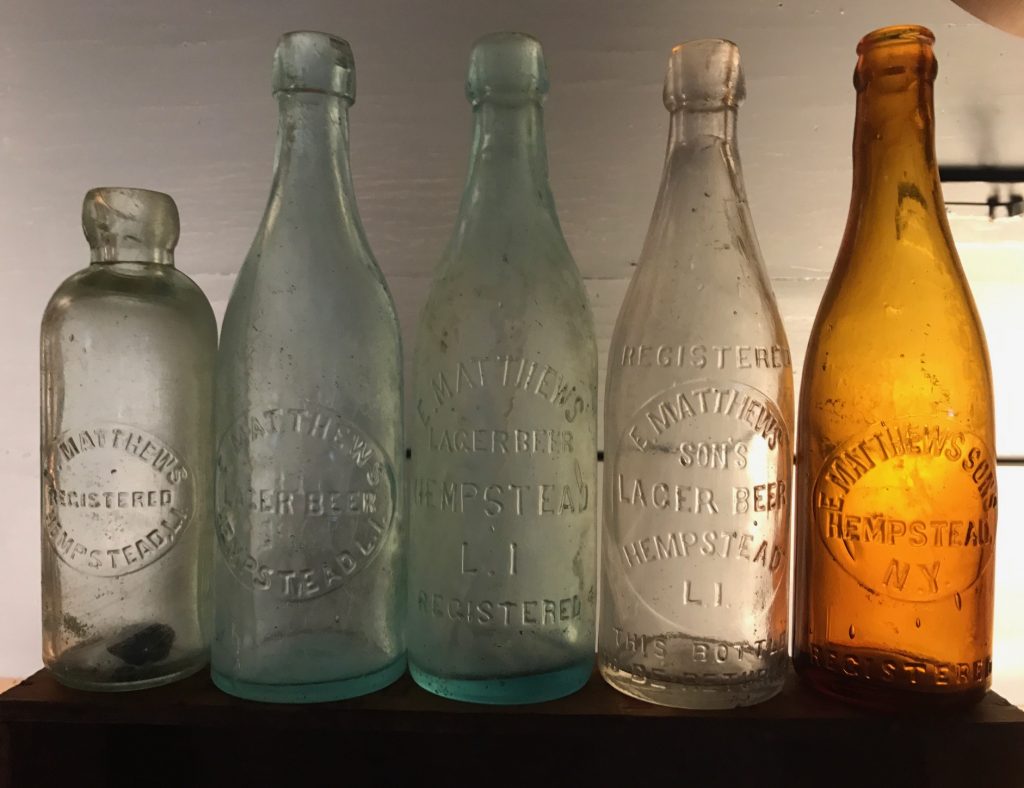 According to the “History of Long Island” dated 1903, Elbert Matthews was a life-long resident of Hempstead. At the time of his death in 1891, he was proprietor of the Long Island Hotel and ran a business bottling soda and mineral waters. He ran the hotel for twenty years (dating it to 1871), but the story is not clear on how long he had the bottling business. The 1880 census lists Matthews as a manufacturer of soda water so it probably dates to the 1870’s as well. His widow managed the businesses from the time of his death until 1899 when two of his sons, Irvin A and Charles Seaman purchased it and changed the name to E Matthews Sons. As of 1903 the sons continued to run the business.

An article in the December 7, 1892 edition of the Brooklyn Daily Eagle adds to this information:

Mary Matthews is the widow of the late Elbert Matthews whose success in the bottling of mineral waters brought him a fortune and an extended acquaintence in Queens County. Mr. Matthews died a year ago leaving his property to his wife. His real estate included the bottling establishment and the Long Island Hotel, a well-known hostelry in Hempstead Village. After her husband’s death, Mrs. Matthews employed a superintendent to run the bottling business and also concluded to run the hotel with the assistance of a hired man.

The August 1, 1947 issue of the “Nassau Daily Review Star” made mention of Matthews saying that at some point they took on a brewery agency and sold to all sections of Hempstead and North Hempstead. Takeover of the brewery agency had to occur prior to the sons purchasing the business in 1899 because I’ve found bottles embossed lager beer both prior to and after the name change.

The presence of the business in the brewing industry was confirmed by an advertisement in a 1906 edition of the Hempstead Sentinel. The advertisement stated that they were the sole agent and bottler (I assume in Hempstead) for S. Liebman’s Sons Light and Dark Lager Beers, Piel Bros., Anheuser Busch, Pabst Milwaukee and S. Liebman’s Sons Teutonic. The advertisement also stated that they were bottlers for all kinds of mineral water and dealers in all kinds of liquors. This advertisement is the first and only time I’ve seen the name “Nassau Bottling Company” associated with the business. 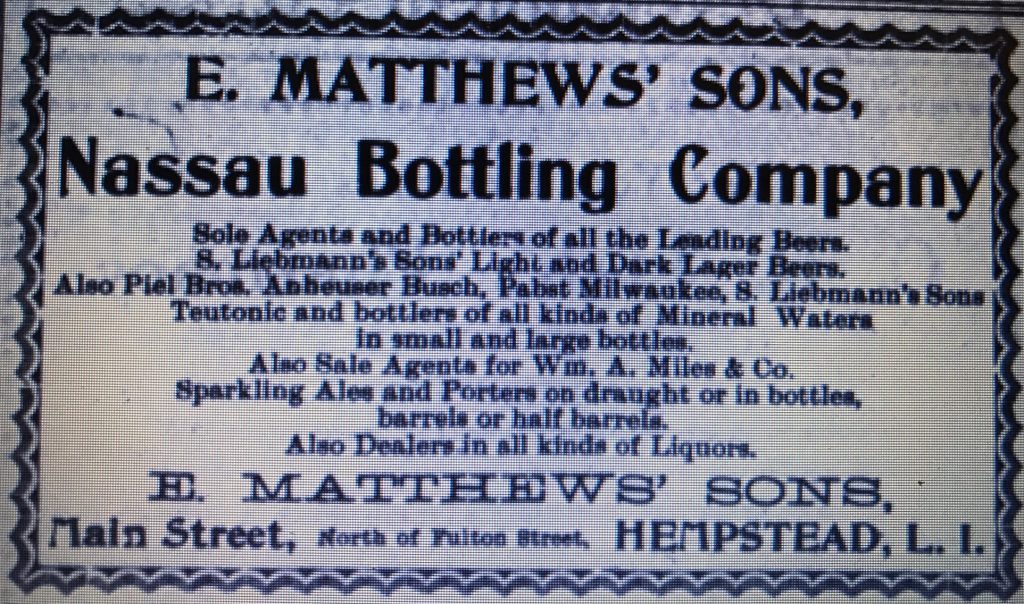 It’s not clear when the business ended, however in the 1910 census records neither son mentioned bottling as an occupation. In fact, both sons listed their occupation as “trucking.”

In the 1890 Lain’s Business Directory under Hempstead, E Matthews was listed under bottler, Main c. Centre and under hotel at 57 Main Street. The Hempstead Public Library has several historic photographs of the hotel, some after the blizzard of 1888. It was a three-story wood frame building not much bigger than a house with a canopy extending out over the sidewalk. According to the 1903 History of Long Island, “the object of the hotel was to maintain a cozy, home-like hostelery for the accommodation of the traveling public and for those who seek quiet and pleasant surroundings”. 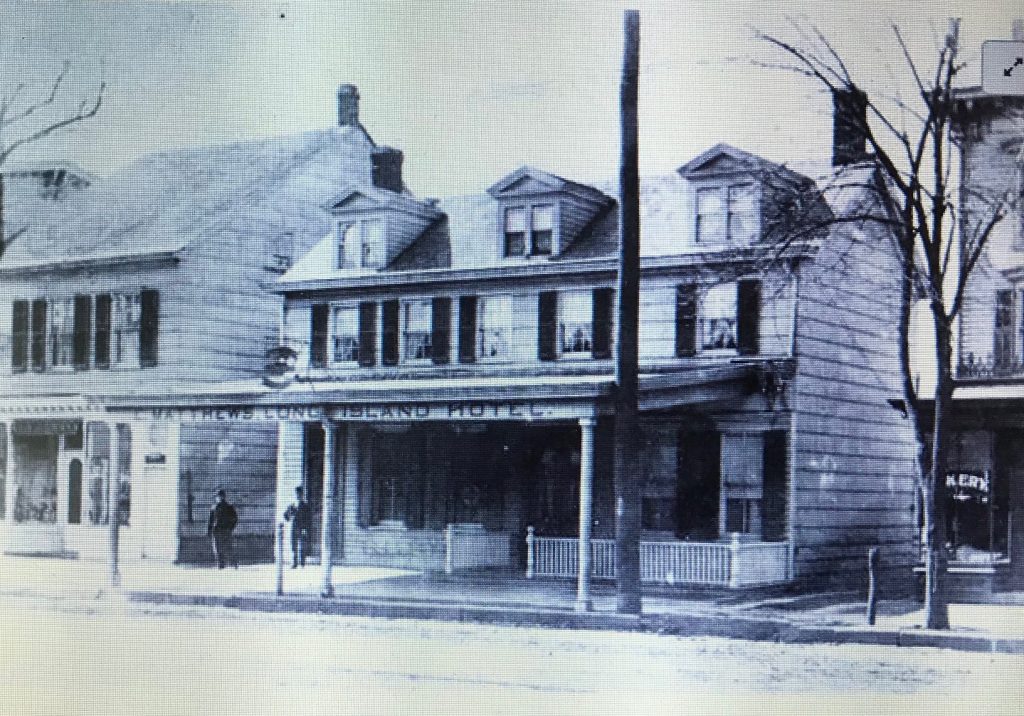 Matthews may not have been the totally upstanding citizen that the Long Island History piece suggests. A June 14, 1889 article in the Brooklyn Daily Eagle stated:

The case of the people against Elbert Matthews of Rockville Centre, charged with selling liquor on Sundays, was tried for a third time yesterday before Justice DeMott, the jury for the third time disagreeing.

A total of five bottles have been found, all different styles:

The first three date to before the sons took over the business so they’re pre-1898. The first two are probably early 1890’s. The third was found together with the fourth so they probably date to right around the take over date; say 1897 (E Matthews)-1900 (E Matthews Sons). The fifth is a crown top and dates to the early 1900’s.