The initial proprietors of the business were John Bolen and John Byrne. The “History” section of corporate documents, prepared in 1929, stated that the original partnership of Bolen & Byrne was established in 1857 and that they were the first manufacturers of ginger ale in America.

The first listing I can find for the business is 10 years later, in the 1867-68 NYC Directory, listed as soda and located at 235 East 28th Street. Census records show that John Bolen was born in 1840 and would have only been 17 years old in 1857 so while it’s possible that he established the business at this young age, I’m leaning toward a start date closer to 1867 based on this initial listing.

The business remained at East 28th Street through 1877. Over this period they listed themselves in the directories as either chemists, soda or waters. This is confirmed by a company receipt from 1875 that was listed on e-bay.

The receipt listed their address as 220, 231 and 233 East 28th Street. It also names them as the proprietors of the American Mineral Water Co., located on President Street in Brooklyn. I can’t find any mention of the American Mineral Water Co., or Bolen & Byrne in the late 1870’s Brooklyn Directories. It’s possible that this may have been their factory location but who knows?

Around 1879 Bolen & Byrne moved from East 28th Street to 415 East 54th Street where they remained listed through 1902. Both Bolen and Byrne were also listed individually at this location until 1893, when Byrne’s listing disappeared. Most likely, he either passed away or left the business around this time.

During this time the business also maintained a Philadelphia location. They were listed in the Philadelphia City Directories between 1888 and 1896 as bottlers located at 813 North 11th Street.

A brief description of the size of the business around this time was provided by John Bolen himself, as part of a statement he made to the Senate Committee of Finance in 1888 regarding tariffs:

My concern, Bolen & Byrne, is the most extensive in this country. We have over 200 hands employed in our two establishments in New York and Philadelphia.

It looks like the business formed a New York Corporation in the late 1800’s. In 1898, the business was listed for the first time as Bolen & Byrne Mfg. Co. (NY).  John Bolen was listed as President and his son, John K. Bolen as secretary up until 1902. After this it appears that both father and son disassociated themselves from the company.

In 1904, Bolen & Byrne moved to 514 West 36th Street with Abraham Karlsson named as president. The carbonated beverage firm of S.A.Ludin operating under the registered trade name of New York Bottling Co. was also listed at that address and it appears that they merged or at least formed an association with Bolen & Byrne. Although listed separately in the NYC directories, they advertised together quite a bit. The advertisement below is from the December, 1907 issue of the Druggist Circular. 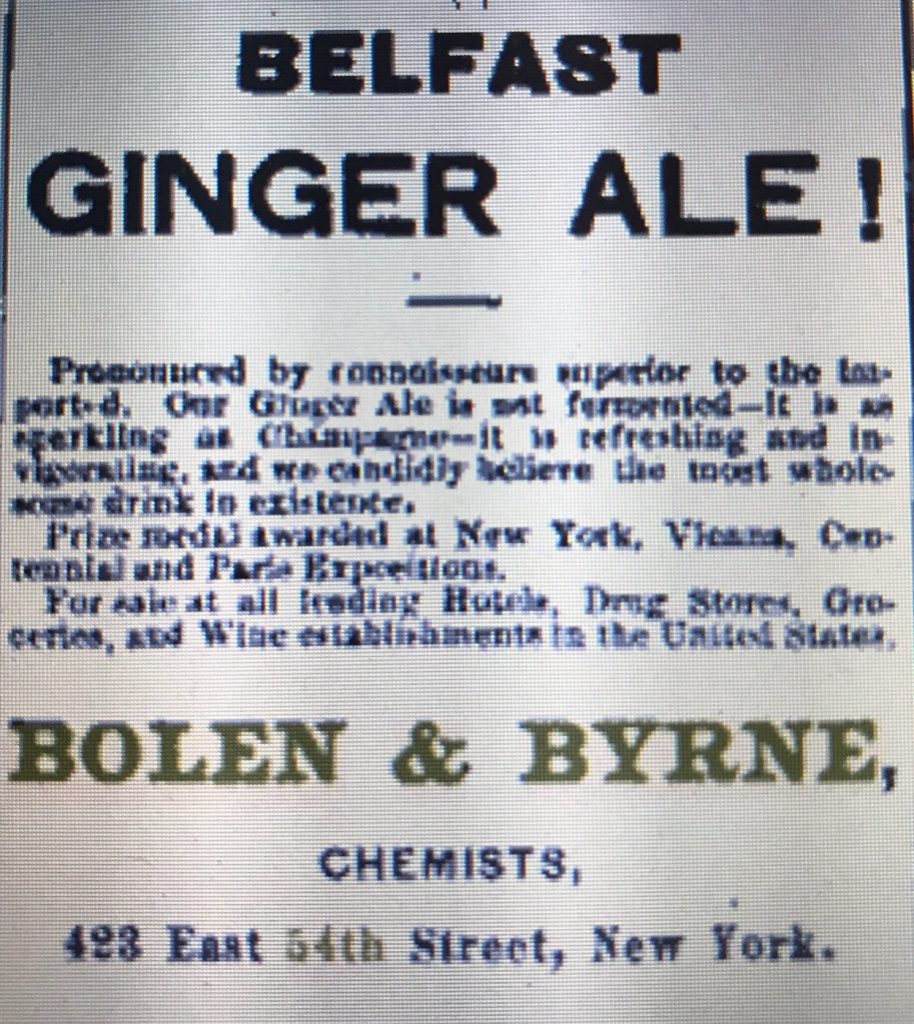 Pronounced by connoisseurs superior to the imported. Our Ginger Ale is not fermented – it is as sparkling as champagne – It is refreshing and invigorating, and we candidly believe the most wholesome drink in existence.

For sale at all leading Hotels, Drug Stores, Groceries and Wine establishments in the United States.

Around this time, Bolen & Byrne’s competition in the ginger ale market came from a firm called Cantrell and Cochran who had places of business in both Dublin and Belfast, Ireland. They did business in Great Britan and Ireland, as well as throughout the United States. In the late 1870’s and early 1880’s they brought suit against Bolen & Byrne on the grounds of infringement of their trademarks. According to an article in the 1882 issue of Bonfort’s Wine and Spirit Circular:

This infringement was not confined to a mere timid attempt or colorable imitation of Messrs. Cantrell & Cochrane’s packaging, but was as close and elaborate copy of the original bottles, labels, corks, etc., as could be executed.

Bolen and Byrne went so far as to have the words Dublin and Belfast stamped or blown on the rounded bottoms of their bottles, regardless of the fact that they had no facilities whatsoever overseas.

The court ruled in Cantrell & Cochran’s favor stating in part that Bolen & Byrne’s packaging was:

A decade later, Bolen & Byrne found itself on the other side of the fence and brought suit against Rudolph Jonasch and others for adopting a trade mark so similar to their’s that it would be likely to deceive consumers. According to court records:

In this instance, Bolen and Byrne prevailed.

On January 14, 1929, a corporation called the Bolen & Byrne Beverage Corporation, incorporated under Delaware laws, was registered with New York State as a foreign business corporation. Documents associated with their stock offering published in the January 29, 1929 issue of the Brooklyn Daily Eagle stated that the new corporation was a successor to the original partnership of Bolen & Byrne, established in 1857. It went on to say that its president, Ehler Meyer, was a descendant of the founders (but they don’t say which one). The document also stated that the corporation will own all the stock of both the Orange Crush Bottling Company of New York and the Piping Rock Corporation of New Jersey.

Other than reviving the name “Bolen & Byrne” I don’t see much of a connection between this corporation and the original business.

As best I can tell, today, the Bolen & Byrne Beverage Corporation is still an active corporation registered with the NYS Department of State. However, their last listed address of 502-04 West 45th Street is currently a Hess Gas Station. So who knows?.

The bottle I found is mouth blown with an applied lip. It has a rounded bottom and is embossed Bolen & Byrne, New York. There’s no mention of Dublin and Belfast. It was probably manufactured in the 1880’s, after they moved to East 54th Street. 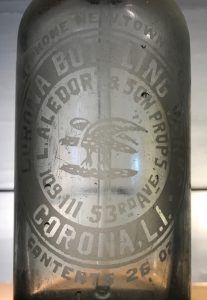 The first listing I can find for the Corona Bottling Works is in the Brooklyn and Queens Section of the 1924 NYC Telephone Book. There’s no address listed but the phone number – Newtown 2399  matched the one on the bottle. In the October 1925 edition of the phone book they changed their phone number from the Newtown Exchange to a Havmeyer exchange.

In 1927 and 1928 they listed 103-13 53rd Ave as an address. This isn’t the same location etched on the bottle but it makes sense that they moved at the same time they changed phone numbers.

During this period, Louis Aledort and the business of L Aledort & Co. are also listed and both always share the same phone number with Corona Bottling Works so they are probably one and the same business. The listing for L Aledort & Co goes back to the 1917 edition of the phone book so it appears the business started around this time. I can’t find enough information to determine the end date of the business.

The bottle I found is an etched 26 oz siphon bottle. It probably dates to the early 1920’s when they started using the Corona Bottling Works name but no earlier than 1917 when the business started. The bottle names the proprietors as Louis Aledort & Son.

In response to the original post I was contacted by the great great grandson of Louis Aledort. He informed me that the business was ultimately passed down to his great grandfather (Louis Aledort’s son) Harry Aledort. Below is a photograph of the bottle used when Harry ran the business together with the bottle I found in the bays. 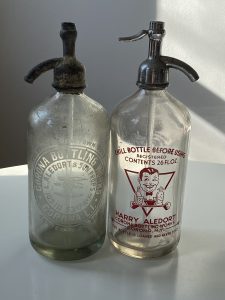 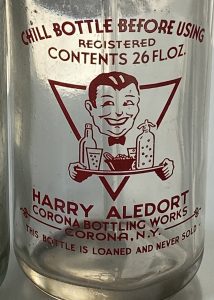 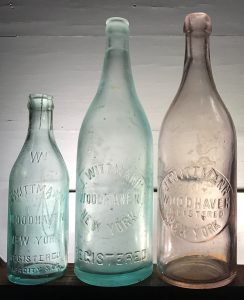 The J stands for Joseph Wittmann.

Joseph Wittmann, Queens Ward 4, appears in census records from 1900 to 1930. Over that period, he listed himself as a bottler, proprietor, manufacturer and retail merchant of mineral/soda water. According to a September 28, 1940 Brooklyn Daily Eagle article announcing his death, Wittmann was born in Brooklyn and lived in Queens for 46 years. He died in 1940 at the age of 76.

The business apparently started in Brooklyn in the late 1880’s. Joseph Wittmann, bottler, was listed in the Brooklyn directories between 1889 and 1891 with an address of 729 Flushing Avenue. He was not listed in the 1887 Directory.

Sometime between 1892 and 1898, the business moved to Thrall Pl, corner of Broadway, Woodhaven, where it’s listed in the 1899, 1903,1907, 1908-1909 and 1912 Trow Business Directories of the Borough of Queens under mineral water. It was also listed in the Brooklyn, Queens and Staten Island Section of the New York Telephone Directory as Carbonated Beverages through at least 1928. By this time, the address was 97-40 91st but I don’t think the location changed because Thrall Place was renamed 91st Street. Based on the census records the business could have lasted into the 1930’s.

I’ve also observed machine made (28oz) bottles in the bays as well.