Peter Alart was listed individually within the NYC Directories beginning in 1872/1873 as pickles at 58 Harrison Street. After that, from 1873 to 1881 the firm of Alart & Rossitor was listed as pickles first at 58 Harrison Street, then 99 North Moore Street and finally at 402 Greenwich Street. Then in 1882 the name of the business changed and Alart & McGuire was listed for the first time at the 402 Greenwich Street address. In 1888 the business moved to their long time address at 68-70 Madison Street. An 1888 advertisement on the New Jersey Trade Review also referred to Alart & McGuire as the Westchester Pickle Works and also mentions the “OK” trademark.

The business was highlighted in the 1888 edition of “Illustrated New York, The Metropolis of Today” giving the following snapshot description of the business at that time:

The largest and most important enterprise of its kind in New York is the Westchester Pickle Works conducted under the enterprising proprietorship of Messrs. Alart & Mcguire at No.s 68 and 70 Madison Street. The firm enjoys a national reputation as extensive manufacturers of, and wholesale dealers in, pickles, vinegar and catsup and they have been established in the business here since 1868. They operate large and finely equipped factories and pickle houses in New York, Sing Sing and Dobbs Ferry and are also widely known as importers and bottlers of sauerkraut, pickles, onions and cauliflowers for the trade.

The building occupied by them on Madison Street is four stories high, 50 x 125 feet in dimension and equipped with a full complement of machinery and appliances for the business operated by steam power while everything tending to facilitate and perfect production is added as soon as it appears. One hundred skilled and expert hands are constantly employed and every modern facility is at hand to insure the prompt and satisfactory fulfillment of orders.

According to this story, it’s clear that their Madison Street location included both an office and factory in 1888. By 1909, this March 7 advertisement in the  New York Sun demonstrated that they were operating at least one additional facility, an olive department, in Manhattan, located at 299 to 305 Water Street. 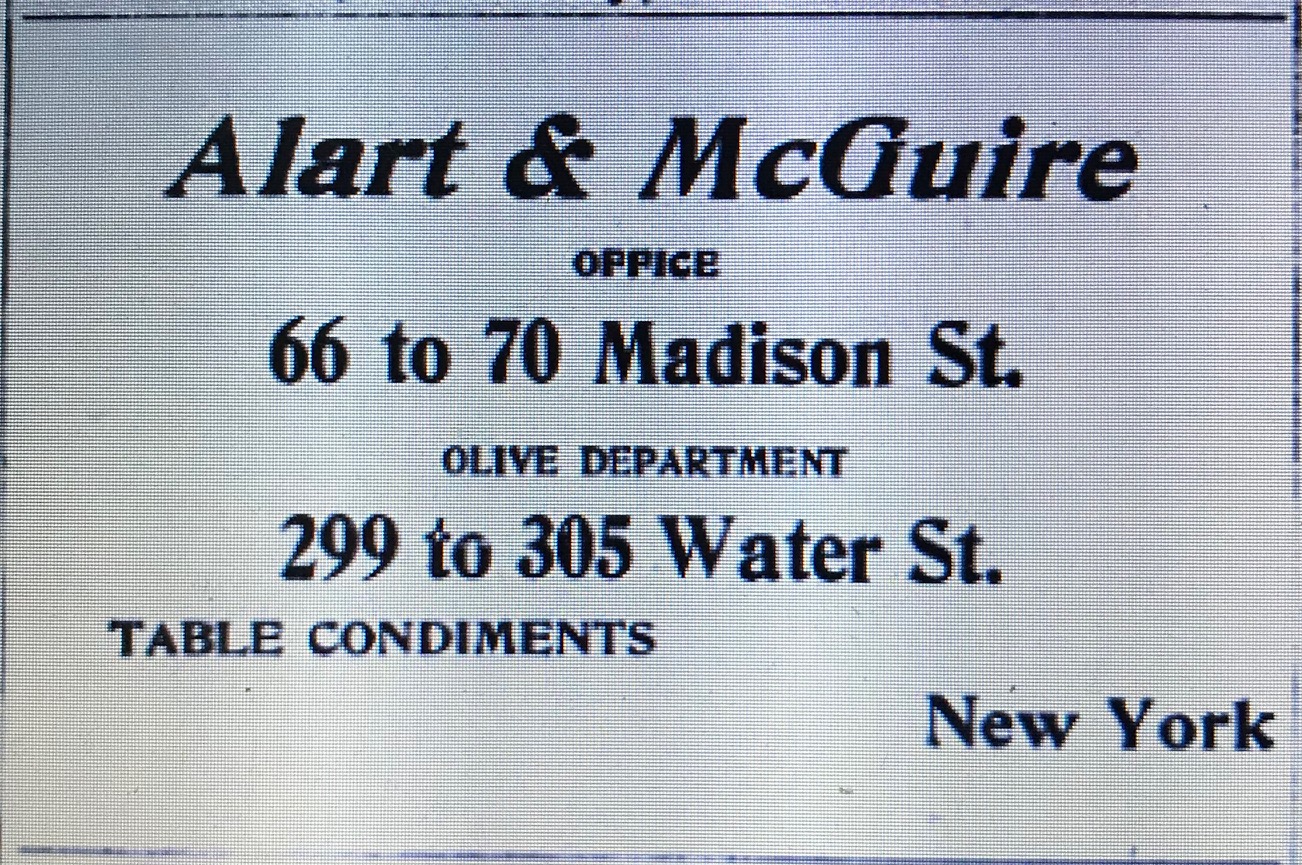 Around the mid-teens it appears that they moved their main factory to Brooklyn. The 1914 and 1915 Brooklyn telephone books listed Alart & McGuire on Imlay Street in Brooklyn. This May 25, 1913 advertisement in the New York Tribune indicated that they were up and running in Brooklyn by that time.

The 1914 and 1915 listings also included their office which was still listed on Madison Street in Manhattan. Sometime between 1915 and 1918 their office moved from Madison Street to Vesey Street, also in Manhattan. The 1918-1919 NYC Copartnership and Corporation Directory listed them as a New York corporation located at 68 Vesey Street with T Burt McGuire (son?) as president. The company business was listed in the directory as “table condiments.”

By the turn of the century, the company was also very active on Long Island. A significant portion of the cucumber crop needed for pickling came from the the Island’s north shore, so to reduce shipping costs Alart & McGuire began building and operating pickling facilities there. One of the first, completed in 1890 was in Hicksville/Syosset near the LIRR train station for easy access to shipping. Another in Mattituck was built in 1889.

Another, this one located in Riverhead, Long Island was described in a September 1, 1900 story in the Brooklyn Daily Eagle. As you read the story, the company’s importance in the local economy becomes quite obvious.

Riverhead, L.I., September 1 – Thousands of cucumber pickles are being received at the Alert & McGuire pickle house in this village. During the past few days the pickles have been coming in at the rate of about 200,000 per day. So far this season over 1,500,000 cucumbers have been placed in the immense vats, and it is expected that before the season is over the number will reach about 3,500,000.

The pickle house managers pay the farmers $1.25 per thousand for all they can bring them. Thus it will be seen that the farmer who grows pickles along with his other crops has still a chance to get out of the season’s work a pretty good stipend, although his potatoes are partly a failure. About $5,000 will be paid the farmers in this vicinity for cucumber pickles this year.

The story went on to describe the process for making pickles.

The Alart & McGuire pickle house here is one of the largest in the state. It is managed this season by William A Wightman, who showed an Eagle man how to make pickles in short order yesterday. As fast as the cucumbers are dragged to the house in big wagons they are immediately dumped into an immense vat extending several feet below the flooring, and holding in the neighborhood of a  half million pickles. From time to time a number of shovels full of fine salt is thrown into the vat. When the vat is full to the top with cucumbers, nearly all of which, by the way, are five inches in length, a quantity of water is turned into the vat, making a thick heavy brine. Boards are placed on top, and heavy weights rolled on to keep the cucumbers under the brine.

With such strong brine the pickles are ready to be taken from the vat in three weeks. They are then sorted and packed in barrels ready for shipment.

Arnold Bros. Pickle and Preserve Company purchased the business in 1925. I lose track of them in the New York directories around that time.

The September 1922 edition of the Grocery Review printed an item under the heading “Chicago Notes” stating that Arnold Bros. had just incorporated.

A second item in the same edition of “Grocery Review” stated that they had just moved into a new factory.

Based on this it’s quite possible that the Alart & McGuire business was folded into the Chicago operation.

Ultimately they were rolled into Bay Valley Foods, a division of Treehouse Foods Inc.; the largest pickle supplier in the U.S.

The building at the 68-70 Madison Street location no longer exists. It is now a large set back apartment building.

The bottle I found is a small mouth blown bottle with the “Alart & McGuire Pickles” and “OK Trade Mark” embossed on the base.