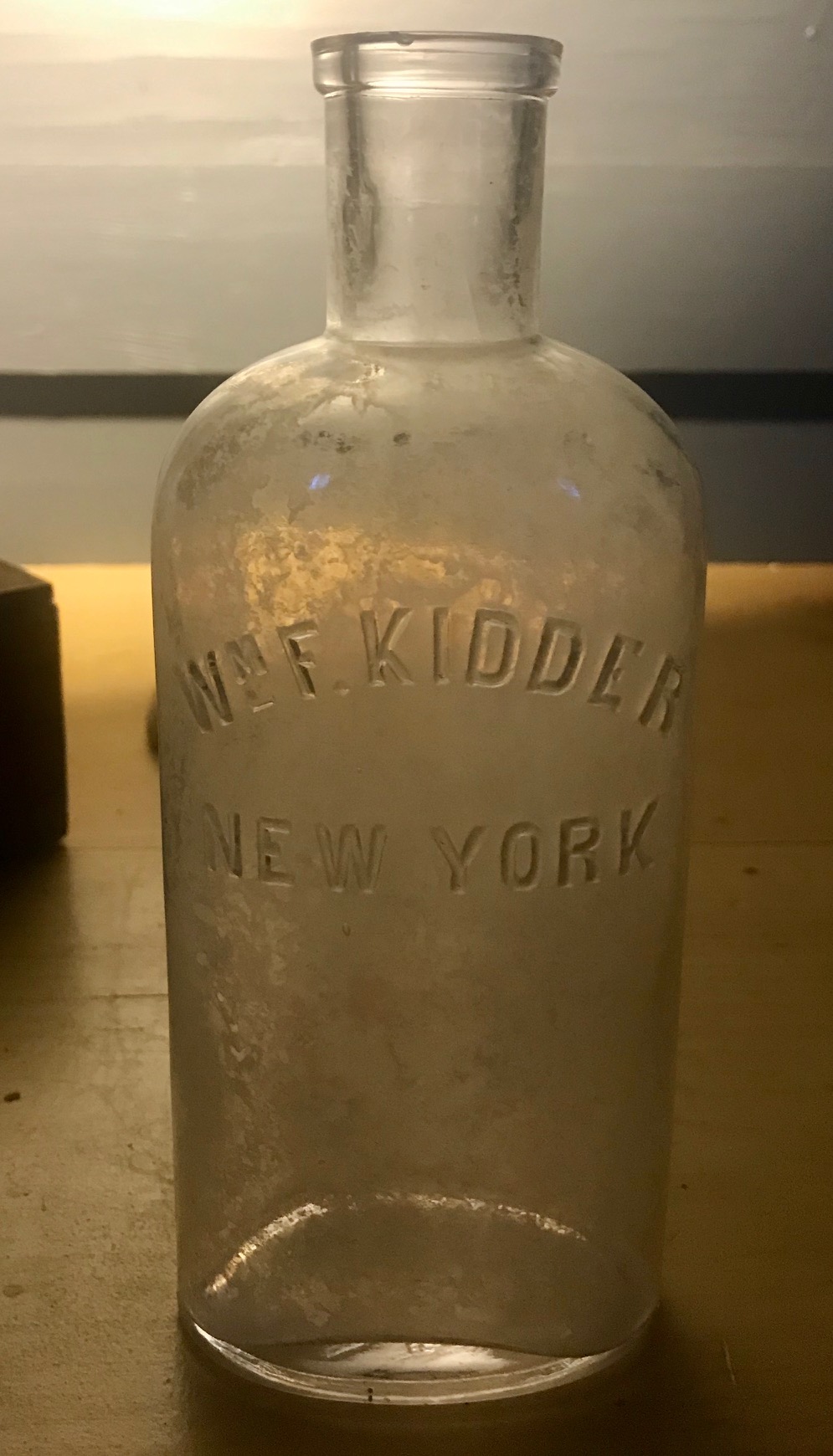 William Kidder was a wholesale drug merchant and later manufacturing chemist located in New York City’s Borough of Manhattan. Companies associated with his name were in business from the late 1860’s up through the early 1900’s.

Initially Kidder ran a wholesale drug depot in partnership with Eugene Wetherell. Although not listed in New York City directories prior to 1870, November and December 1869 advertisements for Durno’s Catarrh Snuff made it clear that they were certainly in operation by then at 32 Cedar Street under the name Kidder & Wetherell. 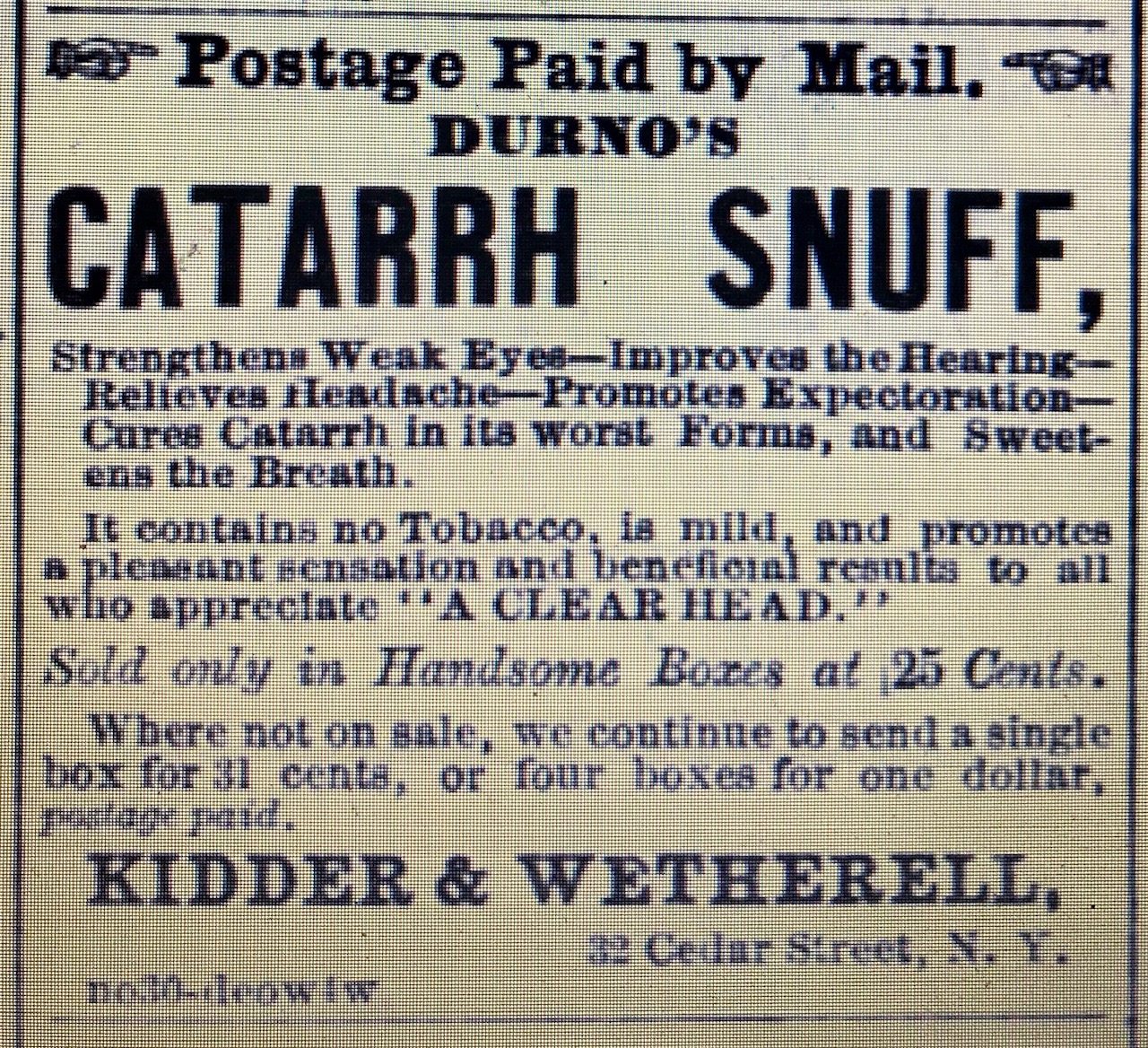 The partnership with Wetherell continued for several years using several different addresses; 104 William Street (1870-1871), 57 John Street (1872) and 83 John Street (1873). Directories during this period classified them under several categories including merchants, importers and soaps.

Then in 1874 the NYC Copartnership and Corporation Directory listed the partnership as dissolved. A pair of advertisements published in New York’s Christian Leader suggest that the dissolution took place sometime in November of 1873. The first, for Morison’s Pills published on November 8, 1873, named the business as Kidder, Wetherell & Co. The second, for Buchan’s Carbolic Soaps published a week later on November 15, 1873 in the same newspaper, named the business as William F. Kidder & Co., successors to Kidder, Wetherall & Co. 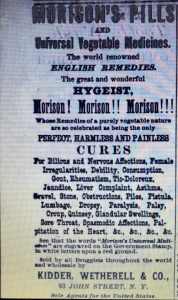 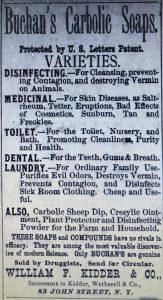 Between 1874 and 1877 Kidder remained in business at 83 John Street operating under the name Wm. F. Kidder & Co. Newspaper  advertisements during this time indicate that the company continued to operate primarily as wholesale agents for a wide variety of products that not only included patent medicines but also items like Hawthorne Spring Water and Frese’s American Mende Cement. 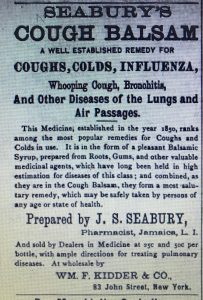 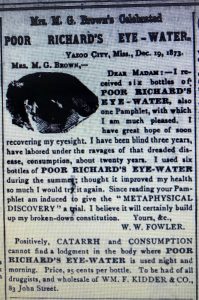 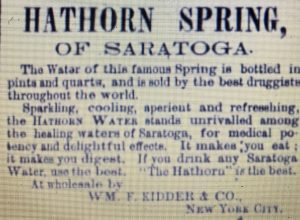 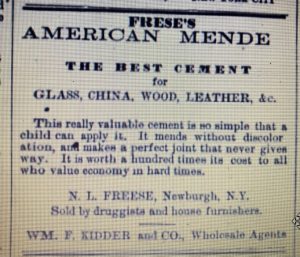 Sometime in 1877 or 1878, Kidder formed another partnership, this time with George W. Laird. The business operated under the name Kidder & Laird from 1877 up until 1884. Sometime around 1880 advertisements for Kidder’s Saccharated Pepsine began appearing in the trade magazines suggesting that by then, in addition to acting as wholesale agents, they had added a manufacturing arm to the company. 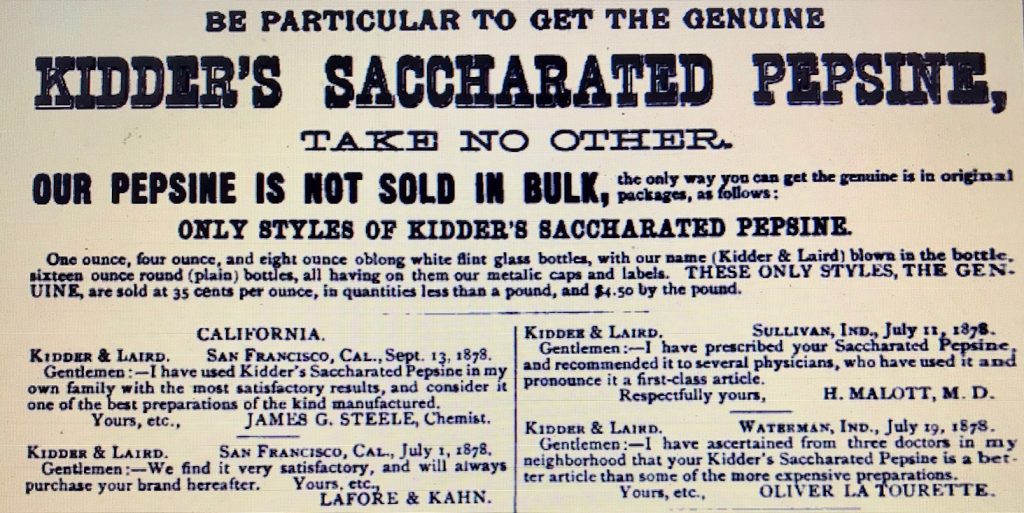 Ultimately, with Laird experiencing financial difficulties, the  Kidder & Laird partnership was dissolved on May 3, 1884. The dissolution notice appeared in the May, 4, 1884 edition of the New York Tribune.

At this point, Kidder, now associated with a man named Vass Houghton, carried on the business as Wm F. Kidder & Co. and by the mid 1880’s was heavily advertising several specialty products. One called “Digestylin,” was labeled as “a sure cure for indigestion and dyspepsia” in a series of newspaper advertisements that ran throughout the eastern half of the country in September through December of 1887. 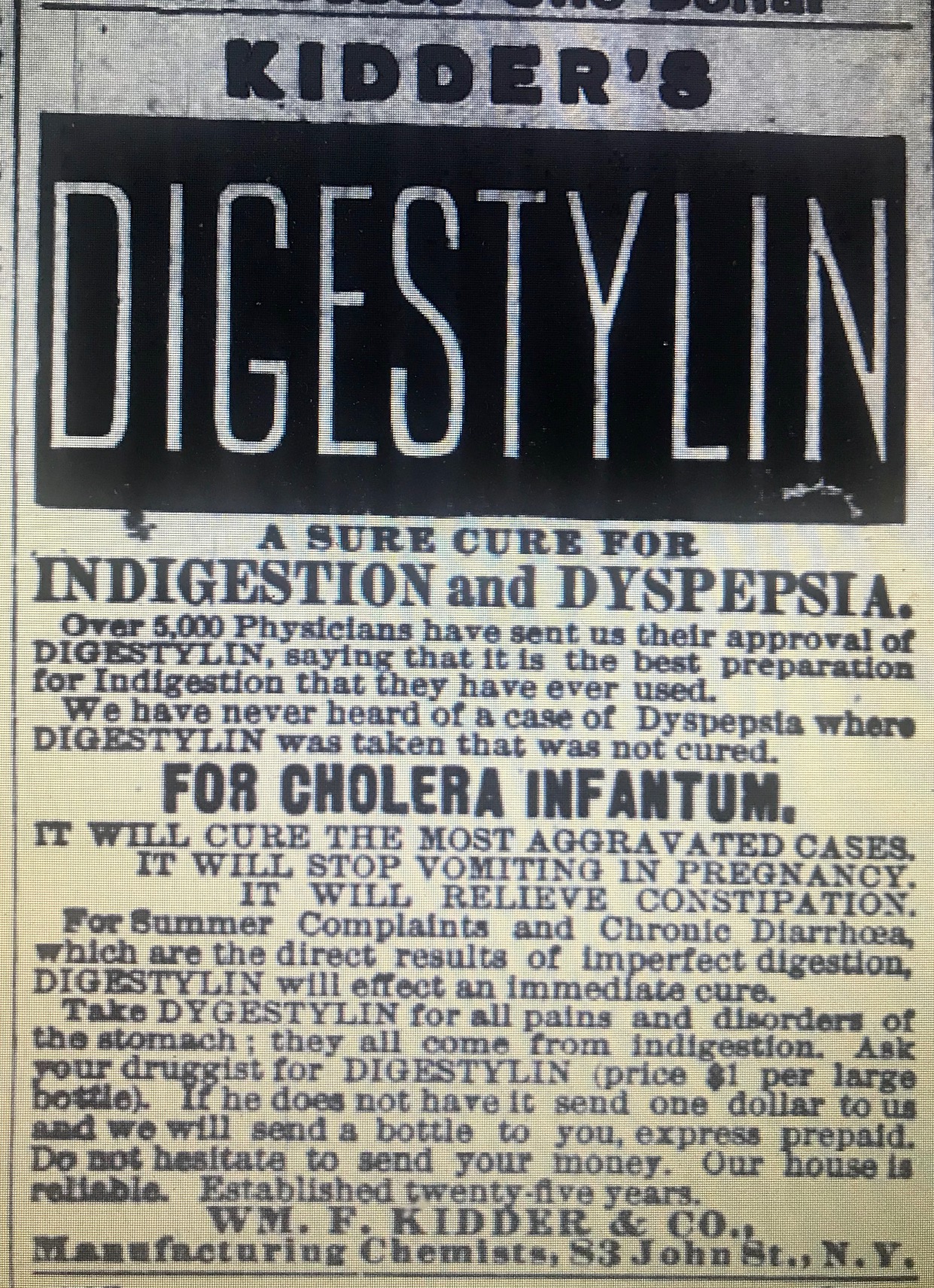 Another was Kidder’s Wine of the Purified Hypophosphites of Lime and Soda that was primarily advertised to the medical profession in pharmaceutical trade magazines.

Physicians will find this wine an efficacious remedy, where disease indicates the administration. Of all preparations of Phosphorous the Hypophosphates are the most easy assimilated thus rendering it a superior medicine in an improved condition of the system, as in Phthisis, Nervous Depression, Scrofulous Ulceration, Debility from prolonged lactation, and in all diseases in which the vital forces are impaired. The combination with pure wine aids its tonic action and makes it palatable and acceptable to the most delicate stomach. This preparation, alternated with Hydroleine (Hydrated Oil), will greatly aid in building up the debilitated system.

The  mention of Hydoleine in the above advertisement was no coincidence because Kidder was also the sole U. S. agent for that product as well. 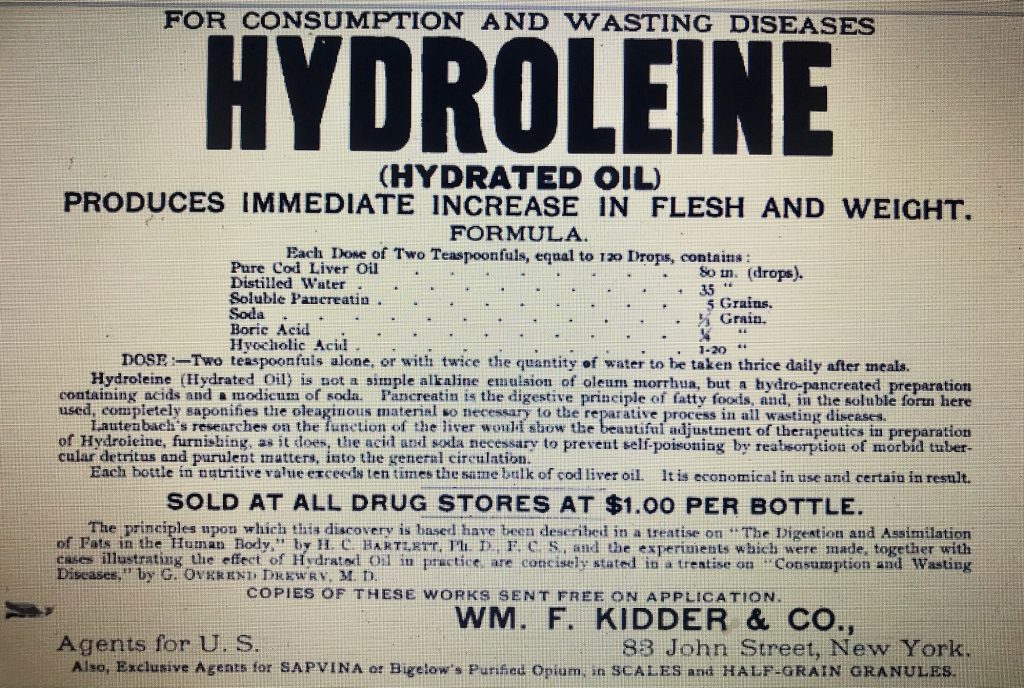 According to a January 14, 1888 story in The New York Times, it was the advertising costs associated with these products that, in part, forced a suspension of the business at that time.

William F. Kidder and Vass Houghton, comprising the firm of William F. Kidder & Co., 83 John St., New York made an assignment recently to Benjamin Y. Pippey. The failure caused great surprise in the trade, as a year ago $150,000 had been claimed as available means. Mr. Kidder who lives at East Orange, did not come over to his office yesterday, and his clerks could not give any details of the failure. It was stated, however, that Mr. Kidder had spent large amounts in advertising his specialties and the returns had come in very slowly lately. Business had been dull and obligations were maturing which he could not meet. The failure of his former partner, George W. Laird, some time ago, had also affected him indirectly, as he had added one of Mr. Laird’s creditors to a considerable extent. Mr. Kidder had hoped to pull through, but found he was unable to.

Several weeks later a slightly more optimistic item appeared in the March 1888 edition of the Druggist Circular and Chemical Gazette.

The assignee of Wm. F. Kidder & Co., reports the nominal assets at $38,000, actual assets $21,000 and gross liabilities $62,000. There is an effort being made to effect a settlement with the creditors that business may be resumed.

It appears that Kidder did in fact continue in business, remaining with the company for several more years. Both the company and Kidder were still listed at 83 John Street with the the classification “patent medicines” in the 1890/1891 NYC Directory. However, the next year the company moved to 19 Beekman Street and by that time Kidder was no longer included at that address.

The 1895 NYC Copartnership and Corporation Directory listed Wm F. Kidder & Co. as a New Jersey Corporation with capital of $12,000 (I don’t have access to 1891 to 1894). Still located at 19 Beekman Street, George Currier was named as president and Frank W. Bailey and Horace W. Campbell as secretary and treasurer respectively.

Sometime around 1900 the company moved to 26 Cliff Street where it was still listed with the same officers in the 1902 NYC Copartnership and Corporation Directory. It had vanished from the directories by 1904.

The bottle I found is a 12 oz mouth blown medicine embossed “Wm. F Kidder, New York.” That puts it within one of two time periods when the company operated solely under his name – 1874 to 1877 or 1884 to 1903. The bottle was almost certainly manufactured during the latter. I suspect it’s from the mid to late 1880’s when the company heavily advertising “Dygestylin” to the general public (price $1 per large bottle according to the above advertisement).