Albert D. Buschman was a German immigrant, who between the late 1880’s and early 1900’s was an influential business owner in Brooklyn, New York. His profile, included in a volume called “A History of Long Island from It’s Earliest Settlement to Modern Times,” published in 1902, called him a “shrewd, far-sighted business man who:

became convinced of the future development of Coney Island, and in 1890 invested largely in real estate, which property has made him one of the wealthiest men on the island.

His business activities, which included, mineral water manufacturer and bottler, brewery owner and hotel proprietor were cut short when according to his September 13, 1927 obituary in the (Brooklyn) Times Union:

In 1903 he suffered a paralytic stroke. Although unable to walk, his mental facilities remained unclouded, and he continued to conduct his business until he retired in 1908 and to advise his sons almost up to the time of his death. Bushman’s Walk, near Steeplechase, was named in his honor.

Buschman arrived in the United States in 1868, at the age of 10 and according to the History of Long Island between 1881 and 1886 he worked in partnership with Henry Sierichs. During this period, Sierichs was sometimes listed with the occupation of “waters” and other times “bottler” at two Manhattan addresses; 159 Elizabeth Street and 172 Orchard Street. Buschman was typically not listed during this period but did appear in the 1884 directory with the occupation of “bottler” at the Elizabeth Street location. So I suspect it was during this five year period with Sierichs that he got his start manufacturing and bottling mineral water.

In 1885 or 1886 Buschman and Sierichs dissolved their partnership and Buschman established his own business in Coney Island. Bushman’s obituary stated:

About 1885 he moved to a plant at Coney island. Four years later he bought out a large bottling factory.

I can’t find a directory listing for his initial Coney Island operation but the embossing on the back of the bottle I found, “Mineral Water,” and the date “1888,”makes it clear that the business was up and running in Coney Island by that time. 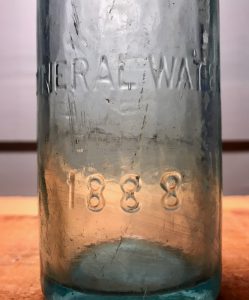 In 1890, the Lain’s Brooklyn and Long Island Business Directory included a Coney Island section that listed A. D. Buschman & Co. at what was presumably their newly purchased bottling factory, located on Surf Avenue (corner of Stillman Avenue). Apparently a partnership, the listing named Albert Buschman, along with Charles Buschman (likely Albert’s brother) and Frederick Von Wiegen as proprietors.

The 1892 edition of Lain’s included an advertisement that mentioned in addition to manufacturing and bottling mineral water, they were also bottling both local and out-of state beers. 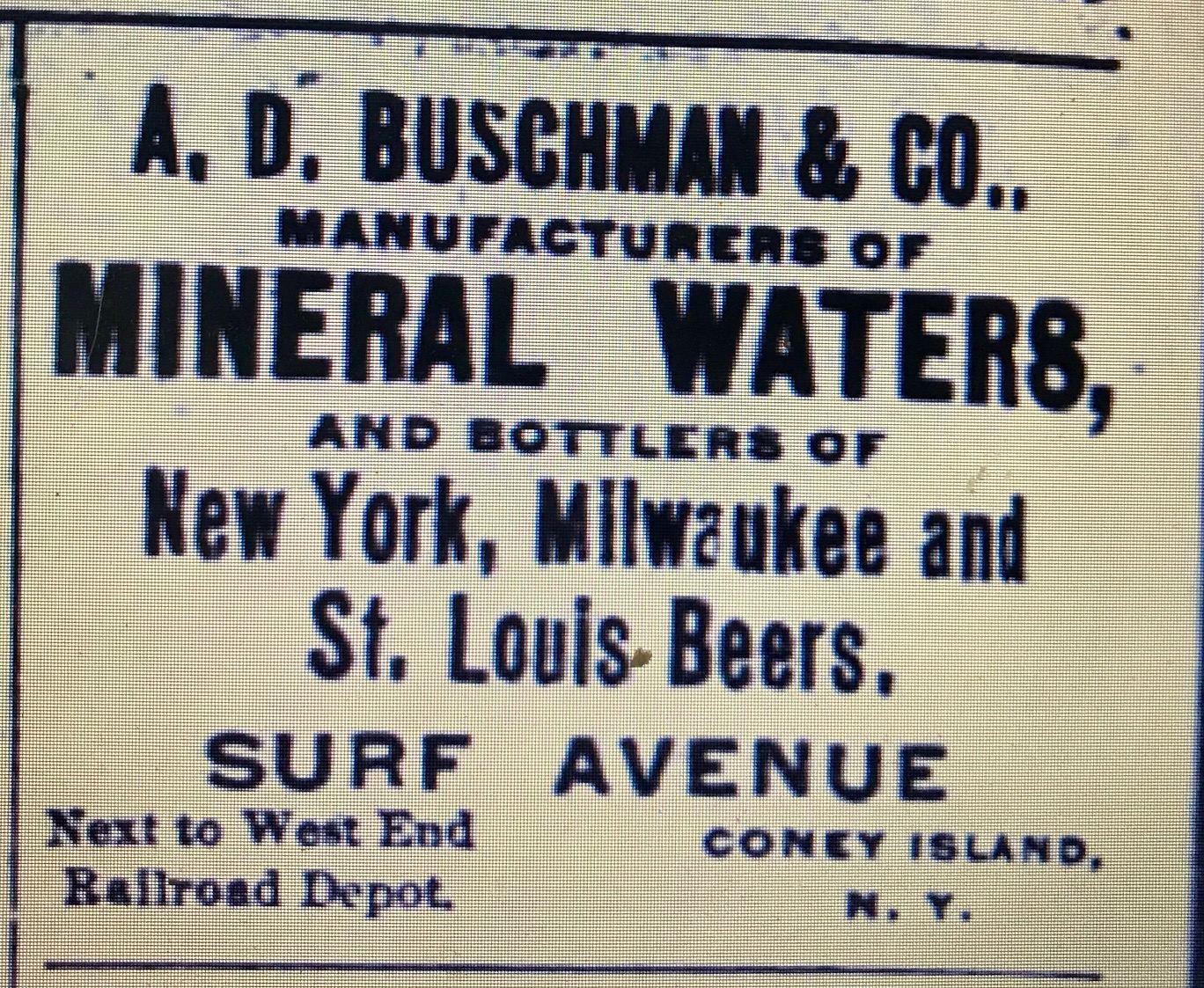 A series of 1897 advertisements in a German magazine called “Puck,” identified one of their local clients as a Manhattan brewery called Schmitt & Schwanenfluegel for whom they served as the local Coney Island bottler. 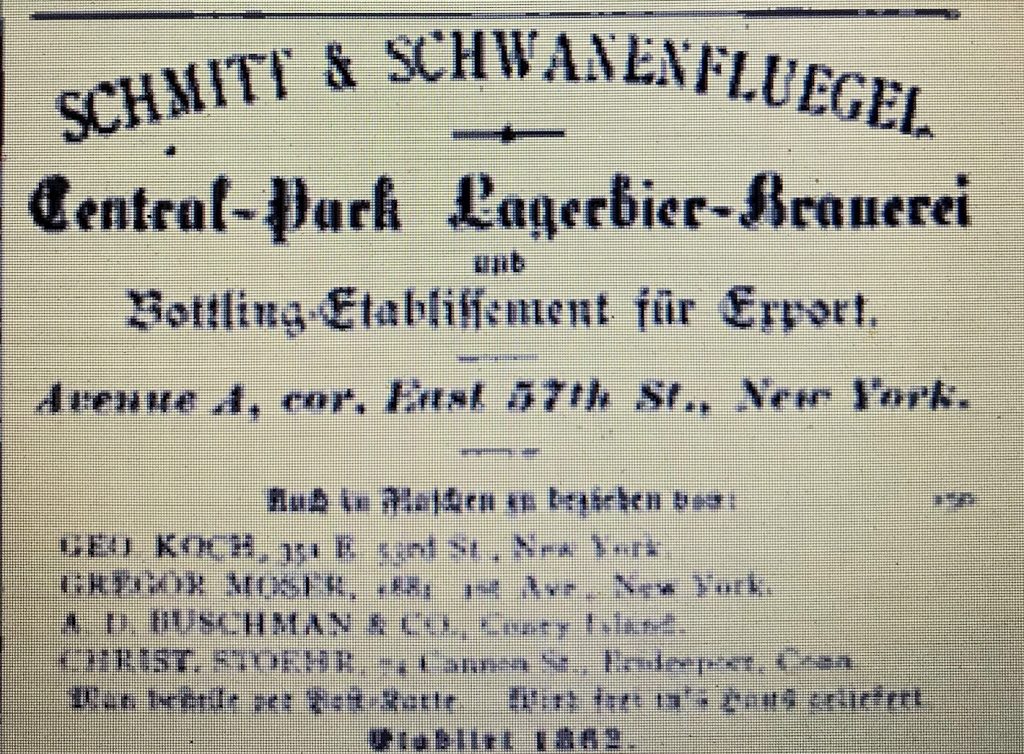 Frederick Von Wiegen passed away sometime in the late 1890’s so by 1903, with Albert incapacitated, it appears that Charles was running the operation. Around that time, Frederick’s wife, Frieda, put the Von Wiegen share of the business up for sale. The announcement printed in the March 21, 1903 edition of the New York Times under the heading “Business Opportunities” provided a concise description of the company at the time, specifically mentioning that in addition to bottling mineral water and beer, they were also “wholesale dealers in wines, liquors and cigars.”

Around that time (actually 1888), a Report of the New York State Factory Inspector indicated that A. D. Buschman & Co. had 28 employees.

As far as I can tell, Frieda Von Wiegen never sold her share of the business. Charles Buschman was listed with the company until 1908 at which time it appears that Frieda’s son, also named Frederick W. Von Wiegen assumed control of the company. This August 28, 1908 advertisement in the Brooklyn Standard Union named him and Chas. W. Fehleisen as proprietors of the company, now called F. W. Von Wiegen & Co. 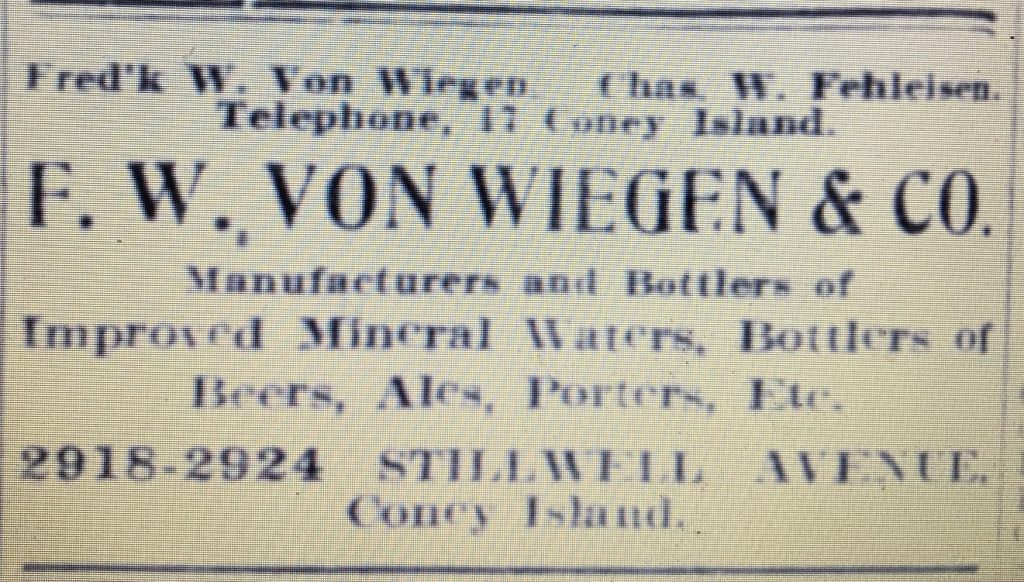 The business continued under that name for several years, but by 1913/1914 the Copartnership and Corporation Directory for Brooklyn and Queens indicated that the business had dissolved.

The bottle I found is mouth blown with an applied blob finish. In my mind the embossed date of 1888 on the bottle could mean one of two things. It could be the actual manufacture date of the bottle or, more likely, it could be the year Buschman established his large factory on Surf Avenue. This would put the manufacture date between 1888 and the 1908 name change to F. W. Von Wiegen & Co.

In addition to his mineral water business, for a time Buschman served as president of a corporation that owned the Apfel Klueg Golden Rod Brewery in Fort Hamilton, Brooklyn. It’s not clear exactly when Buschman acquired the brewery but newspaper articles in 1901 indicate that he was certainly the owner by then. A story in the May 25, 1927 edition of a Brooklyn publication called “Home Talk and Item Historical and Real Estate Review” mentioned that the brewery was demolished in 1907, which was about the time of Buschman’s retirement.

Although the story generally addresses a time period prior to Buschman’s involvement with the brewery, it provides an interesting description of the brewery and its place in history so I’ve included it here.

A favorite gathering place for South Brooklyn people 30 years ago, was the Golden Horn Brewery on Third Avenue, between Ninety-fifth and Ninety-sixth Sts., owned and conducted by Adolph Texter. It was there that many banquets and other social events were held and where nightly one could enjoy excellent band concerts given by musicians from both the Hamburg-American and North German Lloyd steamers in port and prominent vaudeville and concert artists.

It was at the Golden Horn Brewery that first experiments with a motion picture machine were made. An inventor, named Thomas Kelly, who has many patents on motion picture machines and who has an office on Fourteenth Street, New York, set up his new discovery at that place in the summer of 1897. The event was widely advertised and the curious filled the large ballroom of the brewery. A large screen was spread across the stage and the experiment began. Of course, figures moved, but so rapidly and blurred that it was impossible to distinguish any object. And your eyes! Well, after looking for a few minutes, one was unable to see correctly for some time. However, Mr. Thomas Kelly kept improving on his invention, and in a few weeks after the first experiment, again had a motion picture machine that was considered marvelous in those days, for the objects were distinguishable and didn’t affect the eyes. The brewery was demolished in 1907.