In the 1870’s newspaper advertisements began appearing for a patent medicine called Dr. Clark Johnson’s Indian Blood Syrup. Like most patent medicines of the day their concoction was purported to provide a “speedy and PERMANENT CURE” for a wide range of ailments. 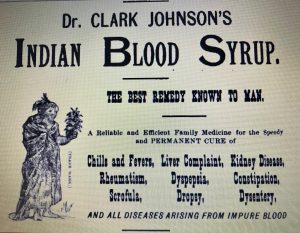 A series of advertisements appearing nation-wide in 1878 – 1879 told the following story which they’d have you believe accurately described the origins of this “Best Remedy Known to Man.”

Dr. Clark Johnson having associated himself with Mr. Edwin Eastman, an escaped captive, long a slave to Wakametkia, the medicine man of the Comanches, is now prepared to lend his aid in the introduction of the wonderful remedy of that tribe…

Suffice to say, that for several years, Mr. Eastman, while a captive, was compelled to gather the roots, gums, barks, herbs and berries of which Wakametkia’s medicine was made, and is still prepared to provide the same materials for the successful introduction of the medicine to the world; and assures the public that the remedy is the same now as when Wakametkia compelled him to make it. 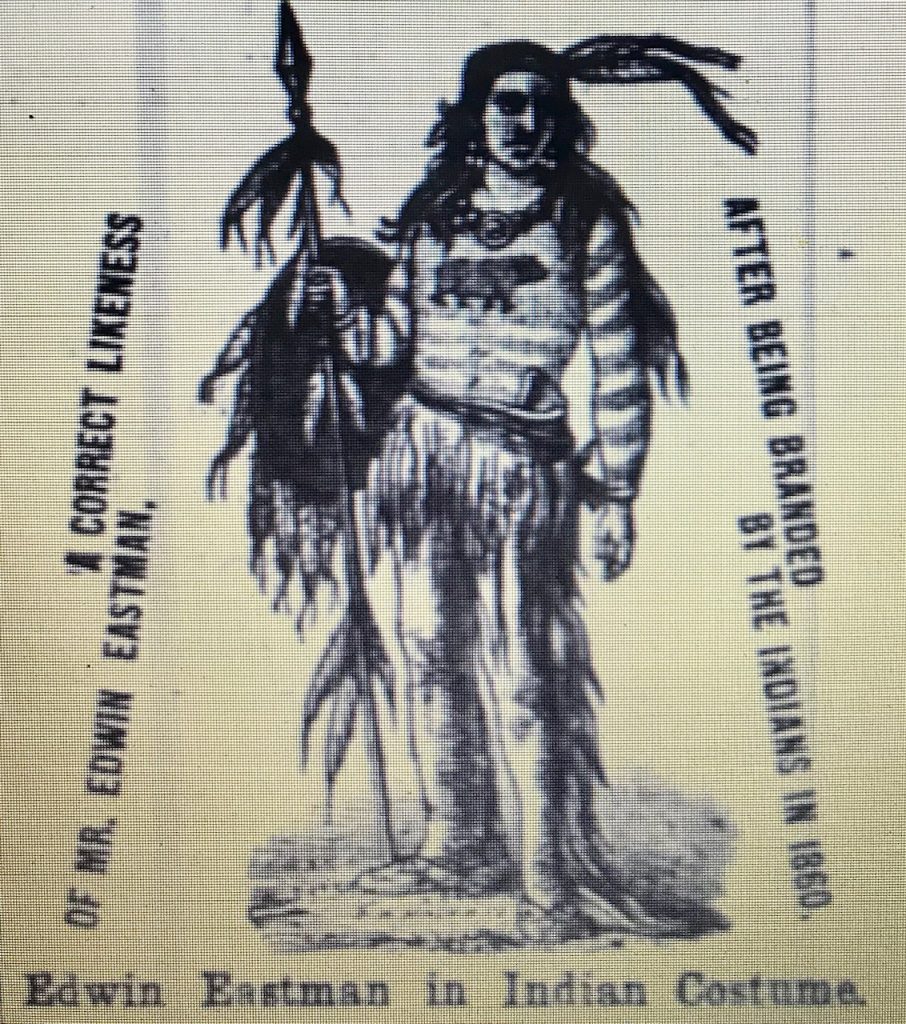 If that wasn’t convincing enough you could purchase the entire story entitled “Seven and Nine Years Among the Camanches and Apaches,” for $1.00. 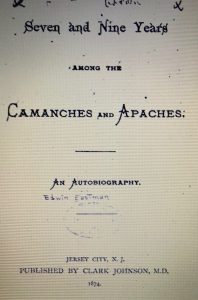 Their advertisements called it:

A neat volume of 300 pages, being a simple statement of the horrible facts connected with the sad massacre of a helpless family and the captivity, torture and ultimate escape of its two surviving members.

The title page of the story associated Dr. Clark Johnson, M. D. with Jersey City, N. J. at the time it was published in 1874. However, as you might have guessed, there’s no record of a Dr. Clark Johnson that I could find in either the Jersey City directories or the census records from around that time.

A monthly column entitled “Sundry Humbugs,”published in the December, 1873 edition of a publication called the “American Agriculturist,” told the real story, prominently featuring “Dr. Clark Johnson” as an example of blatant patent medicine fraud. The story revealed that the actual origins of the syrup and the business that manufactured it involved a man named Dr. E. P. Huylar who operated out of a building on the corner of Thompson Street and Amity Street (later renamed West 3rd St) in Manhattan. The story described Dr. Huyler’s medical qualifications, tongue in cheek, like this:

He followed a very peculiar course of study to acquire his title. He sold stoves and sewing machines, baked bread, took photographs, peddled tobacco, traveled with a fakir show, and finally became an M. D.

The story then went on to describe the operation.

Their “cure all” is or was a compound of aloes, cayenne pepper, molasses,  muriatic acid and other cheap and nauseous drugs. We would give the recipe as it was in full, but the above is all that is necessary to show what kind of stuff it is. They sell it under various names of “Mother Noble’s Healing Syrup;” “Wine of Apocynum,” supposed to be run from 236 and 238 Thompson Street, the side basement door of 77 Amity Street; “The Electric Health Restorer,” from the same number as the Apocynum; and “Dr. Clark’s Indian Blood Syrup.” This last is advertised from Jersey City. All letters which come to that address are taken from the post office by a messenger, carried to 77 Amity Street, New York City, and there attended to. The various enterprises are supposed to be run by Abel King, M.D., Dr. Clark Johnson, Edwin Eastman, Israel Goodspeed, and others. It is needless to say such persons never existed; they are purely creatures of imagination; only other names for this Doctor Huylar.

According to the “Statement of Facts” in a subsequent court case (Clark Johnson Medicine Company vs. Allen S. Olmsted ) the fictitious doctor’s name “may be traced to the fact Mrs. Huylar’s father’s name was Clark Johnson.”

The American Agriculturist story went on to say that the publication “Seven and Nine Years Among the Comanches and Apaches, was actually “the joint production of two of Huylar’s clerks.”

Early New York City directories support the American Agriculturist version of the story. Edward P. Huylar was first listed with the occupation of physician in 1870/1871 and by 1872/1873 he had relocated to 77 Amity Street. A year later his occupation in the directories changed to patent medicine.  In the late 1870’s  Amity Street was renamed West 3rd Street changing Huylar’s address to 77 West 3rd Street. The business operated out of that location until the mid-1890’s and despite the American Agriculturist espose’ the operation was apparently very successful during this time.

In the early 1880’s the business advertised quite a bit, relying heavily on testimonials. (Likely written by the same clerks who wrote their 300 page tome.) In New York City, their advertisements included full page spreads in the major daily’s including the New York Times. This advertisement which took up the entire Page 6 of the Times’ March 8, 1881 edition was typical. Under a huge headline it proceeded to deliver a full six columns of testimonials devoted to the successful cure of specific conditions; dyspepsia and indigestion (2 columns), liver complaint (2 columns), rheumatism and kidney complaint (1 column) and chills and fever (1 column).

According to the advertisement the business did not employ a traveling sales force but instead relied exclusively on wholesalers and agents to distribute their product. The seventh column provided a list of those wholesalers in New York City. 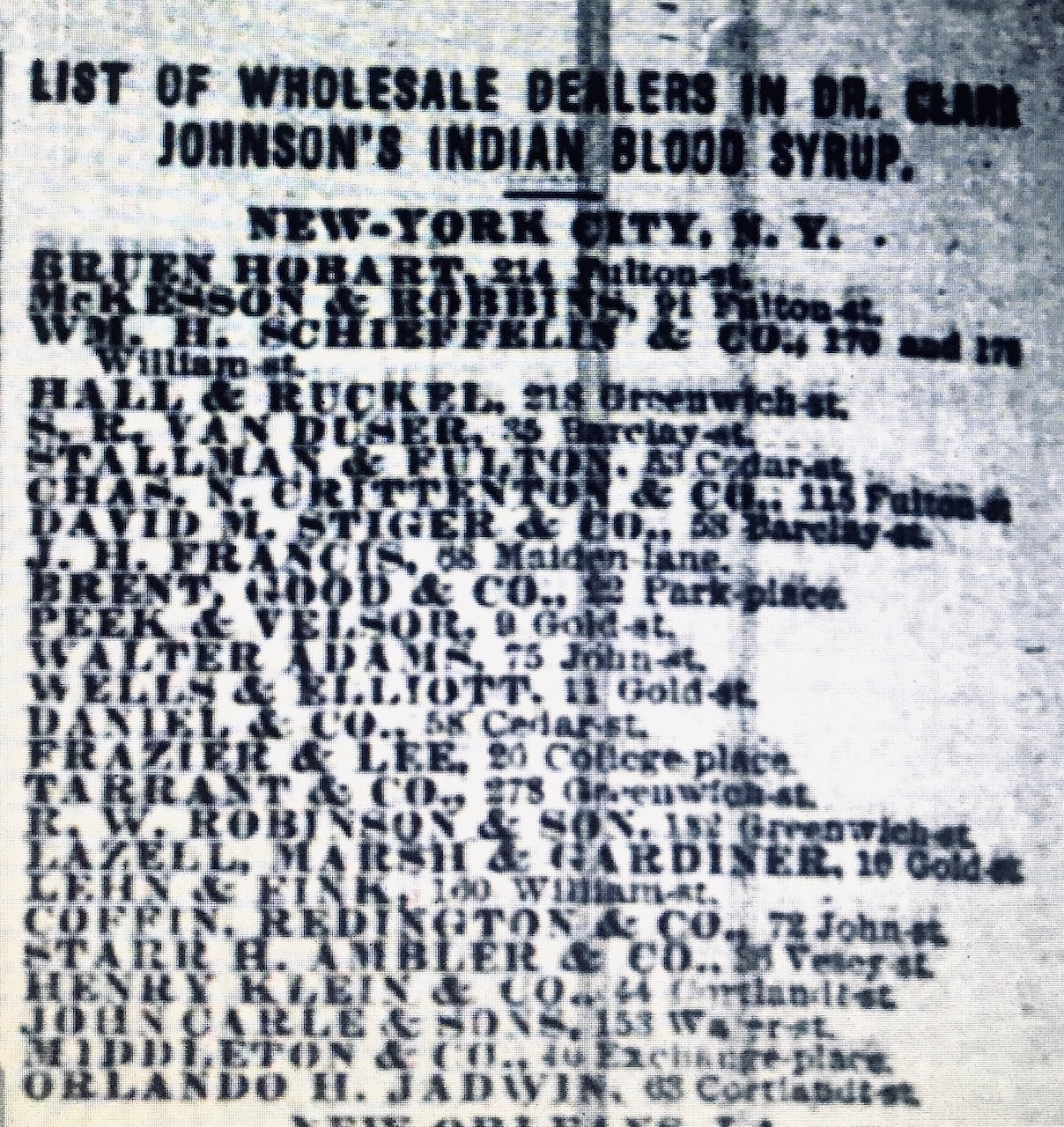 It wasn’t just a local business however, and the column went on to list wholesalers nationwide, including several north of the border in Canada.

Huylar, along with his wife Martha, ran the business until he passed away in 1889.  The following year, on May 1, 1890, Martha sold the business to George Mellville Hard for the sum of $45,000. At the time Hard was also president of the Chatam National Bank,  According to the bill of sale dated May 1, 1890 (found as Plantiff’s Exhibit D in Clark Johnson Medicine Company vs. Allen S. Olmsted) the sale included:

…the entire patent medicine business heretofore carried on by me or my Husband at No. 77 West Third Street and Nos. 236 & 238 Thompson Street in the City of New York, including the good will of such business, all outstanding book accounts against any person pertaining to such business, which in my opinion will aggregate in amount to between twenty thousand and thirty thousand dollars, any and all trademarks, labels, copyrights or other prints, heretofore used in the said business in the sale of the following remedies viz: Dr. Clark Johnson’s Indian Blood Syrup, Cornease, Mother Noble’s Healing Syrup, Sister Agnes Herb Cure, The Electric Health Restorer, Wine of Apocynum and any other medicines or remedies heretofore  manufactured or sold in said Business, also the formula or recipe in writing which is herewith delivered with this bill of sale…

After purchasing the business Hard immediately transferred it to the Clark Johnson Medicine Company, a New York Corporation whose certificate of incorporation had been filed two days earlier on April 29, 1890. The initial directors of this new corporation were Hard, Charles H. Simpson and William H. Osborne.

In the mid-1890’s, the company moved to 17 Lispenard Street in Manhattan where it was still listed in the 1919 NYC Copartnership and Corporation Directory with one of the original directors,William H. Osborne, as president. In the early 1920’s the company moved again and from 1922 to 1931 they listed their address as 510 (sometimes 508) Broome Street. As far as I can tell the business disappeared from the NYC directories in the early 1930’s (they’re not listed in 1933).

By the early 1900’s the manufacture and sale of Clark Johnson’s Indian Blood Syrup was certainly being impacted by the nation’s food and drug laws. The last newspaper advertisement I can find for the product was in the December 30, 1914 edition of the of the Richmond (Indiana) Item. While still outlandish, the advertisement’s copy had been toned down, no longer using the word cure. 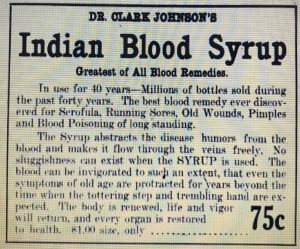 Though no longer advertising in the newspapers, this December, 1917 advertisement in a trade publication called the “National Druggist” suggested that they were still pushing it with their wholesalers and agents at that time.

I’ve seen the Indian Blood Syrup included in published drug price lists up through the early 1920’s. The last price listing I can find was in the October, 1923 edition of the Southern Pharmaceutical Journal and Drug Price Review.

However, as late as October 14, 1932 a shipment of six dozen bottles was confiscated in violation of the Food and Drugs Act. Assuming it was produced at around the same time it was shipped, it’s likely both the company and product end date was sometime in the early 1930’s.

Today the 77 West 3rd Street and 17 Lispenard Street addresses are encompassed by modern buildings that do not date back to the business. According to streeteasy.com, 508 – 510 Broome Street was built in 1900 so it’s the building that the business relocated to sometime between 1919 and 1921. 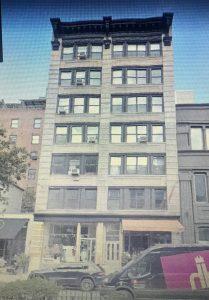 The bottle I found is a mouth blown, roughly 4 oz. medicine. The name “Clark Johnson” is embossed on one of the narrow side panels. The bottle is identical to this labeled example recently offered for sale on the internet. 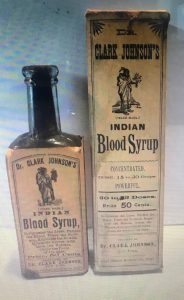 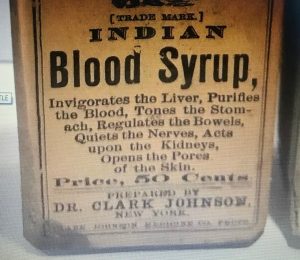 It was sold in both small and large sizes. Based on this labeled example I’ve found the small size. It was yours in 1879 for $0.50.

If you’re interested, the directions for use were included on the back label of the pictured bottle.

From 15 to 30 drops three times a day, in a wine glass of milk or water, is the usual dose for an adult. Should this move the bowels too freely, reduce the dose; if not enough, increase it. Take the medicine INSTANTLY after eating. It is in a very strong and concentrated form and should not be taken clear. In all cases it is better to begin with smaller doses than directed and increase the dose as found necessary.

The syrup can be used externally in cases of Old Sores and Skin Diseases.