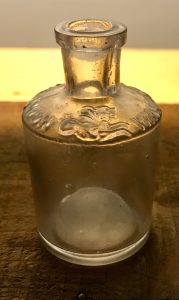 Established in 1832, Winsor & Newton quickly grew to become one of the main suppliers of art related materials in the world, manufacturing a wide array of items that included oils, alkyds, watercolors, acrylics, pastels, brushes, canvases and papers.  Today, the business remains a major player in the art industry.

Originally established at 38 Rathborne Place in London, the company’s history in Britain is documented in great detail by the U. K.’s National Portrait Gallery. Excerpts from that history are presented below.

In 1837 Winsor & Newton acquired a varnish factory at King’s Cross and also took premises at Blackfriars for the grinding of oil colors. These facilities were replaced or extended in 1844 when they set up a steam power factory in Kentish Town, known as the North London Colour Works which continued in use until 1938.

William Winsor’s partnership with Newton was dissolved from 31 December 1864, some months before his death. His son William Henry Winsor (1831-79) inherited his father’s share of the Winsor & Newton business, which was subsequently purchased by Newton.

Winsor & Newton’s canvas, brush and woodwork manufacturing facilities were relocated to Wealdstone in Harrow in 1898, with the color works following in 1937 and head office in 1938. Brush making was moved to a new factory at Lowestoft in 1946.

The last family member to act as a director of the company was Guy Newton, great-grandson of the founder. Winsor & Newton became a public company when it floated on the stock exchange in 1957. It acquired Charles G.Page of Tottenham, maker of toy metal paint boxes in 1963. Winsor & Newton Ltd itself was acquired by Reckitt & Colman in 1976. In 2006 Winsor & Newton was owned by the Swedish based ColArt.

Less than 20 years after the company’s inception advertisements for their products began to appear in United States newspapers. The earliest advertisement I could find, published in the April 16, 1851 edition of the Vermont Family Gazette, provided a menu of available Winsor & Newton materials under the heading “Fresh Importations.” 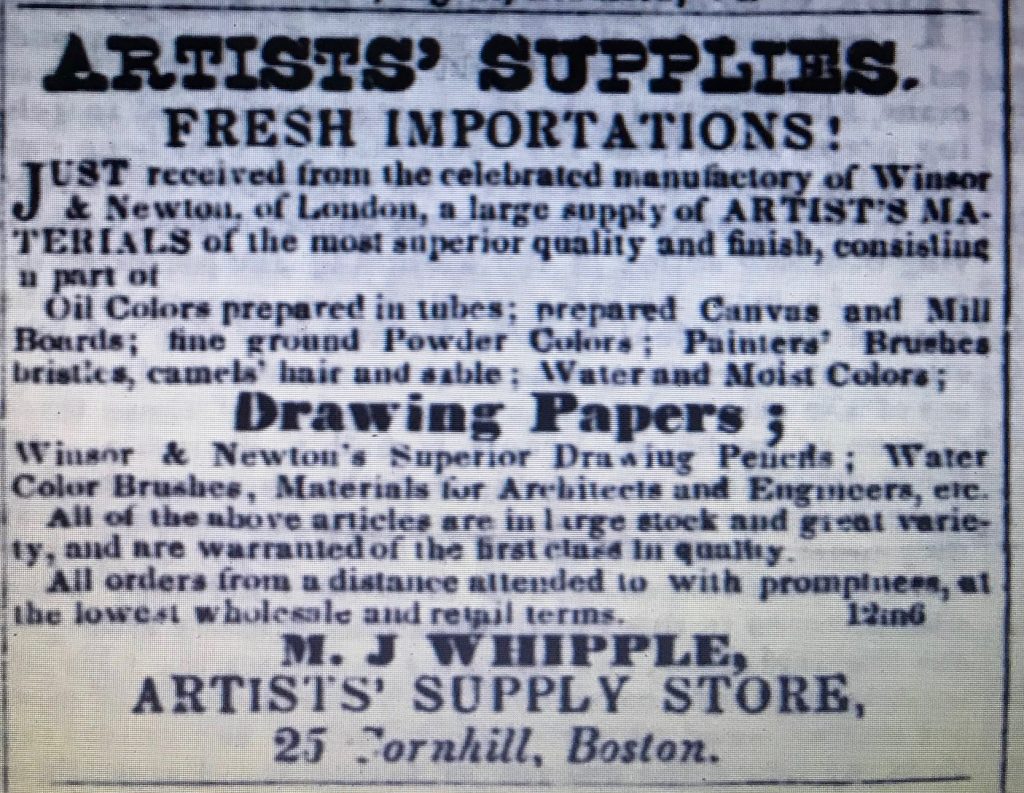 The advertisement was prepared by the firm of M. J. Whipple of Boston, Massachusetts who described themselves  as “importers of artists’ and drawing materials in every variety.” Up through the late 1880’s the company apparently used import firms like Whipple to distribute their products in the United States.

In New York City, it’s likely that one of the first companies to import their materials was Masury & Whiton. Both a manufacturer and importer of artists’ materials, they were associated with Winsor & Newton dating back to 1857/1858 and possibly earlier under their former name of Masury & Weeks.

The New York Sketch Book and Merchants Guide, dated 1858, included a description of Masury & Whiton that made reference to their relationship with Winsor & Newton.

In artists materials Messrs. Masury & Whiton are probably the largest in the United States. It is a general depot for artists’ materials for the trade, of any and every conceivable description.

Having agents in Paris and London, this firm has unequaled facilities for the importation of goods, while there own manufacturing resources enable them to supply, either in large or small quantities, any article connected with plain, fancy or ornamental painting…

The 1858 Sketch Book and Merchants Guide went on to say that, at the time, Masury & Whiton maintained a commodious factory in Brooklyn and a warehouse situated at No. 111 Fulton Street and No 50 Ann Street, having a front on each Street.

Other New York City area importers of artists’ materials that advertised Winsor & Newton materials were C. W. Keenan and M. H. Hartmann. Both advertised Winsor & Newton art materials in the mid to late 1880’s. C. W. Keenan was a Brooklyn firm that at the time was located on the corner of Fulton Street and Jay Street. Their advertising items quite often appeared in the Brooklyn Daily Eagle.

Hartmann was located in Manhattan at the corner of 12th Street and Fourth Avenue. This advertisement appeared in the January 9, 1886 edition of Home Decoration. 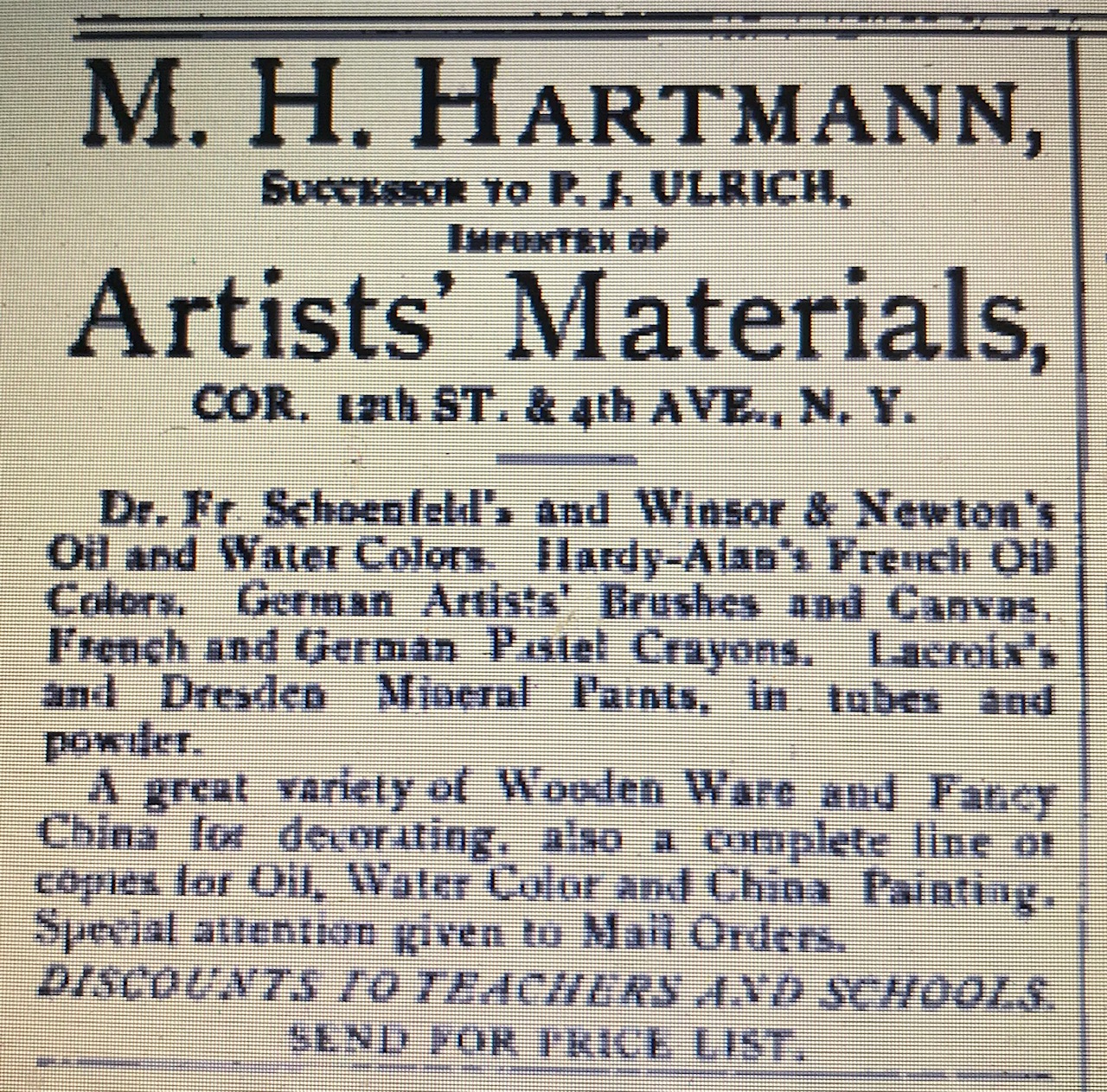 According to the U. K.’s Portrait Gallery, by 1889 Winsor & Newton had established a company presence in New York City. That being said, I can’t find a NYC directory listing for them until 1897. Adding to the confusion, according to his 1926 obituary, the company’s long time New York manager, Louis A. Munkelt did not arrive in the United States until 1894. Based on this information I think it’s safe to conclude that by the mid-1890’s Winsor & Newton was operating in the United States.

This is further evidenced by the fact that at around this time the availability of their products, at least in New York City, was expanding from the artists specialty stores to include the City’s major department stores. In the mid-1890’s both Loeser’s and Abraham and Strauss had established artist departments and were advertising Winsor & Newton products, among others. In 1899 another major department store, H. Batterman’s followed suit. Their announcement was printed in the June 6 edition of the (Brooklyn) Standard Union. 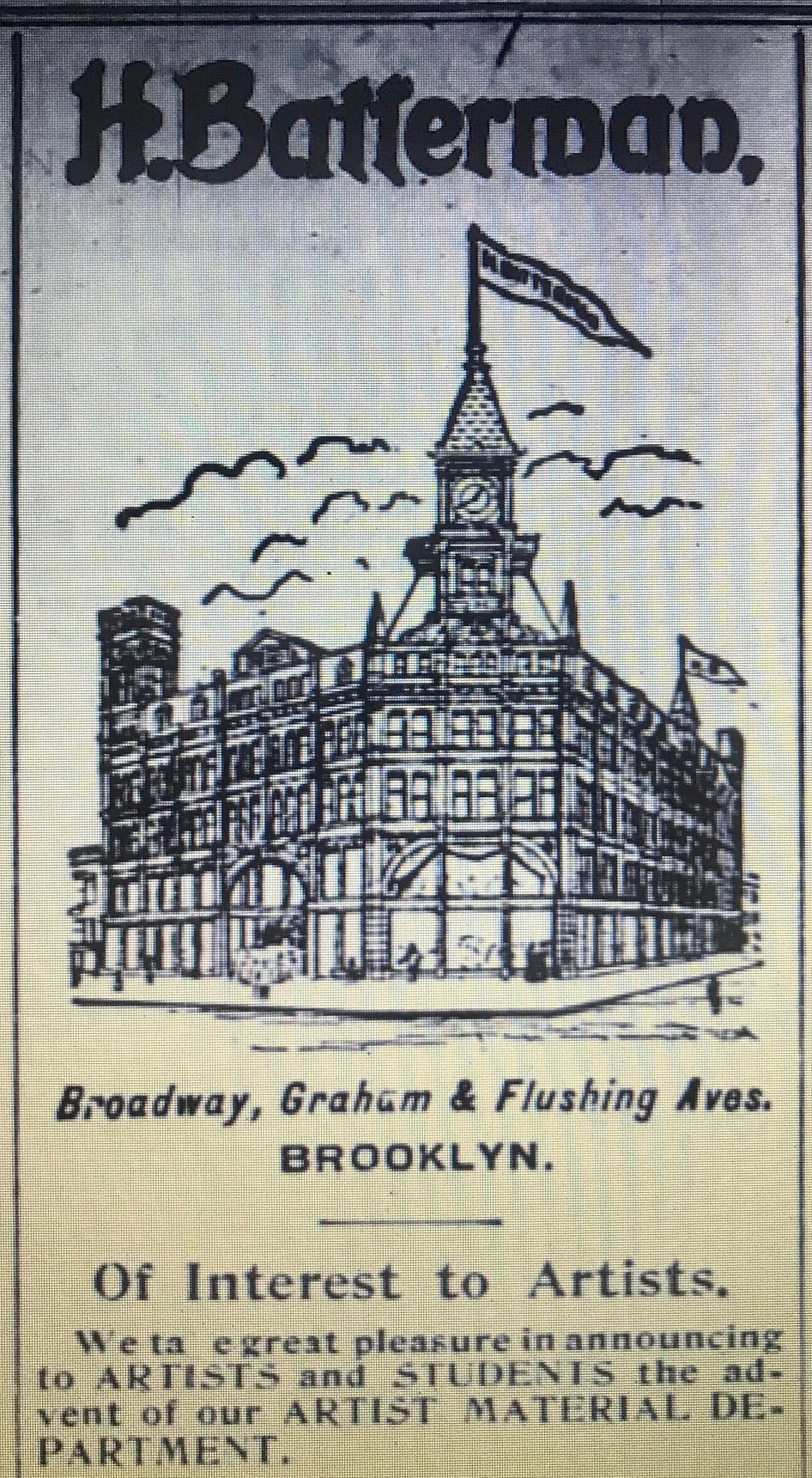 The advertisement went on to say in part:

By 1900 Macy’s had included Winsor & Newton materials in their advertising as well.

The first address I can find for Winsor & Newton’s New York operation was 88 Fulton Street where they were listed from 1897 through 1904. This advertisement from 1900, found in the July through September issues of a publication called The International Studio referred to it as Winsor & Newton’s American Office.

In 1905 their address changed to 298 Broadway, where they would remain listed through 1916. 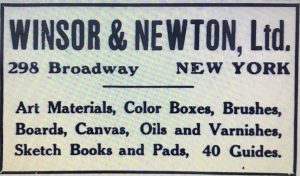 In June, 1914 the business incorporated in New York as the “American Agency of Winsor & Newton, Inc.” The incorporation notice was published in the June 18, 1914 edition of the Brooklyn Daily Eagle. 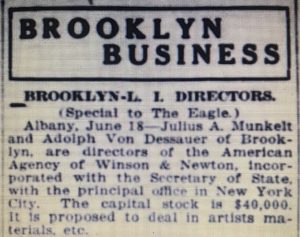 Julius A. Munkelt was listed as one of the new company’s directors. Munkelt had been associated with the company’s New York operation for most, if not all of its existence. Prior to being named a director in the new corporation  he was included in their directory listings as either their New York manager or agent.

A year later another incorporation notice, this one published in the November 22, 1915 edition of the Eagle, announced that the company had apparently reorganized in New York under a new name, “Winsor & Newton, Inc., with no change in management. 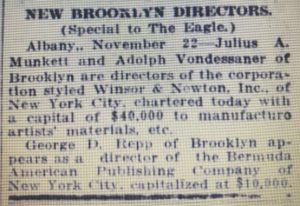 Shortly after the second incorporation the company moved again. The 1917 American Art Annual listed their address as 31 East 17th Street. This 1924 advertisement highlighting their catalog reflected the new company name and address. 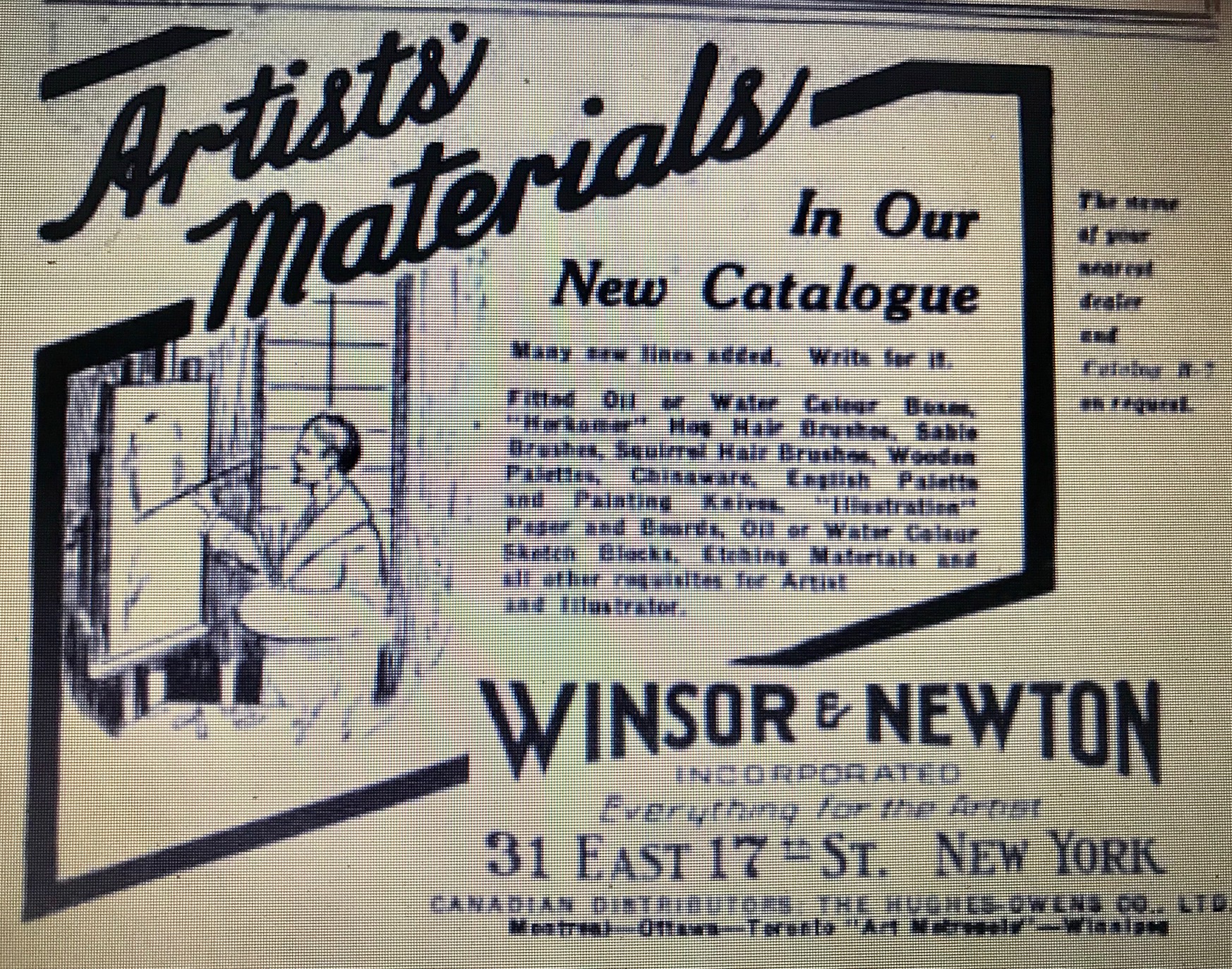 By the late teens it appears that long time New York manager Julius Munkelt had retired. (According to his obituary he had been with Winsor & Newton for 42 years) The 1918/1919 NYC Copartnership and Corporation Directory named Chas. V. T. Trickett and Adolph Stephani as directors with no mention of Munkelt.

The bottle I found appears to be a small ink. Mouth blown, it’s an inch and a half in diameter and a little less than three inches tall. It likely dates between the late 1800’s and early 1900’s, around the time the company transitioned their New York operation from Fulton Street to Broadway. This price list found in the 1908 edition of “A Manual of the Principal Instruments used in American Engineering and Surveying,” may provide a clue as to what it contained.

Embossing on the top of the bottle’s shoulder reads “WINSOR & NEWTON LONDON,” along with the company trademark. 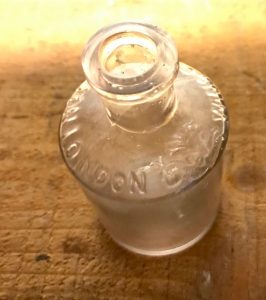 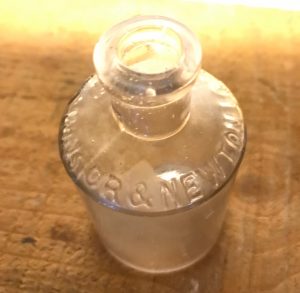 The trademark was described in the company’s application filed with the United States Patent Office (7,133) on November 26, 1877 as “the representation of a sea lion.”

The U. S. trademark certificate was ultimately issued on March 25, 1879. 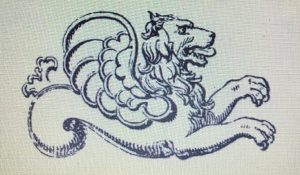 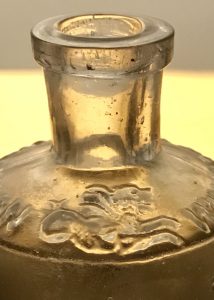 I’ve also seen the trademark referred to as a “heraldic lion” and a “griffin.”