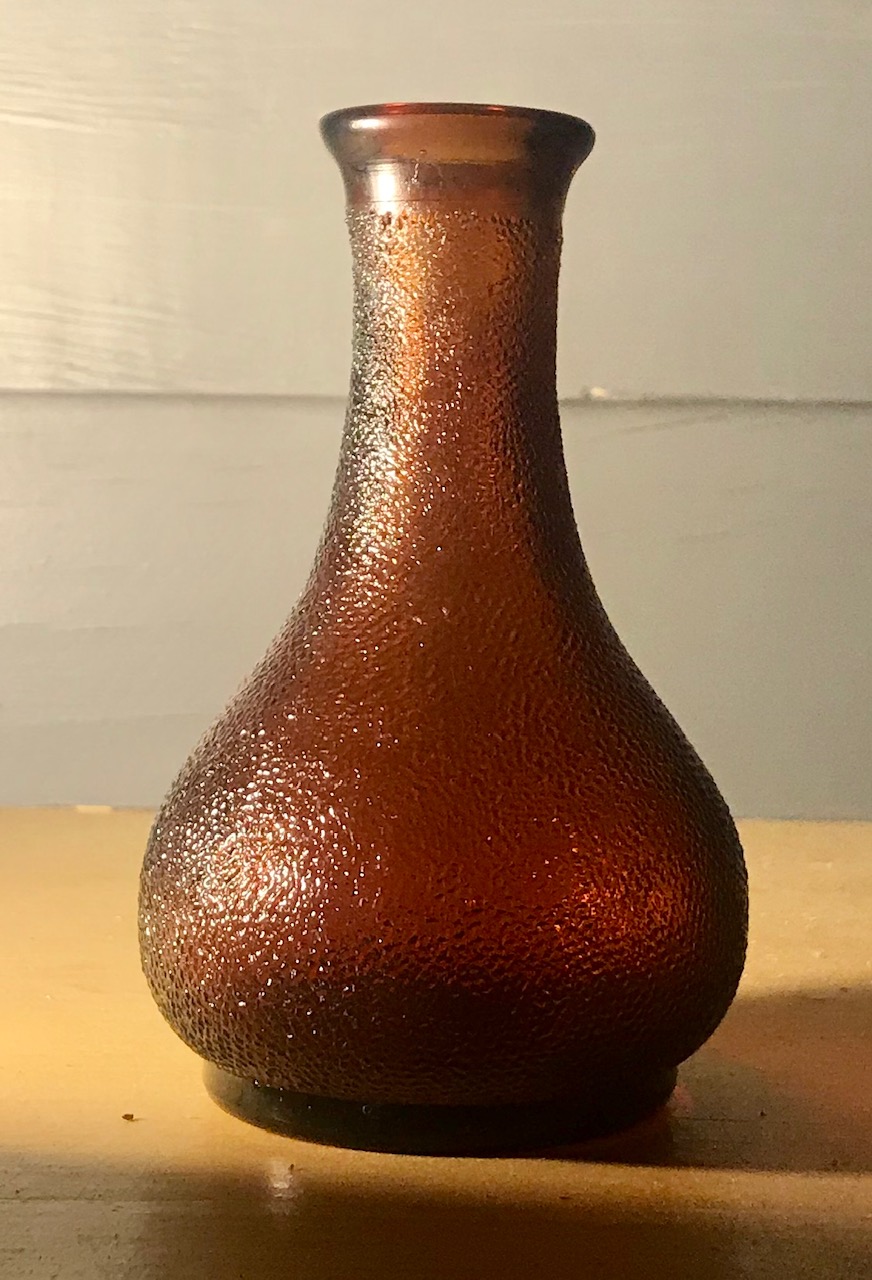 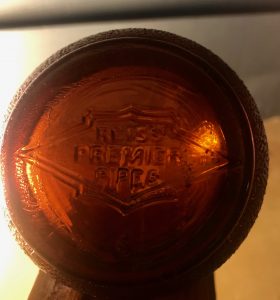 Unlike other bottles presented on this site the above bottle did not contain beverages, medicines or perfumes, but was in fact the water bottle associated with a 1920’s hookah. Manufactured by the Reiss-Premier Pipe Company, a recent ebay advertisement showed an example of the pipe as it likely appeared back in the day. 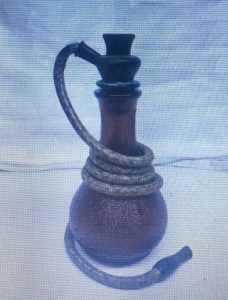 The Reiss-Premier Pipe Company had its roots with a Chicago Company called Reiss Brothers & Company. First listed in the 1887 Chicago Directory with an address of 163 Lake Street, the company listing included the term “smoker’s articles,” and named the initial proprietors as brothers Julius and Otto Reiss and their brother-in-law, Nathan Burger. The company continued to be listed in this fashion until 1909/1910.

Nathan Burger passed away in 1909 and by 1910 Otto Reiss was no longer included in the company listing. Julius passed away sometime in 1913 or 1914, which apparently left the business in the hands of Nathan Burger’s son, Jacob (John) D. Burger. The 1914 and 1915 directories listed both Jacob Burger and the estate of Julius Reiss as proprietors. By 1917, the business had moved to 208 West Monroe and Jacob Burger was listed as the sole proprietor.

It was Jacob Burger, who, according to his November 2, 1943 obituary in the Hackensack (N.J.) Record, established the Reiss-Premier Pipe Company in 1920, when he merged the Reiss Brothers Company with the Premier Briar Pipe Company.

The Premier Briar Pipe Co. had previously incorporated in mid-1913 as a successor to the Carl Hirsch Company which had been established on December 21, 1912. A New York Corporation with capital of $ 50,000, the 1914 NYC Copartnership and Corporation Directory listed the company address in Manhattan at 501 East 70th Street. Carl Hirsch was named president and Paul Mayerosch secretary. The following year, the 1915 directory stated that the company had moved to West Hoboken New Jersey.

The start of The Reiss-Premier Pipe Company was announced in the January 8, 1920 edition of a publication called “Tobacco.”

The new Premier-Reiss Pipe Co., successors to Reiss Brothers & Co., is now in working order. Their Chicago salesroom and offices are located at Wells & Monroe Streets. They feature pipes and holders with Redmanol stems and they have a trade that promises to be largely increased.

The Wells & Monroe Street location mentioned in the above story was likely the former location of Reiss Brothers & Co. but according to this May 25, 1922 item in “Tobacco” within two years they had moved their offices and established a new warehouse.

The Reiss-Premier Pipe Co. has opened new offices in the Hunter Building at 339 W. Madison Street. The new warehouse is now located at 32-40 South Clinton Street.

It’s also likely that they initially utilized the Premier Briar Pipe Co.’s West Hoboken N. J. location as their manufacturing facility but I haven’t been able to confirm this. Ultimately, the company established their primary manufacturing facility in West New York, New Jersey at 6400 Broadway where their factory encompassed an entire city block.

In the early 1920’s the company established a New York City presence as well. The 1922 NYC Directory listed Reiss-Premier at 37 w 39th with John D. Burger named as N Y Manager. Later, by 1926, the company had moved their New York location to 277 5th Avenue where they were listed through at least 1932.

In 1926 the company acquired Kaufman Bros. & Bondy, originators of the famous Kaywoodie pipe brand. At the time, this made them the largest manufacturer and importer of pipes in the United States. The August 18, 1926 edition of the Brooklyn Daily Eagle summarized the acquisition and described the make-up of the organization at that time

In 1929 United Cigar Stores of America acquired a large minority share in Reiss-Premier. The transaction was announced in the April 13, 1929 edition of the Brooklyn Daily Eagle.

The Reiss-Premier Pipe Company is an Illinois corporation which operates chiefly through subsidiaries.

As mentioned in the 1929 article above, the company operated primarily through subsidiaries and apparently there were quite a few of them. In addition to the board chairmanship of Reiss-Premier, Burger’s obituary named him as chairman of subsidiaries Kaufman Brothers and Bondy and the Kaywoodie company. The company was also intimately connected with the New England Briar Pipe Company, in Penacook, New Hampshire and the Transylvania Pipe Company in Brevard North Carolina.

Another subsidiary that I can identify with Reiss-Premier was the Pacific Briarwood company, located in Santa Cruz County in California.  Incorporated in July 1941, the company was established to cut and cure manzanita wood required for the manufacture of Kaywoodie pipes. According to a June 25,1941 story in the Santa Cruz Evening News the wood supply was needed because the supply from France, Italy and Africa had been cut off as a result of World War II. By 1947, with the war long over, the company suspended operations.

His obituary also named Burger as Chairman of the Board of Lorr Laboratories, which indicates that at the time of his death the overall organization was not just exclusively associated with the manufacture of pipes and smoker’s articles. According to a story in the February 20, 1937 edition of the Paterson (N.J.) Morning Call:

The Lorr Laboratories serve various large chain drug stores in supplying them with a well-assorted pharmaceutical line of goods, toothpaste, cod liver oil, aspirin tablets, and various other staple articles in the drug line. The Lorr Laboratories are intimately associated with the Reiss-Premier corporation, a company which manufactures approximately one-half of the tobacco smoking pipes manufactured in this country.

Burger’s obituary went on to say that he served as Chairman of the Board of Reiss-Premier until his death in November of 1943. At that time, Rudolph Hirsch, the nephew of Carl Hirsch assumed leadership of the company. Hirsch was already intimately involved in the operation, serving as President of Reiss-Premier as well as President of the New England Briar Pipe Company, Transylvania Pipe Company, Pacific Briarwood Company and the Kaywoodie Company.

S.M. Frank & Company remains in business to this day in upstate New York and continues to manufacture a series of Kaywoodie pipes.

Around the same time, Lorr Laboratories was acquired by A. R. Winarick Inc., makers of Jeris Hair Tonic. A story in the January 16, 1955 edition of the Central New Jersey Home News mentioned that acquisition.

Nat Winarick, secretary of the company and its chief chemist, recently announced the firm had purchased the Lorr Laboratories of Paterson (N.J.), makers of Dura-Gloss nail polish.

A story printed in the December 26, 2006 edition of the Hudson Reporter stated that S. M. Frank maintained the pipe manufacturing facility in West New York, New Jersey until 1972. Subsequently, sometime within the last decade, the building was demolished and the location is currently a vacant lot. The following photographs, one taken prior to demolition and the other afterwards and both from roughly the same angle, give one a sense of the size of their New Jersey operation, which, according to the Hudson Reporter story, at the height of production employed over 500 people and produced up to 10,000 pipes per day. 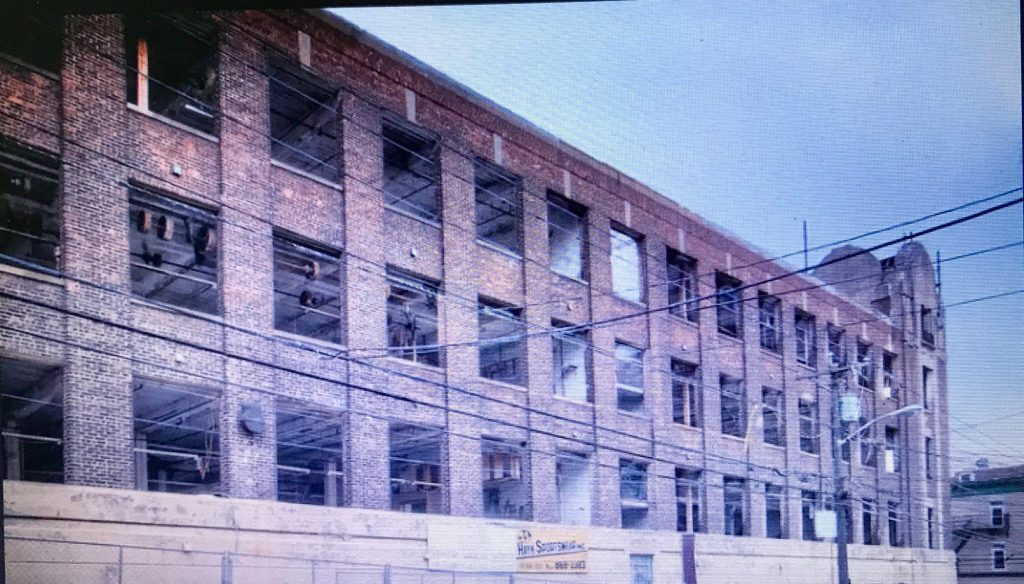 The bottle I found is machine made which fits the post 1920 start of the company. In fact, in the mid-1920’s the Reiss-Premier Pipe Company applied for a patent that included, in addition to pipes and cigar and cigarette holders, an item entitled hookahs.

I couldn’t find any  advertising material specifically associated with the Reiss-Premier Hookah but this December 1, 1927 Daily News article may explain why there may have been some demand. 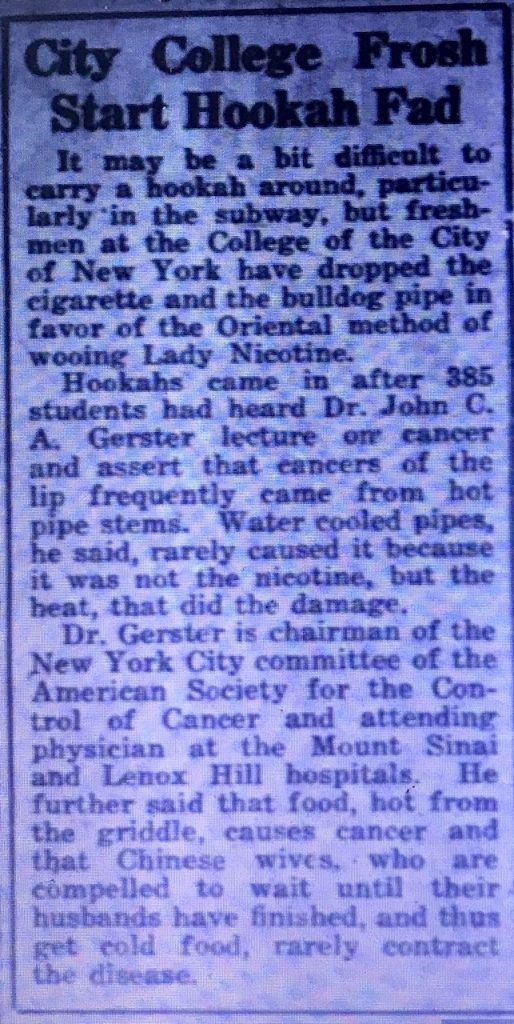