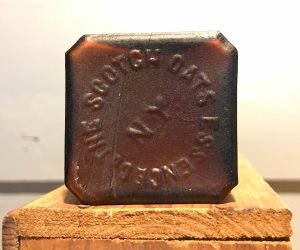 Henry H. Kane, patent medicines, was listed in the NYC directories between 1886 and 1888 at 174 Fulton Street. Newspaper advertisements for the Scotch Oats Essence Company that also use that address, date back to the fall of 1885. The only directory listing specifically for the Scotch Oats Essence Company that I can find is in the 1889 NYC Copartnership and Corporation Directory with an address of 160 Fulton Street. By January, 1889, the company was out of business. The January 11, 1889 edition of the Burlington (Vermont) Independent summed it up rather succinctly.

It is gratifying to learn that this pernicious fraud has proved a losing business, in consequence of its exposure by the medical and sanitary authorities, and the concern has failed.

The rise and fall of Scotch Oats Essence begins with the purported benefits of the preparation. Even in the unrestrained patent medicine era their claims were extravagant. One of their advertising pamphlets was summarized in a July 1889 edition of the Boston Journal of Health.

The praises of this (Dr. Buckland’s Scotch Oats) occupy the body of the pamphlet. It was to cure paralysis, epilepsy, dyspepsia, alcoholism, premature decay, headache, sterility, and, note this, the opium and morphine habits. It is declared to be “adapted to infants and octogenarians” alike, and that it destroys the craving for opium, morphine, alcohol and chloral.

This advertisement from the October 31, 1885 edition of the (New York) Sun covers a lot of the same territory and adds:

It builds up, restores and reinvigorates without falsely stimulating. wholly free from all Narcotics 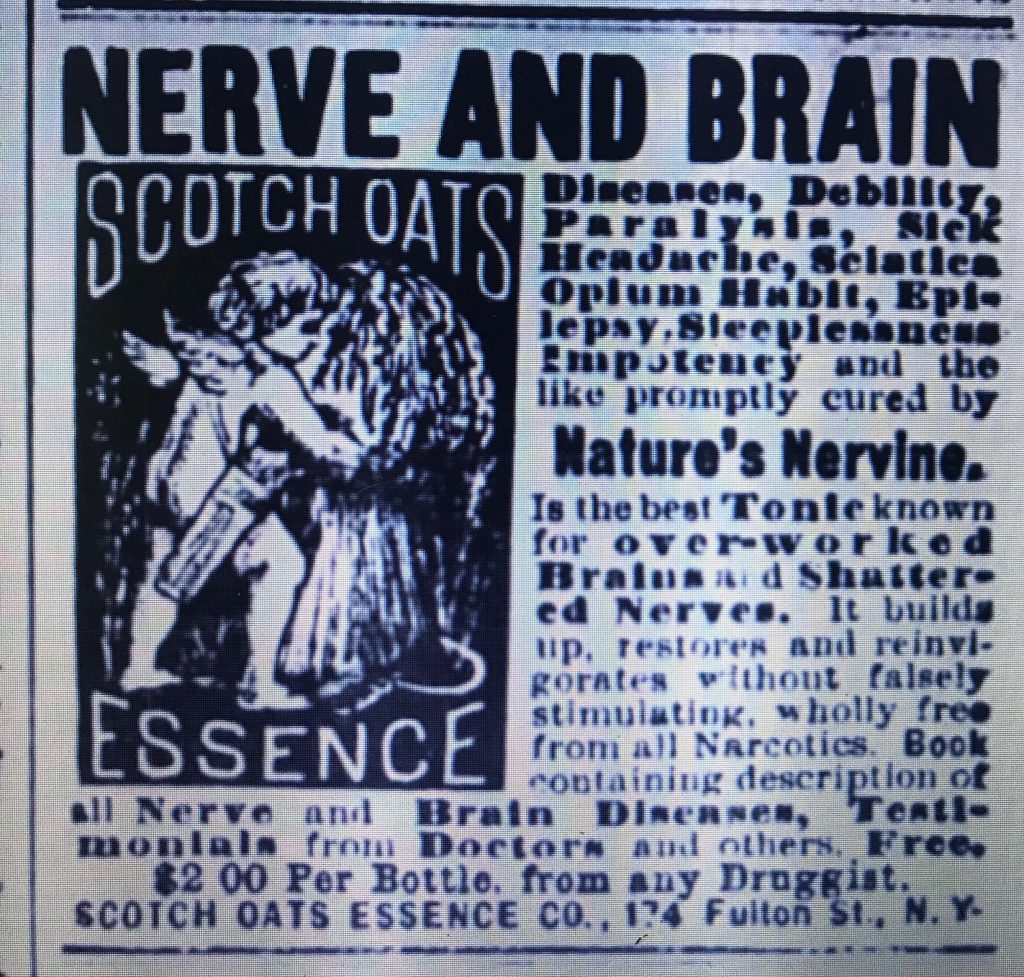 Another advertisement  claimed that their remedy contained “three of the most beneficial, yet harmless, medical agents known.”

Avenesca – a white amorphous powder that has a direct and distinct nerve tonic, heating and anti-spasmodic action;

Boskine – a principle found in oatmeal husk that keeps the blood pure, digestion perfect and the brain and mind clear

The company advertised extensively, much of it preying on the fear and lack of knowledge of the general public at the time. Many of their advertisements linked minor, everyday ailments endured by just about everyone with serious deadly consequences. In these newspaper advertisements from 1886, they linked common occurrences like headaches and sleeplessness with insanity, paralysis and brain softening. The cure? Scotch Oats Essence, of course. 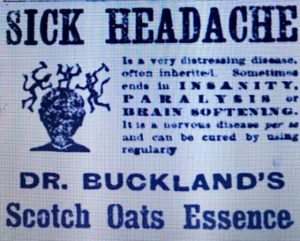 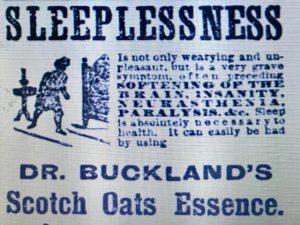 This “Four Little Pigs” advertisement that I found in the November 10, 1887 edition of the New York Times outrageously pushed this concept even further. 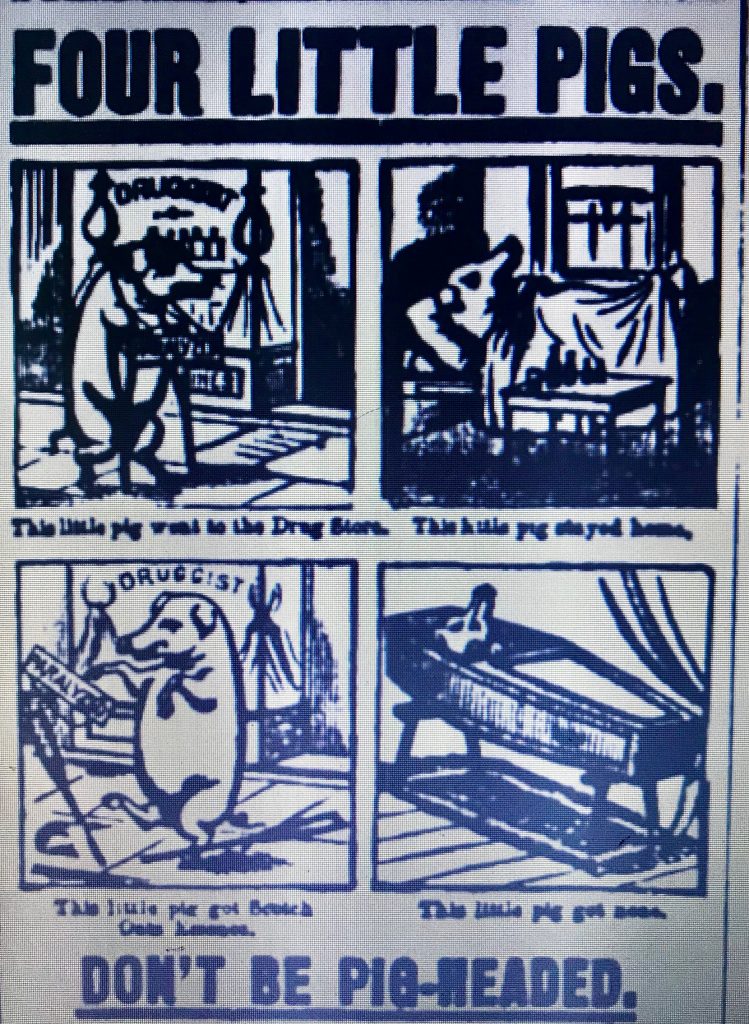 This little pig went to the drug store

This little pig got none

With the little pig who got none depicted in a coffin!

Motivated by the outlandish claims, outlandish advertising and resultant  popularity of the preparation, in the first few months of 1888, a publication called “The Druggist Circular and Chemical Gazette” performed an independent analysis of it’s contents. The results of the analysis, printed in their April, 1888 issue, revealed that the preparation contained a combination of alcohol and morphine. The rather lengthy “Druggist Circle”  story was summarized quite nicely in an April 20, 1888 edition of the Chicago Tribune.

The exposures which have been recently made of the contents entering into the composition of the proprietary tonic known as Scotch Oats Essence serve to call attention to a great and growing danger. This patent medicine has been freely advertised as a “tired brain and tired nerve recuperator,” a cure for the morphine or opium habit, and a medicine that the aged and infants alike could take with safety and benefit.As most persons are more or less tired in brain or nerves in this busy, driving world it is natural that the stuff should have a large sale. The qualities claimed for it, as well as its wide sale and use, have led to analyses of it by prominent chemists, with the result that they find it contains 40 per cent of alcohol, which is a pretty considerable quantity of liquor when large doses are taken. Worse than this, every four ounce bottle of the fluid contains from one-third to one-half a grain of morphine, which both chemists and doctors say is sufficient to create an appetite for the poison instead of curing the habit, as it claimed for the medicine. Dr. Edson of the New York Board of Health says of it: “The sale of the nostrum cannot be stopped too quickly. The feeding of children on morphine is a thing that cannot be stopped too soon, to say nothing of innocent adults being given the morphine without knowing it.” Dr Eccles, Dean of the Long Island College Hospital, who has analyzed it, also says:

“Without a shadow of a doubt, then, Scotch Oats Essence contains morphine. “Avenesca,” the fanciful title somebody has given the active agent of this proprietary preparation, is, then, a synonym for morphine, and the article that, like opium, will “quiet pain and produce sleep” is after all morphine. It is this thing, too, that is pledged to destroy the morphine craving and “free the victim from this terrible bondage.” To sat that “the infant and octogenarian may alike use it without harm and much benefit” is calculated to mislead the unwary in a manner that is pitiable.

The Druggist Circular didn’t stop there but attempted to track down the Dr Buckland who’s name was associated with the product. A month later, their May, 1888 edition made it very clear that the good doctor never existed.

A representative of the Circular visited Milford Conn., the alleged birthplace of this “great benefactor of the human race,” and found that the oldest inhabitants had never heard of a Dr Buckland, had never even heard of such a family, and did not believe that any such person or family had ever lived in or near Milford within the last 90 years…The fame of this marvelous man has, through a liberal use of printer’s ink, spread over the whole United States, while the place of his alleged birth has never heard of him and even denies his very existence.

The story went on to compare a portrait of the supposed Dr Buckland taken from a Scotch Oats Essence advertising pamphlet with that of a German violinist and composer named Ludwig Spohr who died in 1859. 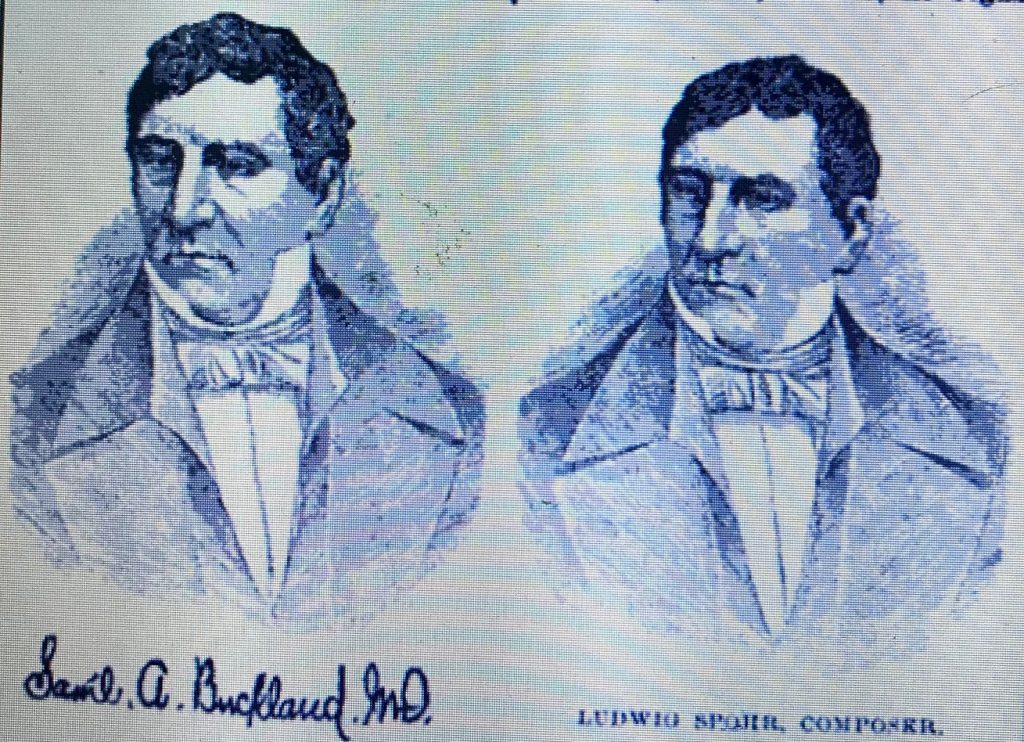 It is interesting to note the resemblance to the alleged Dr Buckland, in every little detail, and it would seem on the first glance that some unscrupulous person might have passed him off on the Scotch Oats Essence makers as a good looking figure-head to use as an inventor; one who would inspire and hold the confidence of the public, while they were being victimized.

The company attempted to fight back in the newspapers. In this May 13, 1888 advertisement in The (Philadelphia) Times they labeled the Druggist Circular’s analysis as a “Cowardly Attempt at Assassination” 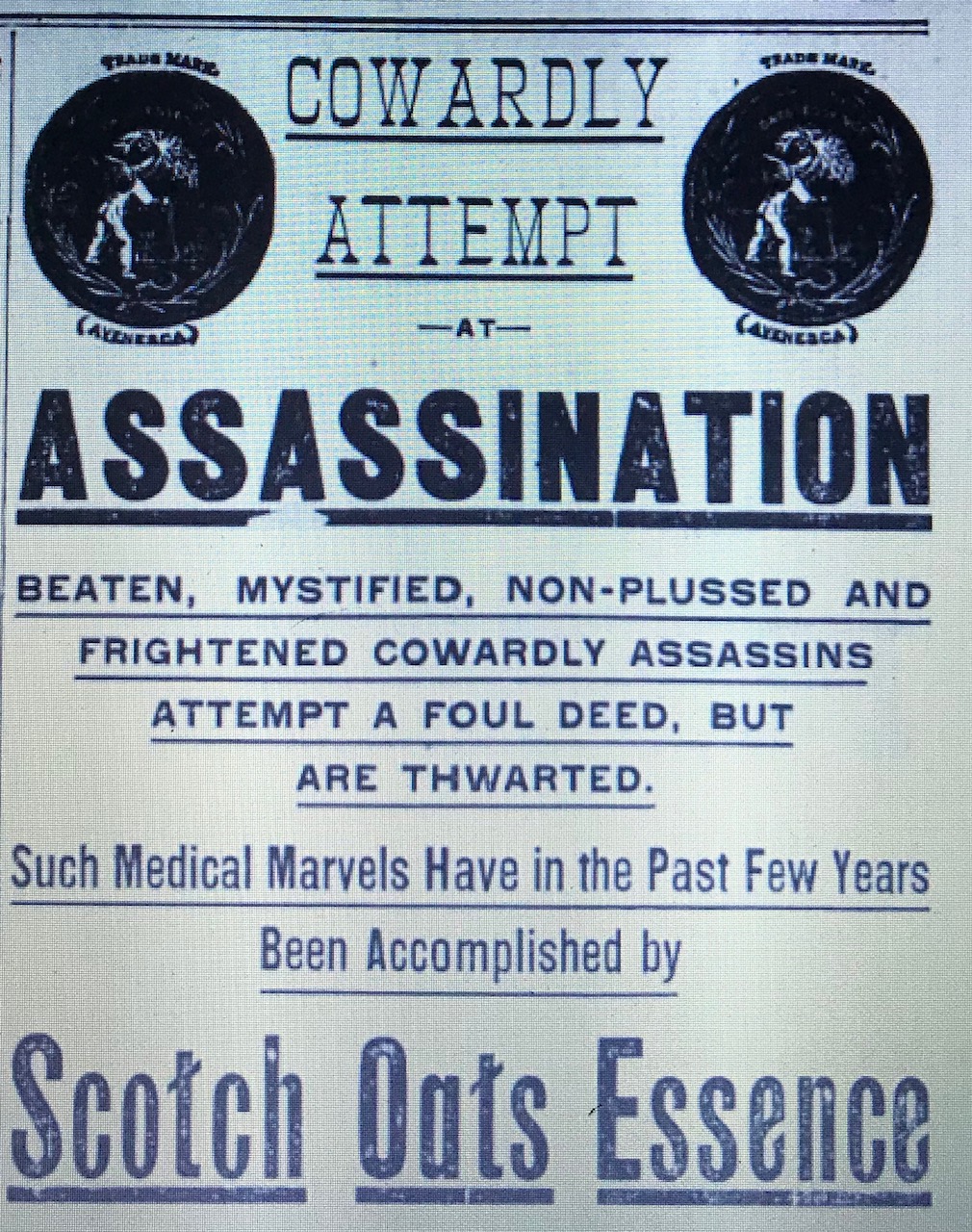 The advertisement went on to say:

So many hopeless invalids, paralytics, dyspeptics, neuralgics have been wholly cured, so many pompous doctors have seen hearty and strong patients whom they have pronounced incurable, or given up to die; so many beds of labor have been robbed of the pangs and dangers of childbirth; so many times has the doors of the madhouse and the inebriate asylum been shut in the very faces of poor victims by the timely use of Scott’s Oats Essence, that a certain clique decided that it “must be put down,” “destroyed,” “wiped out” at any cost, and they proceeded to try and do it. But “truth will prevail,” for every case that Scotch Oats Essence has cured a hundred friends and defenders of the remedy have been raised up, and its reputation is so strong today, that no clique, no lying, no false outcry, no ridiculous accusations or false reports can encompass its ruin.

And their defense was quite predictable.

Doctored specimens of the remedy with which poisonous drugs had been stealthily injected through the cork or placed in the bottles were sent to certain chemists and several Boards of Health, and these innocent and honest men were made unjustly to take sides with the assassins and were used by them to defame the great remedy.

Nonetheless, rather quickly, the Druggist Circular articles were picked up by the newspapers and by the end of the year the sheriff’s office had closed it down. The December 1888 issue of the Western Druggist reported the company’s demise.

Another obituary notice is in order; the Scotch Oats Essence Company has departed this life, and its mortuary advertisement appears in the form of a notice under “Sheriff’s Sales,” thus constituting the liveliest and truest announcement the company ever had. The wind-up occurred in consequence of two judgements, for $8,131 and $31,479 respectively, and it is likely we have heard the last of this concern.

While that may have been the end of Scotch Oats Essence, Kane continued on as a scam artist until he ended up in prison. According to this July 1, 1906 story written at the time of his death:

Dr. Henry H. Kane whose career in this city was full of vicissitudes died on Thursday at Saranac Lake of tuberculosis. He was taken ill about a year ago, soon after his release from prison, where he had been sent for four months, after his plea of guilty to the charge of having defrauded John W. McCullum of Mount Vernon of $10,000 by means of an alleged “radium treatment.”

Dr Kane conducted a sanitarium at 136 West Thirty-fourth Street when he was arrested in 1905. The detectives who had been making an investigation of his methods said he had made a fortune through fraudulent practices.

The bottle I found is a mouth blown 3 to 4 ounce square medicine. It certainly dates to the 1885 to 1888 life span of the company. It resembles several labeled examples recently advertised for sale on the internet. 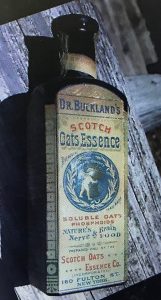 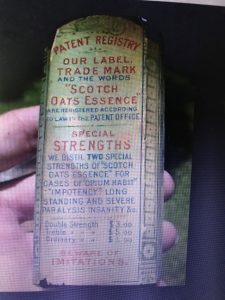