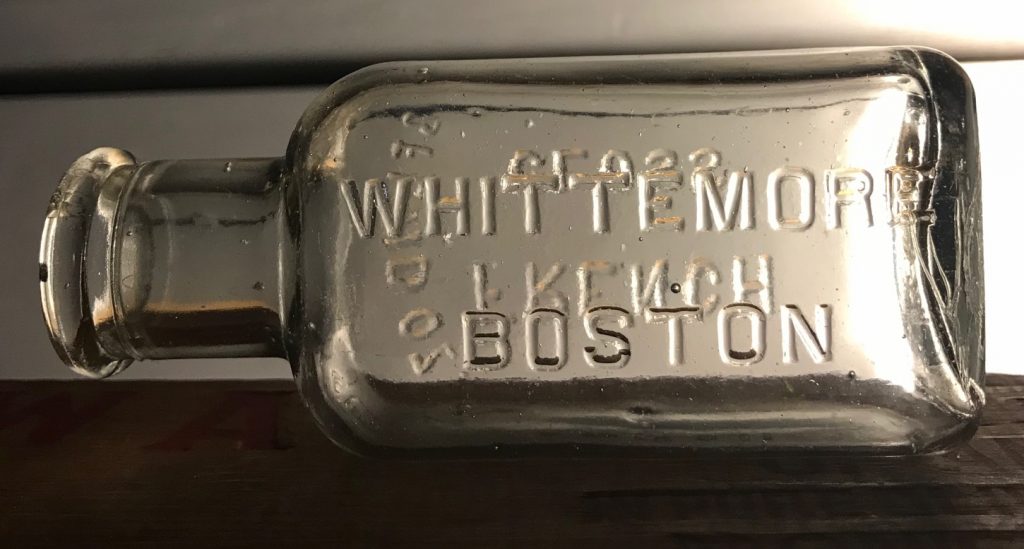 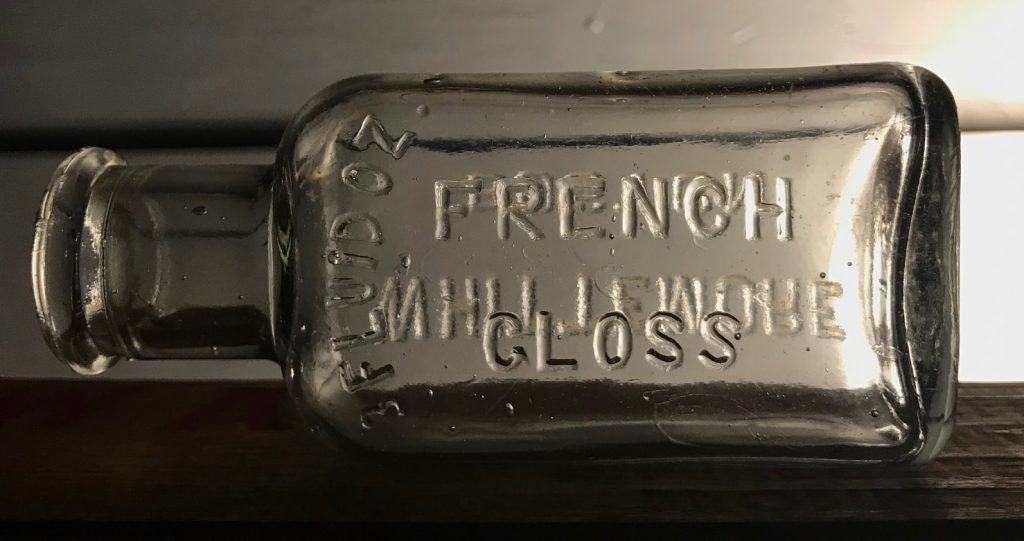 Sometime in the late 1860’s or early 1870’s, Daniel Whittemore’s sons, John Q.A. and Charles Whittemore established the company of Whittemore Brothers & Co. That business was first listed in the 1873  Boston City Directory as manufacturers of leather dressings with an address of 100 Lincoln. The two Whittemore brothers along with a third partner, W. Augustus Paine, were named as proprietors.

In 1902 the company apparently moved across the Charles River to Cambridge Mass. The 1902 Boston directory included an advertisement that located them in Cambridgeport.

The following year, in 1903, the company was first listed in the Cambridge City Directory at 20 -26 Albany Street. (Apparently there are two Albany Streets; one in Boston and another in Cambridge.) The directory that year also included an advertisement that mentioned both an office and factory at that location. 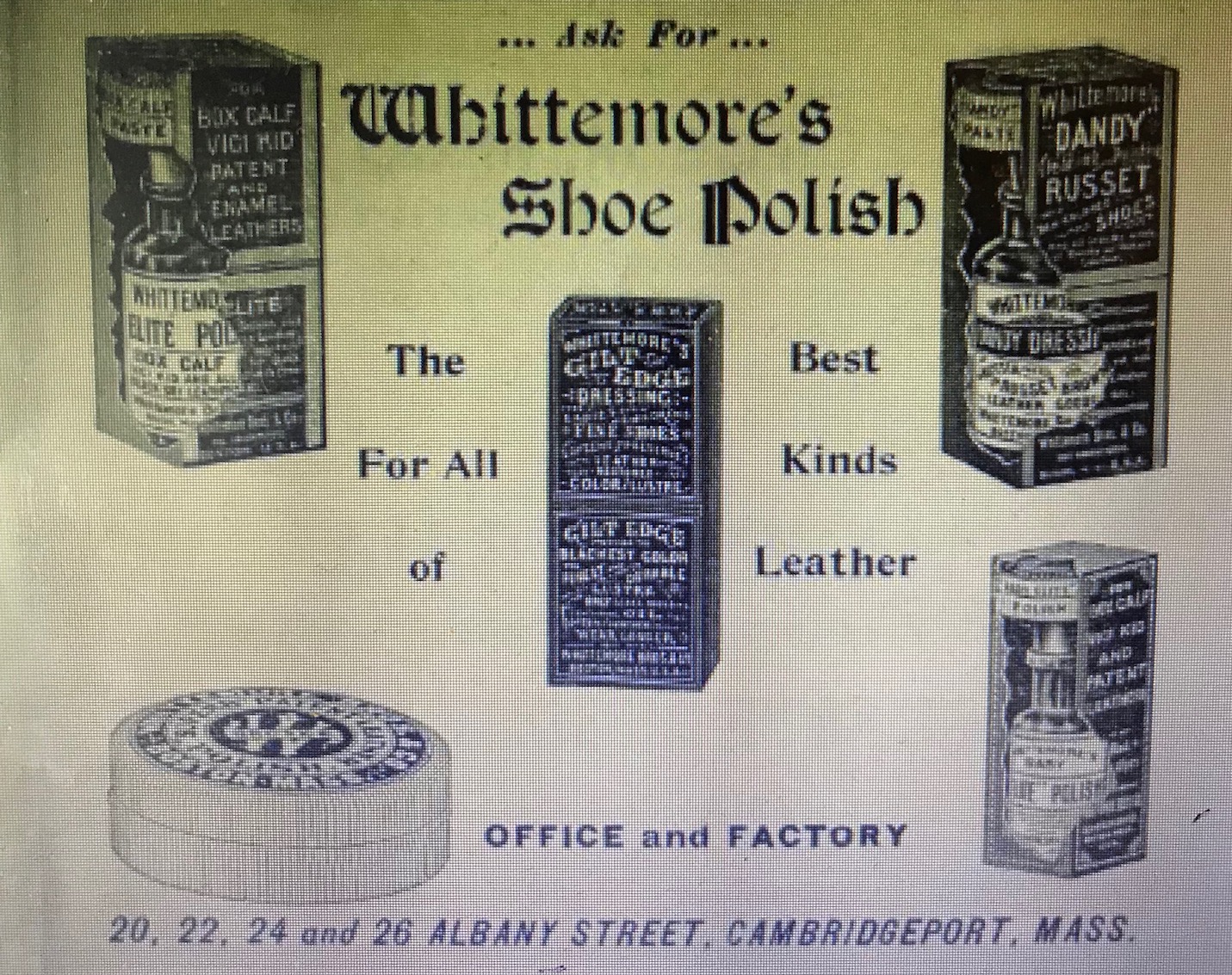 This December 1911 advertisement printed in the Pharmaceutical Era called Whittemore the “Oldest and Largest Manufacturers of Shoe Polishes in the World.” 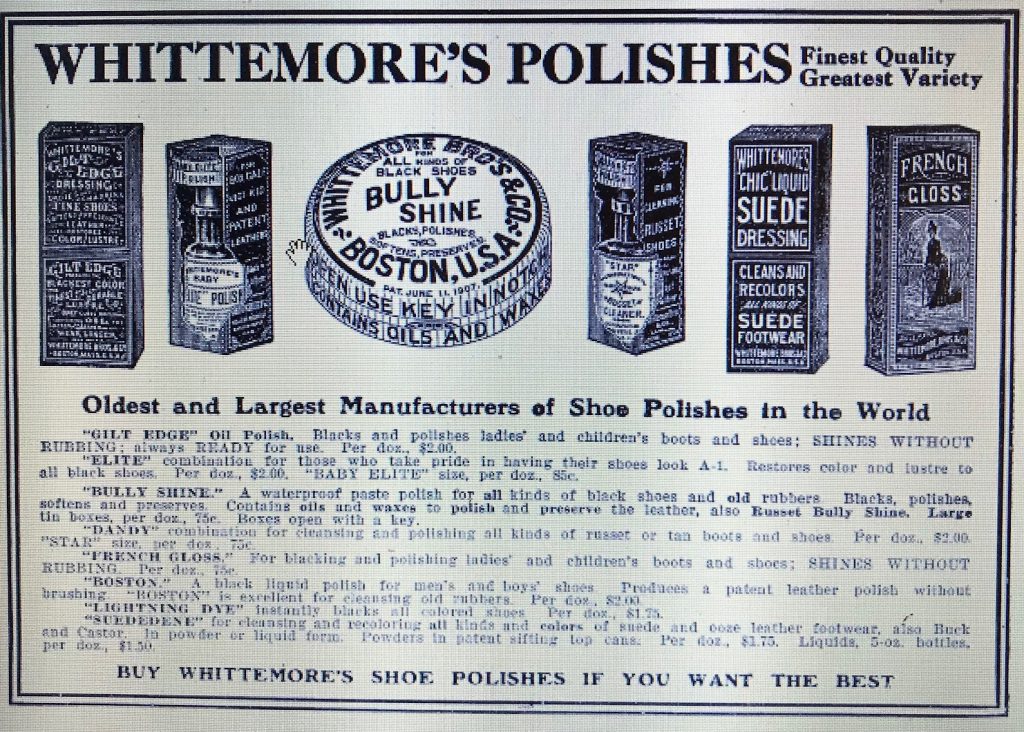 It also named a wide array of brands, including “French Gloss” that were being sold under the Whittemore name and the purpose of each. They included:

“GILT EDGE” Oil Polish. Blacks and Polishes ladies’ and children’s boots and shoes. SHINES WITHOUT RUBBING; always ready for use.

“ELITE” combination for those who take pride in having their shoes look A-1. Restores color and lustre to all black shoes.

“BULLY SHINE.” A waterproof paste polish for all kinds of black shoes and rubbers. Blacks, polishes, softens and preserves. Contains oils and waxes to polish and preserve the leather, also Russet Bully Shine.

“DANDY” combination for cleaning and polishing all kinds of russet or tan boots and shoes.

“FRENCH GLOSS.” For blacking and polishing ladies’ and children’s boots and shoes. SHINES WITHOUT RUBBING.

“SUEDEDENE” for cleansing and recoloring all kinds and colors of suede and ooze leather footwear, also Black and Castor. In powder or liquid form. Powders in patent sifting top cans.

An advertisement from 1930, specific to the “French Gloss” brand stressed that it “Shines Without Brushing” and  focused on children’s shoes.

It is very easily applied, dries quickly, covers those annoying scuffs which children have in footwear and can be used also on rubbers. 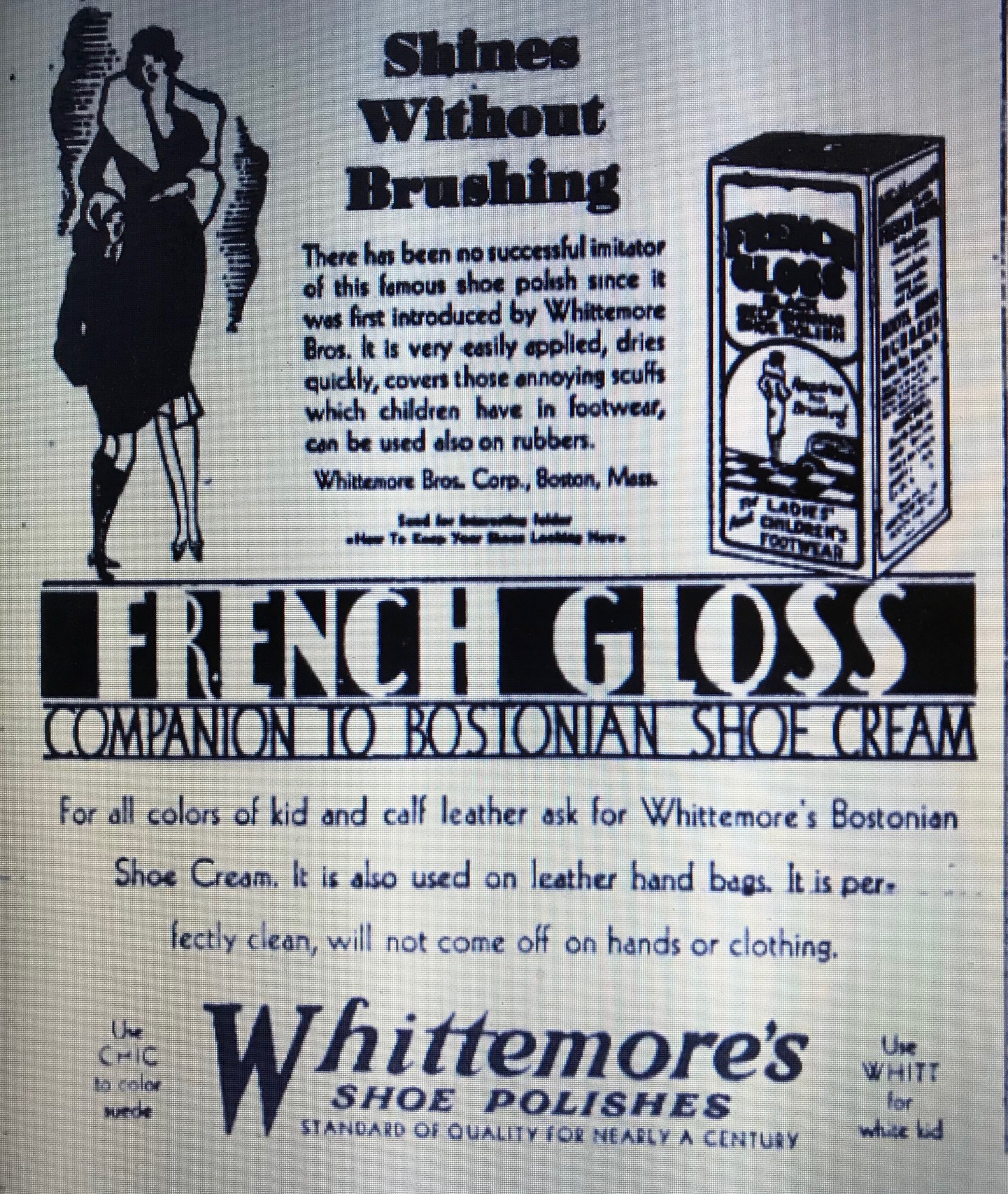 It’s not clear when “French Gloss,” was first introduced as a Whittemore brand. An item called “French Gloss for Ladies’ Shoes” was included in an advertisement for a store named Jewett’s in the November 30, 1869 edition of the Buffalo (N.Y.) Daily Courier so its possible that the brand dates back to the origins of the business. That being said, I can’t positively associate the brand with the Whittemore name until the 1890’s. It continued to be advertised into the 1940’s.

The bottle I found is machine made and contains 3 ounces. It’s embossed “Whittemore Boston” on one side and “French Gloss” on the other. It was most likely manufactured in the latter part of the company history, probably 1920’s or 1930’s