It appears that the Pinus Medicine Company was started in 1903 or 1904 by Henry F. Edsall in San Francisco, California. The company was first listed in the 1904 San Francisco Directory with an address of 734-736 Valencia. Fruitola advertisements begin appearing in 1904 as well. The earliest one I could find was in the January 12, 1904 issue of the Oakland Tribune. Marketed as a system cleaner it claimed to remove gall stones and cure all stomach troubles. 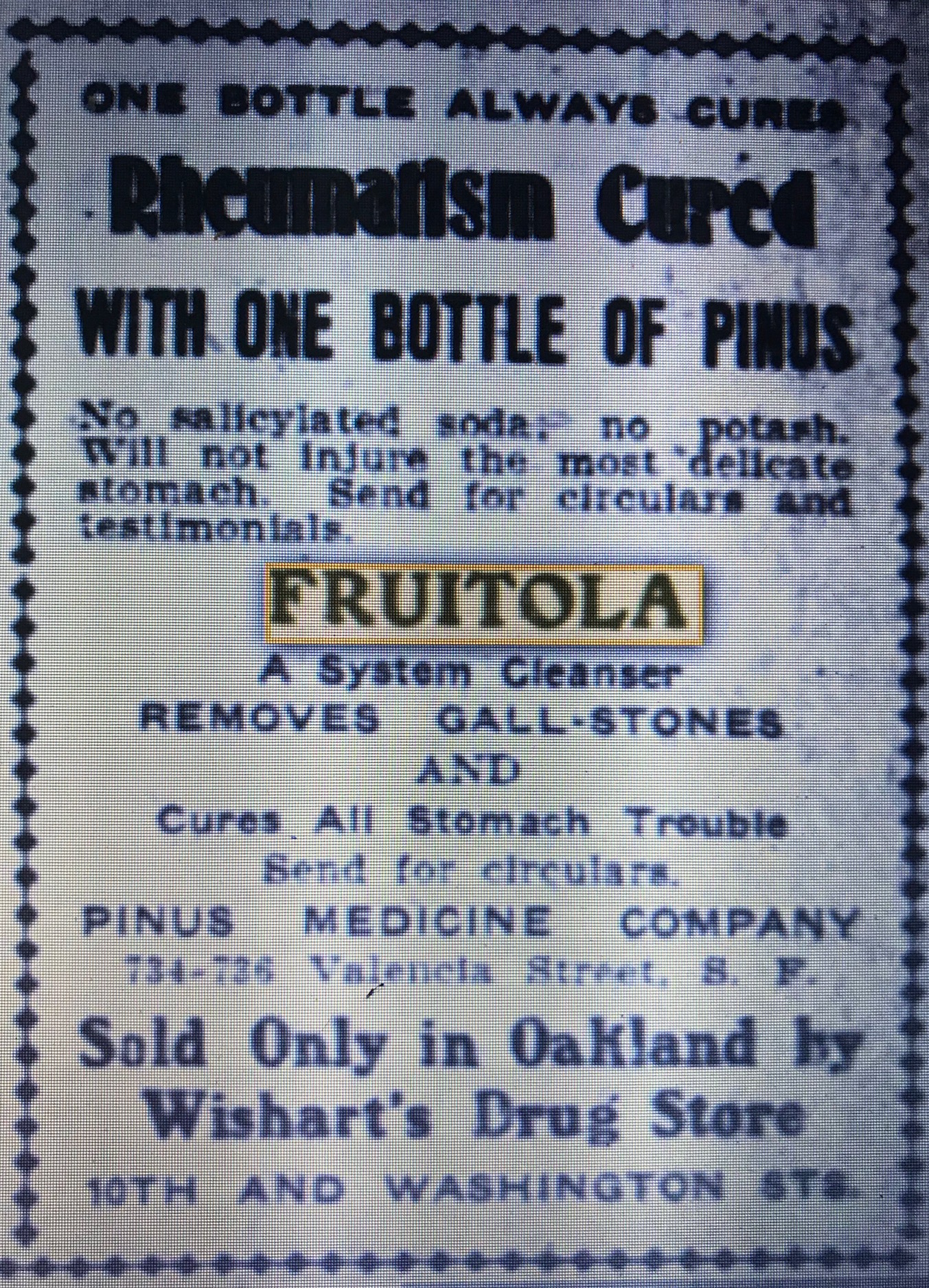 It was advertised with another product called Pinus which I have to assume was the inspiration for the company name.

Sometime in 1906 or 1907, Edsall moved the business to 622 West 9th Street in Los Angeles and on January 5, 1910, the Los Angeles Times reported that the business had incorporated with capital of $100,000. H.F. Edsall, Elizabeth Edsall and John P. Newell were listed as directors.

Anyway, that same year the company was sold. On November 5, 1913 the Los Angeles Times reported:

It was announced yesterday by Henry T. Edsall of the Pinus Medicine Company of this city that he had disposed of a majority of his stock in the corporation to Allen F. Moore of Monticello, Illinois. Moore is the president of the Dr. Caldwell’s Pepsin Syrup Company. The amount involved is understood to be about $100,000. The business of the Pinus Medicine Company, which Edsall has built into a large concern, will be continued in this city and branches will be established in the East.

I have to believe that the local press was mislead into believing that the company would remain in Los Angeles because less than two months later they had relocated to Monticello, Illinois, the home of the Pepsin Syrup Company. According to the January 1914 issue of the National Drug Clerk:

An announcement of much interest to the drug trade is found in the advertisement of the Pinus Medicine Company in this issue. It will be noted that this business is now located at Monticello Ill., a controlling interest having been acquired by the stockholders of the Pepsin Syrup company. 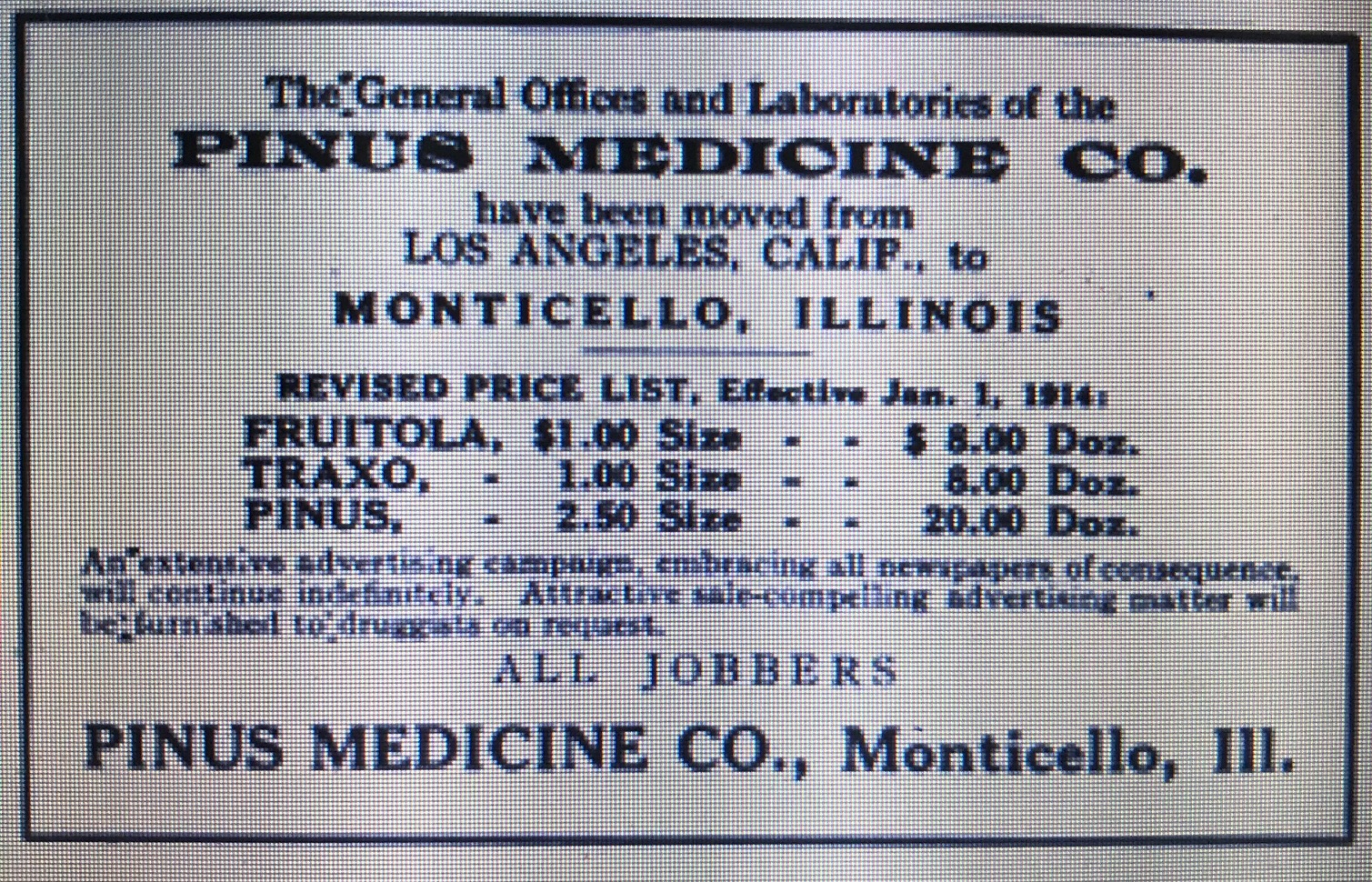 The initial act of the new management, reducing the trade price from $9.00 to $8.00 per dozen, will undoubtedly appeal to all druggists as is an indication of the broader spirit of cooperation that characterizes their policy.

Our readers are familiar with the liberal advertising policy and spirit of trade cooperation that has made Dr. Caldwell’s Syrup Pepsin a staple remedy with a constantly widening field, and with the experience and resources of the new management a largely increased trade in Fruitola, Traxo and Pinus can confidently be expected.

A compelling newspaper advertising campaign, National in its scope, has been inaugurated and will be continued indefinitely, insuring a persistent, constant and permanent call for these preparations. Attractive advertising material will be furnished druggists on request and no effort will be spared to make Fruitola, Traxo and Pinus as staple as is Dr. Caldwell’s Syrup Pepsin.

The advertising campaign promised in the above article apparently came to fruition. Between 1914 and 1919, newspaper.com alone identifies over 4000 advertisements in 30+ states. A significant portion of the advertisements involved testimonials from people who used and were subsequently miraculously cured by Fruitola and their digestive tonic named Traxo. Many included photographs and were presented to look more like news stories than advertisements. A woman “saved from the operating table”  was highlighted in one example from a 1916 issue of the Potsdam New York Courier & Freeman. 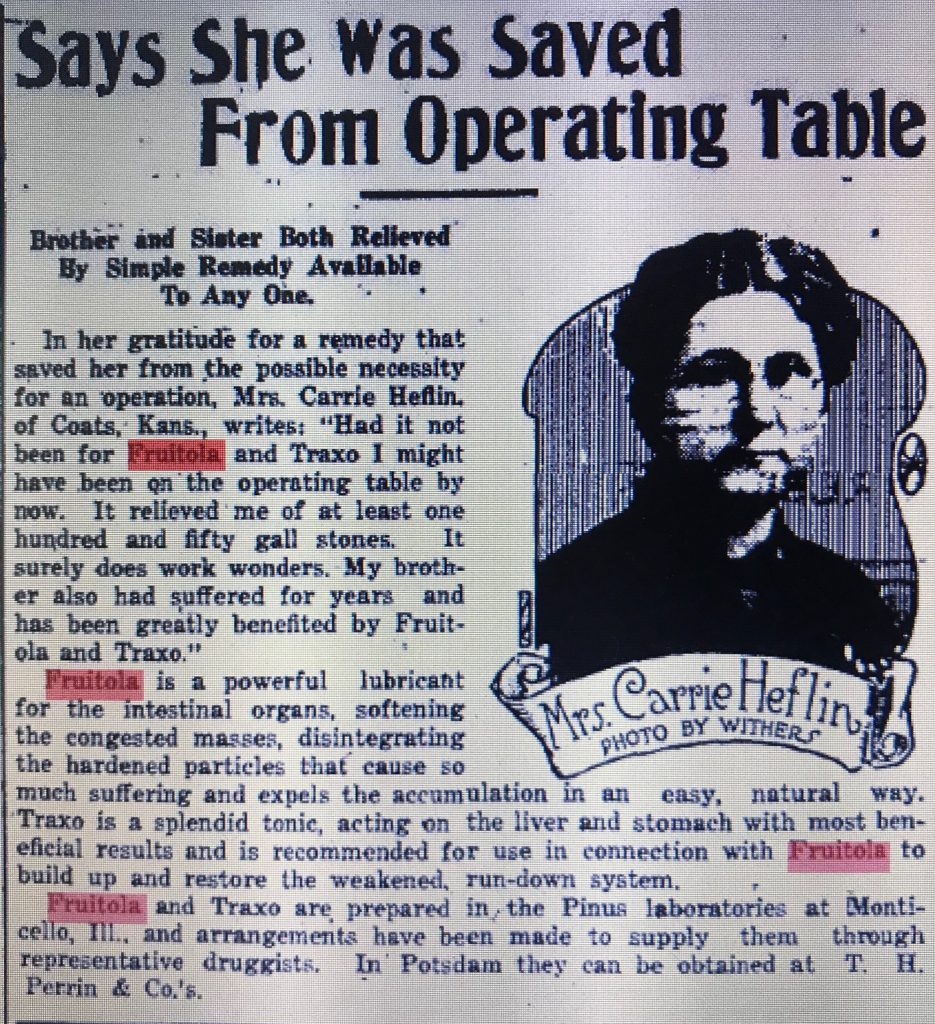 As early as 1910, the American Medical Association was identifying Fruitola’s curative abilities as a total scam. According to an item in the December issue of the A.M.A Journal that year:

Of more recent origin is what may be called the “fake gallstone trick” which is now being industriously worked in many parts of the country. Originally operated by traveling fakers, it has been lately adapted to the exigencies of the “patent medicine” industry. The principle on which the fake depends is the well known fact that in giving the patient massive doses of some bland oil will result in the passing of soapy concretions. These lumps, greenish in color and of varying sizes, are easily mistaken by the laymen for “gallstones.”

There are several modifications of this “gallstone cure” fake but the most widely advertised is that sold by the Pinus Medicine Company, of Los Angeles, under the name “Fruitola.” It is usually exploited in connection with another nostrum – “Traxo” – put out by the same concern.

Fruitola consisted of an eight ounce bottle of oil and six powders. The A.M.A. item went on to describe one woman’s experience with Fruitola.

One of my patients, a young woman, took the contents of this bottle, as well as the powders, which accompany the liquid as part of this treatment. Several hours after taking the medicine there were several painful evacuations, in which there appeared a large number, probably two dozen or more, small greenish masses about the size of an ordinary garden pea. The young woman was very much frightened, thinking that they were really gallstones and that she was in a serious condition.

Of course, the “gallstones” were simply soapy concretions that usually follow the administration of massive doses of oil.

The A.M.A.’s conclusion is actually quite humorous.

That persons should be mulcted of a dollar, however for the privilege of having their bowels moved and being made into a peripatetic soap factory may seem humorous – but it is an outrage nonetheless. To such as wish to make the experiment – and it is one that by no means is free of danger in all cases – we would suggest the following procedure as equally efficacious and much less expensive: Buy 20 cents worth of olive oil and a nickel’s worth of seidlitz powders. You then have all the paraphernalia necessary for the production of home-made gallstones. All that is required is to take the oil and powders and then practice watchful expectancy. The expected will happen.

Possibly as a result of this negative information, the Pinus Medicine Company went through several ownership changes in the late teens and early 1920’s. According to an article on the company in the January 25, 1959 issue of the Decatur Herald & Review, in 1919 it was taken over by Charles Demaree and then sold to William Dighton in 1922. The company remained successful enough to build the Pinus Medicine Company Building at 116-118 East Washington Street in Monticello, where they moved in September 1923. It appears that the building still exists today on the northwest corner of East Washington and North Independence Street.

In 1928 the company was purchased by John Hott, a former vice president of the Pepsin Syrup Company. The November 14, 1928 issue of the Alton Evening Telegraph reported the sale.

After being connected with the Pepsin Syrup Company for nearly quarter of a century in the capacity of second largest stockholder and vice president, John F. Hott, who is nationally known to the drug trade, has resigned his position and purchased the Pinus Medicine Company, who manufacture Fruitola for gallstones and stomach trouble. It is Mr. Hott’s idea to develop and expand the business by adding other well known preparations to the line.

Not surprisingly, around this time the Fruitola advertisements have been toned down quite a bit. Words and phrases like “cures” and “removes gallstones” have been replaced with ambiguous phrases like “recognized treatment for gallstones” and “lubricates and flushes intestinal tract.” 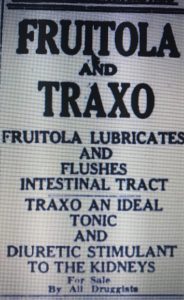 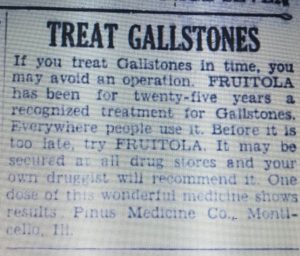 John Hott ran the company until his death in 1933 after which it was taken over by his son Max Hott. The company remained in Monticello and was still active, though barely, in 1959. According to the 1959 Decatur Herald and Review article, it was still owned by Max Hott but was down to two employees. They were still making three proprietary medicines including “Traxo” and “Fruitola”which was being marketed as “Fritola.”

The bottle I found is a 6 to 8 ounce machine made medicine. It’s embossed “Fruitola” on one side and “Pinus Medicine Co., Monticello, Ill., U.S.A.”on the other. It dates no earlier than the company’s 1914 move to Monticello.