Hay’s Hair Health was a hair product sold from the late  1880’s through the early 1940’s. Advertisements during this period indicated that it was manufactured in the late 1800’s by the London Supply Company of New York and later by the Philo Hay Specialty Company of Newark, New Jersey.

Between 1890 and 1900 the London Supply Company was listed in the NYC Copartnership and Corporation Directories at 853 Broadway. The proprietor was Freeman Hiscox.  The company was no longer listed in the 1901 edition of the directory.

Around this time they apparently transitioned the operation to New Jersey. On July 3, 1900, the Philo-Hay Specialty Co. of Newark New Jersey incorporated with a capital of $210,000. Lawrence Hardham was their first president. Freeman Hiscox, the former proprietor of the London Supply Co., was Secretary and Alice L Ward was Treasurer. Philo-Hay Specialties Co. first appeared in the Newark City Directories in 1902 located at 229 Lafayette with Freeman Hiscox as manager.

The transition from the London Supply Company to the Philo-Hay Specialty Company apparently took several years. Although they were no longer listed in New York after 1900, some Hay’s Hair Health advertisements continued to reference the London Supply Co. at the 853 Broadway address up through 1904. Newspaper advertisements referencing the New Jersey company began to appear as early as November 1900.

The Philo-Hay Specialty Company remained at 229 Lafayette Street until 1906 when they were listed at 29 Congress. In 1908 their address was 30 Clinton and by 1913 their listed address was Verona Ave, corner of Clifton Ave. The business disappeared from the Newark Directories after 1922.

If you will stock and push Hays Hair Health, you will never be troubled with complaints from dissatisfied customers. The demand is always on the increase as our advertising runs continuously year after year in our ever increasing list of the best newspapers throughout the country. 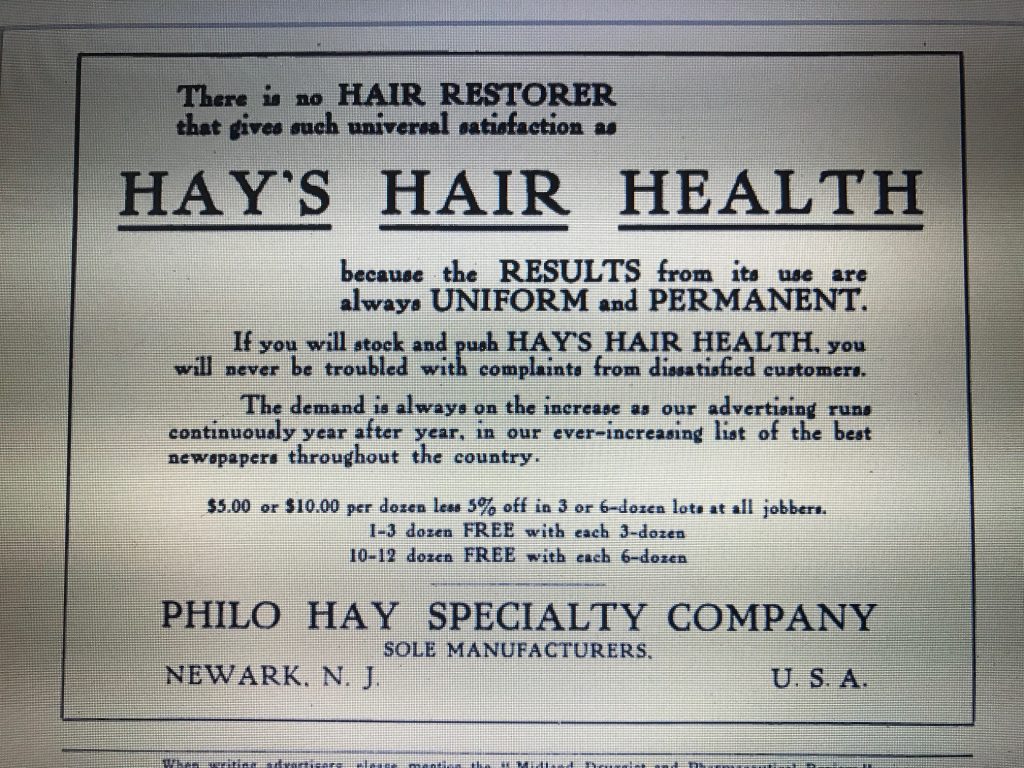 One early advertisement for Hay’s Hair Health printed in the January 5, 1901 edition of “The Literary Digest” delivered a message that is not very different from the one delivered today by the advertisers of both men’s and women’s hair products, though certainly not in the same words.

Gray hairs often stand in the way of advancement for both men and women, socially and in business. Many fail to secure good positions because they look “too old” and many women are disappointed in life because they fail to preserve that attractiveness which so largely depends on the hair.

The advertisement goes on to promote the purported benefits of the product:

Hay’s Hair Health will positively restore gray or faded hair to its former color and beauty. It is not a dye, nor a stain, but a natural restorer and tonic to beautiful hair growth. Equally good for men and women. 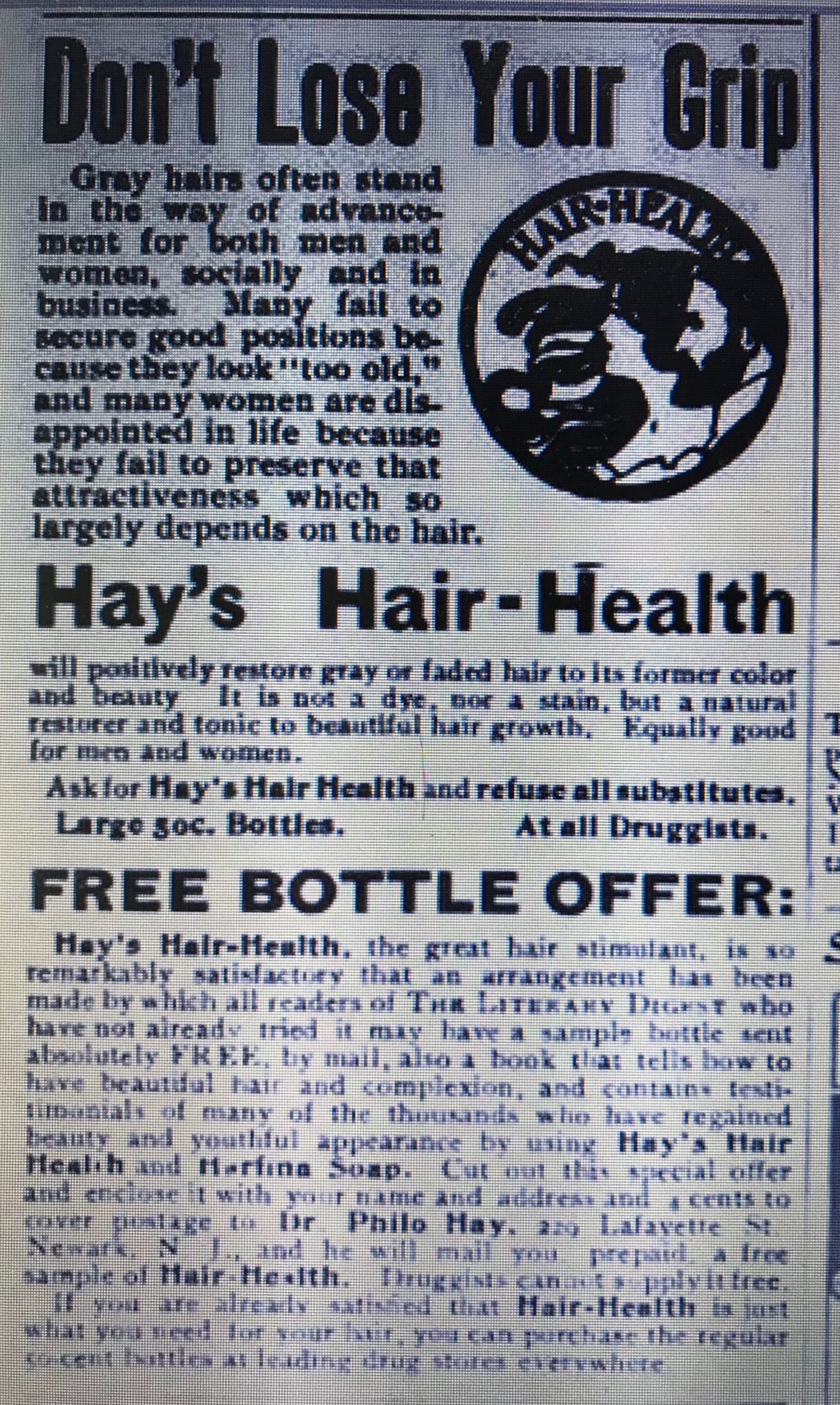 Another advertisement from the same era goes even further stating:

This hair food acts on the roots, giving them the required nourishment and positively produces luxuriant hair on bald heads.

An advertisement published in various forms between 1902 and 1915 used the slogan: “Hay’s Hair Health turns back time in its flight,” and actually included before and after illustrations. 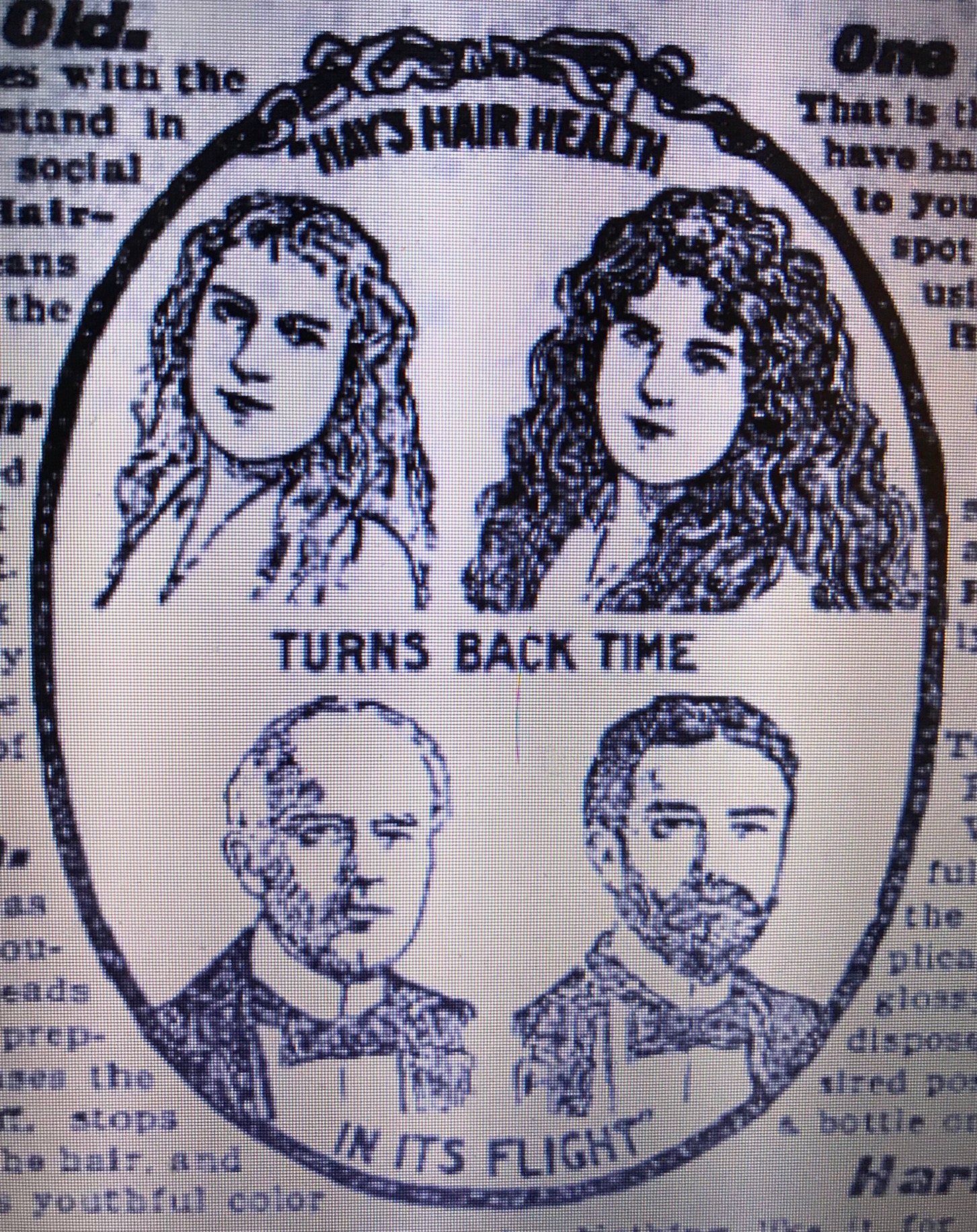 The product’s trademark which included the words “Hays Hair Health” with a picture of a woman with flowing hair and a bearded man all within a circle (no. 43022) was published by the U S Patent Office on August 9, 1910 but they were using it well before that. The phrase “Hay’s Hair Health” dates back to their earliest advertisements in 1889 and the picture described in the trademark is shown in the 1901 advertisement above.

Their bold advertising claims were not backed up by the scientific community. The 1916 Report of the Connecticut Experiment Station described Hay’s Hair Health as a colorless liquid containing a yellow percipitate and with the following odor of oil of bay. The product contained glycerine, free sulphur, lead acetate and organic matter, possibly sage. They stated that:

This is simply one of the glycerine water solutions of lead acetate with considerable free sulphur. The use of any preparation, even externally, containing such a dangerous poison as lead acetate is unsafe.

This combination is also sold under the false claim that it is a hair restorer. It is…a mixture of sugar, lead (1.5%), sulphur (1.5%), alcohol and water. The contents of a fifty cent bottle are worth but five.

After 1922, when the Philo Hay Specialty Company was no longer listed in the Newark directories, its not clear who manufactured Hay’s Hair Health but it continued to be named in drug store advertisements as late as 1942. This advertisement printed in the May 1, 1940 edition of the Buffalo (NY) Courier still advertised it in conjunction with Harifina Soap.

I found two identical mouth blown brown medicine bottles embossed Hay’s on one side and Hair Health on the other side. They match a labeled bottle included in a 1913 advertisement that included an offer for a free bottle.