After starting the business, Rose developed and patented a process that effectively prevented fermentation and preserved fruit juice without the need for alchohol. Prior to development of this process they preserved fruit juice by mixing in 15% rum. At about the same time, the Merchant Shipping Act of 1867 was passed making it compulsory for ships to carry limejuice to combat scurvy, which is caused by a deficiency of Vitamin C. As a result of these two factors, the company experienced a significant increase in demand for their product, fueling their growth.

An advertisement for L Rose & Co’s Patent Preserved West India Lime Juice and Cordial appears in the Central Advertiser of the March 7, 1868 issue of The Lancet – A Journal of British and Foreign Medicine. It touts its medicinal properties as:

antiscorbutic, highly beneficial in Rheumatism, an excellent tonic, also a cooling drink for heat in blood and skin. Sold by grocers, wine and spirit merchants, confectioners and chemists.

Their unique bottle design that includes embossed lime leaves and fruit has been part of their packaging dating back to at least 1880. This is confirmed by the following advertisement contained in the Church of Englnd Temperance Chronical dated July 17, 1880.

Messrs. Rose & Co. as the original manufacturers and patentees of the lime juice beverages prepared from the West India lime fruit, now so favorably known as supplying delicious, wholesome beverages, highly medicinal, preserved without the aid of spirits, beg to caution buyers against the now numerous imitations of these beverages, more especially of their LimeJuice Cordial, by rectifiers, wine makers and others. As protection against such, Messrs. Rose & Co have adopted glass stoppered bottles engraved with the lime fruit as trade mark, specially manufactured for them, and registered, the labels also bearing the signature of the firm. Purchasers are respectfully requested to order Rose’s Lime Juice Cordial, and other beverages noted below (Rose’s Limetta Ginger Cordial and Rose’s Prepared Lime Juice) to protect themselves further against such imitations.

The advertisement goes on to tout the following four products:

Rose’s Lime Juice Cordial – In water, or in soda, potass and other aerated waters, supplies a delicious beverage, effectually quenching thirst, cooling and refreshing the system. It will be found particularly agreeable blended with spirits, supplying a delicious stimulant, equaling the finest liqueurs, sustaining and invigorating; also forming an excellent substitute for the lemon as a flavoring in hot drinks, etc.

Rose’s Limetta Ginger Cordial – Is another form of the limejuice cordial, combined with ginger. Supplies an excellent stomachic. May be drank alone or in water or blended with spirits. As a drink for the cold season, it will be found particularly agreeable in hot water.

Rose’s Prepared Lime Juice – Is the refined juice of the lime fruit. It is used for the same purposes as the lemon, to which it is much superior as a medicinal agent, and its acidity considered more agreeable.

Rose’s Lime Juice Champagne – This agreeable sparkling wine, free from spirit, and retaining all the valuable medicinal properties of the lime fruit, has attained a high position in public estimation, and is highly recommended for its wholesome and medicinal properties. Furnishing a delightful and refreshing draught, it is particularly adapted for the ballroom, soiree and evening parties. In Champagne bottles, quarts and pints. 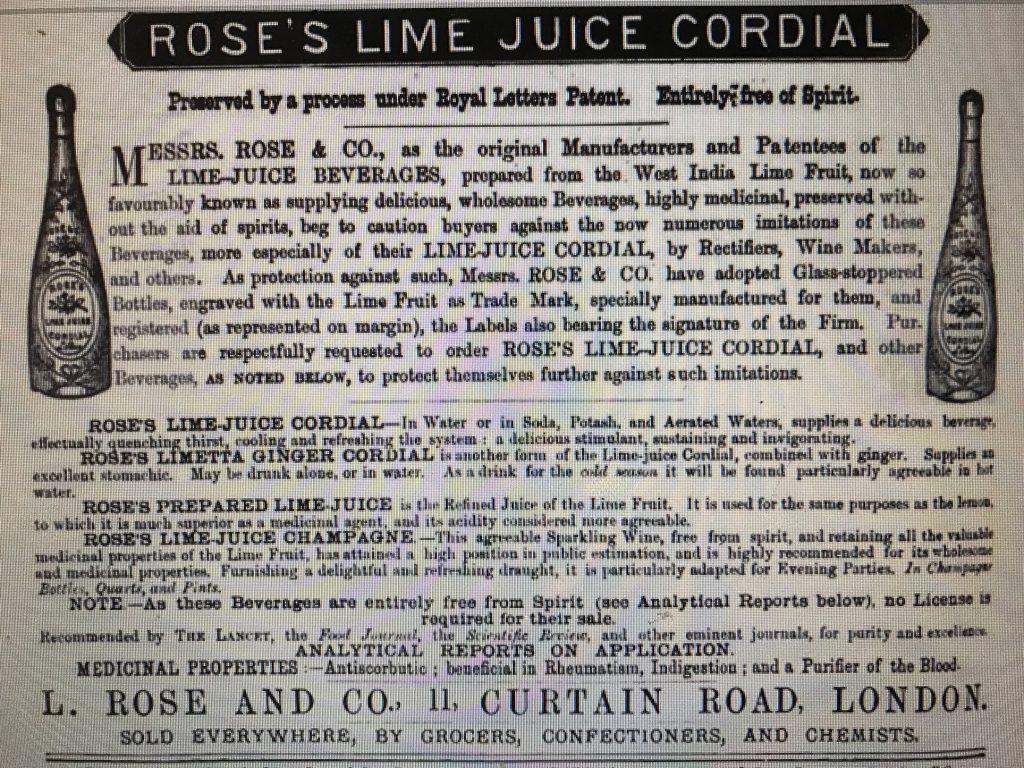 In 1891 the Company bought the Bath and Eishall Estates in Dominica and adapted an old sugar factory to the processing of limes. Fresh limes were annually shipped to North America while lime juice arrived in the U.S. from the U.K. In the 1920’s L Rose & Co was the main buyer of limes from across the island. Later, in the 1940’s the company also became known for its lime marmalade.

According to the 1884 edition of “NY’s Greatest Industries – It’s Leading Merchants and Manufacturers” W. Fleming & Co. first introduced L. Rose & Co.s lime juice into the U.S. in 1868.  Founded in 1864, W. Fleming & Co were importers of fancy groceries and, according to this advertisement printed in the June 26, 1875 edition of the Brooklyn Daily Eagle, were the sole U.S. agent for several L Rose products, including Rose’s Lime Juice, Lime Juice Cordial and Lime Juice Champagne.

The advertisement listed W. Fleming Co.’s address as 87 Warren Street and  65 Murray Street. Sometime around 1876 they moved to Reade Street and later Duane Street where they were located at several addresses between 1876 and 1905. The company was indicated as “dissolved” in the 1906 NYC Copartnership and Corporation Directory. It’s not clear if W. Fleming & Co. acted as Rose’s agent up until 1906 or who their U.S. agent was afterwards.

Schwepps acquired L Rose & Co in 1957 and through a series of acquisitions Rose’s Lime Juice, as well as other products under the Rose label, are stilll made today by the “Dr. Pepper Snapple Group”

The bottle I found is mouth blown, roughly 6 to 8 ounces and is embossed with the L. Rose & Co. name as well as the trade-mark lime leaves and fruit. It probably held either the lime juice or one of the cordials.