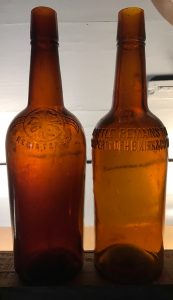 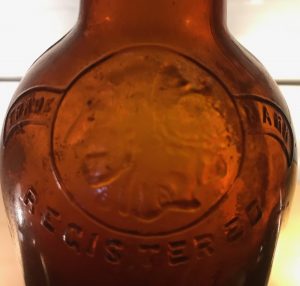 The H stands for Harford B Kirk. The company was a well-known and respected bottler of wines and liquors that was in business for just about 70 years. An early company advertisement in 1860 mentioned Osborn’s Port, Chillingworth’s Port, Brandies, Sherries and Madeiras, Champagne, Rums, Gins, Scotch and Irish Whiskeys as well as ales and porters.

The following article in the January 1, 1886 issue of the New York Times provides some basic information on the company.

Among the old established firms in New York distinguished for handling reliable goods of the very highest standard is the firm of H B Kirk & Co., whose establishments at No. 69 Fulton Street, the corner of Broadway and Twenty-seventh Street and No. 9 Warren Street are well known and largely patronized. The firm’s specialties consist of the well known Kentucky sour mash whiskies such as “Hermitage,” (both rye and bourbon) “Oscar Pepper,” “Old Crow” rye, of the latter of which H B Kirk & Co have taken the entire production for the last 14 years. They are also the sole agents for the productions of the Pleasant Valley Wine Company, which are known in all the markets of the world as strictly pure and reliable. The business was established in 1852.

The NYC Directories back up and ultimately finish much of the story. Harford Kirk, wines, was first listed individually around 1855 / 1856 and HB Kirk and Co was first listed around 1864 /1865. The business remained listed into the mid- 1920’s. After the start of National Prohibition the business was listed as liquors for non-beverage purposes (whatever that means?). I don’t see any advertisements for them during this period so I doubt they were very active if at all.

As the above story points out, H.B, Kirk was the exclusive bottler of Old Crow Rye. The two firms partnered from the early 1870’s up until the start of National Prohibition in 1919 and Old Crow Rye was considered Kirk’s signature product. The relationship between the two firms is described in the December 17,1905 edition of the New York Times.

Pretty much every New Yorker who uses whiskey at all has sampled “Old Crow Rye” either at its home, H.B.Kirk & Co.’s famous old place on Broadway and Twenty-seventh Street, or at the homes of his friends. But of this number probably very few know the history of this sterling and time-tried brand, which for many years has stood at the top of all Rye whiskeys.

The origin of “Old Crow” dates back to the early thirties of the last century, when James Crow, a noted chemist of that period, settled in Kentucky and applied his knowledge to the distilling of Whiskey. His success was so pronounced that the product of his still became known not only in this country, but abroad, as the best. At the death of James Crow in 1856, W.A. Gaines & Co. secured from his heirs the secret of his great success as a distiller, and have continued the distilling of “Old Crow” in the same manner that was laid down by James Crow, not attempting to improve on his methods, as the results were perfection in whiskey.

In 1872, 19 years after his business was established, Mr. H.B. Kirk placed a sample order of 200 barrels with W.A. Gaines & Co. When it came to maturity, Mr. Kirk was delighted with its quality, and placed a large order, entering into a formal contract to take the entire output of the Old Crow Rye distillery. From that day on, the output of the distillery has been increased from year to year, going , as agreed under the contract, exclusively to H.B. Kirk & Co., who are the sole bottlers and distributor of same. In addition to their free bottling at No. 156 Franklin St., New York, they are bottling in bond under the Government supervision at the bonded warehouses in Kentucky. The steady and ever increasing demand for “Old Crow Rye” is a source of great satisfaction to H.B. Kirk & Co., proving that the method adopted at the origin of the company in 1852, and strictly adhered to, of giving the very best that could be produced meets with the public’s approval and secures their patronage.

“Old Crow Rye” is sold in bottles only. If offered over any other name than that of H.B. Kirk & Co., it is a fraud.

The advertisements for Old Crow Rye were at times quite humorous. One, in 1897, called it “the Washington of Whiskies.”

Like the father of our country our Old Crow Rye is honest truthful and always reliable.

We see by the papers that a Mr. Lynch has just died in Muncie Ind., at the early age of 120 years, and who for many years took in heavy jags of Old Crow Rye. He was in hard luck. We hope his premature demise will not deter others from using it. 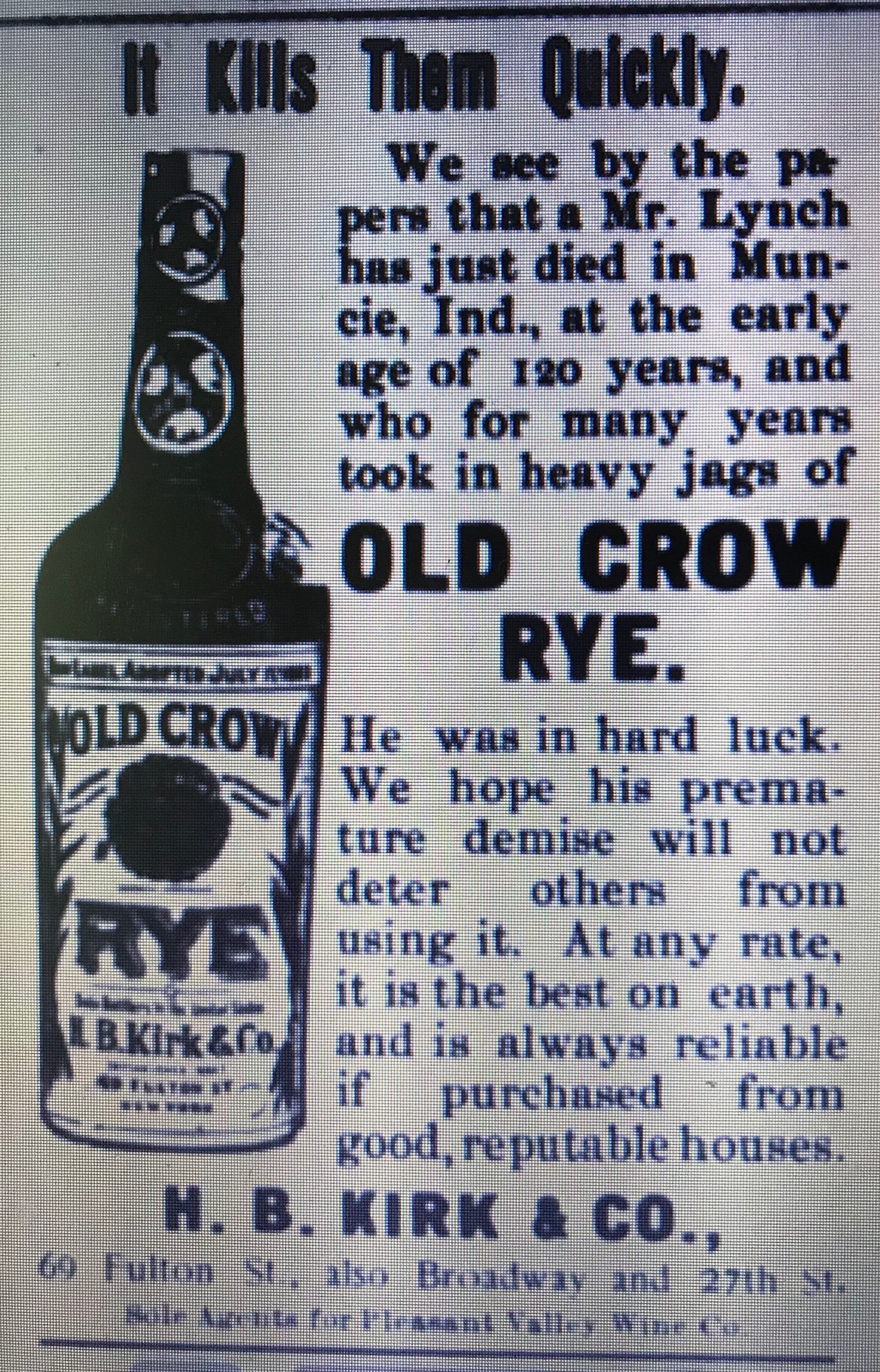 On a final note, in 1918 as the government was getting ready to enact National Prohibition and basically shut them down, H.B. Kirk still contributed advertising space to support the war effort. 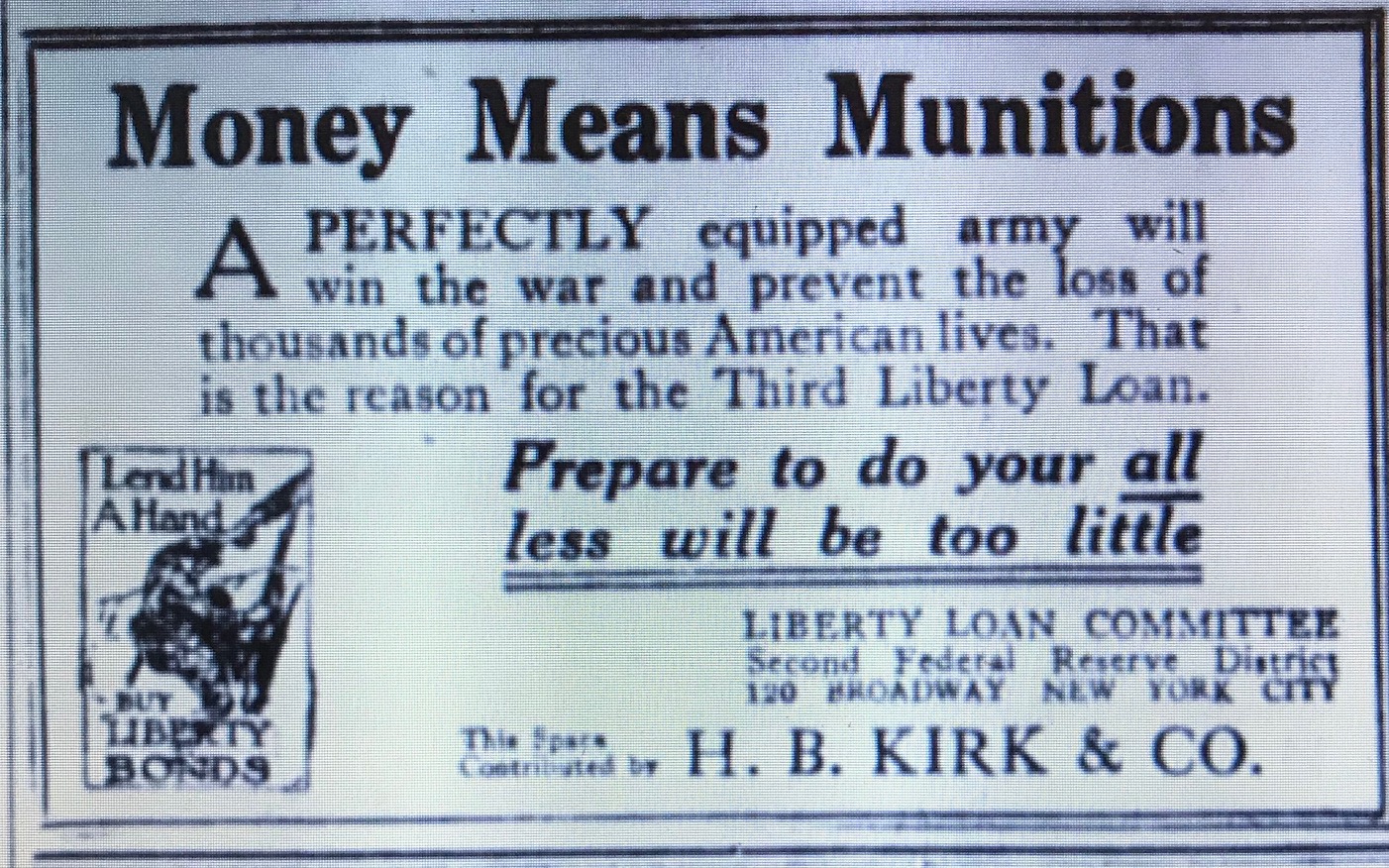 I found two identical bottles embossed “Bottle Remains the Property of H B Kirk & Co NY”. On the opposite side there’s an embossed insignia consisting of what looks like three faces. Most likely, they contained “Old Crow” Rye.