VER-VAC was the first cola concentrate made by the H R Nicholson Co. of Baltimore Maryland.

They first appear in the Baltimore directories in 1917, listed as the Ver-Vac Company, Roy T McFadden and Geo Murphy props, soda water, 111 s Gay. It looks like the H.R. Nicholson Co. got involved soon after. In the 1918 directory Frank A. Hyde, the secretary-treasurer of Nicholson is listed with The Ver-Vac Co., and McFadden and Murphy are not.

The following information on VER-VAC came from “The House of Quality: The History of the H R Nicholson Co.” by Harry R. Nicholson as summarized by the web site Five Star Soda.com. It confirms the H.R. Nicholson Co.’s involvement.

Nicholson developed and invested in VER-VAC, a cola designed to compete with Coca Cola. It’s growth was hindered by increased sugar prices and sugar rationing associated with World War I. The amount of sugar businesses were allotted was based on their usage prior to rationing and since Ver-Vac was a relatively new venture, Nicholson didn’t get enough to run the business. As a result, the company went flat around this time.

VER-VAC apparently survived World War I and incorporated in late 1919. The December 30, 1919 issue of the Chemical Color and Oil Daily stated:

Several months later, in April of 1920, the VER-VAC Company advertised a public offering for 40,000 shares of stock. The documents associated with that offering provided an overview of the business at that time.

The VER-VAC Company of Baltimore was organized in the Fall of 1919 for the purpose of manufacturing the soft drink known as “VER-VAC.”

VER-VAC is a non-alcoholic beverage, distinctive, refreshing, pleasant in taste and non-injurious. It is the result of years of effort and is today recognized by numerous bottlers and others familiar with its quality as being the most palatable cola drink on the market and since it has been offered the public, has met with instant success and popular approval.

VER-VAC is distributed by bottlers only under the name of VER-VAC and it is the intention of the VER-VAC Company that all bottling concerns having the exclusive distribution, will be known as the VER-VAC BOTTLING COMPANY of their respective localities.

The Company’s plant is located at 111 South Gay St., Baltimore, Md., and occupies the entire warehouse with floor space of over 12,000 square feet.

The plant is fully equipped with new and modern machinery for the manufacture of VER-VAC Syrup. The entire equipment is glass-lined throughout, of the most sanitary type, the system installed enabling the company to start its raw materials on the top floor of the building and gravitate through the various stages of manufacture to the first floor of the plant where it is ready for shipment, thereby reducing the cost of manufacturing to a minimum expense.

The present capacity of the plant is 750,000 gallons of finished VER-VAC Syrup annually and the demand for this beverage is far in excess of this capacity owing to the increasing demand for a good soft drink, particularly since prohibition has become effective.

The July 1920 issue of the Beverage Journal stated under “Maryland Notes” that “the Ver-Vac Bottling Co is now in operation, operating nine trucks in distributing Ver-Vac to the retail trade.

An advertisement in the May 15, 1921 issue of the Newport News, Va. Daily Press identified that area’s local bottler as Epstein Brothers. 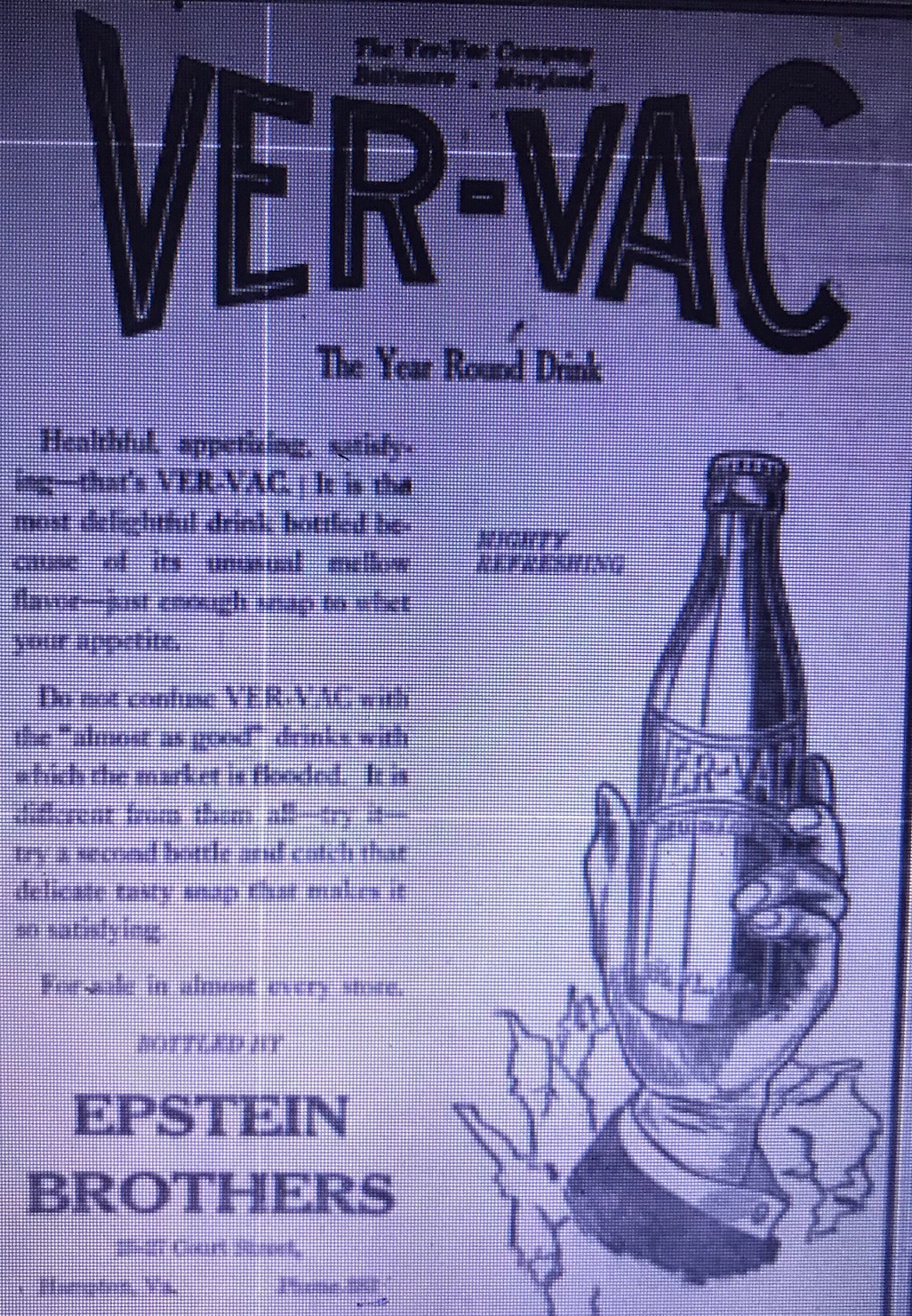 VER-VAC appears in the Baltimore directories through 1931 as the VER-VAC Products Co., listed as either syrups or extracts. They were always located at 111 s Gay. By the mid 1930’s they are no longer listed.

The one VER-VAC bottle I found is machine made and similar to the one in the Virginia advertisement. Near the base, it’s embossed “Ver-Vac Bottling Co. of New York.” I haven’t been able to find a listing for them or identify which company that was.