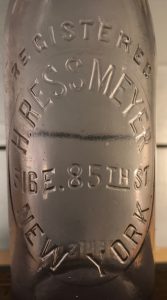 The H stands for Henry Ressmeyer.

In 1906, Ressmeyer was listed individually as a bottler located at 234 East 84th Street. At this point the firm of Evers and Ressmeyer is no longer listed so it looks like Evers and Ressmeyer went their separate ways. By 1909 Ressmeyer had moved to 514-516 East 85th Street where he remained listed as a bottler through at least 1933. Census records in 1910 through 1930 called him a beer bottler that owned his own shop, so apparently it was not a large operation.

It’s not clear when the business ended but I couldn’t find a listing for him in the 1940 census records.

The bottle has the 516 E 85th Street address embossed on it dating it no earlier than 1908-1909 when the business moved to that location. It’s a champagne style beer with a tooled blob finish so it wasn’t manufactured too long after the move.