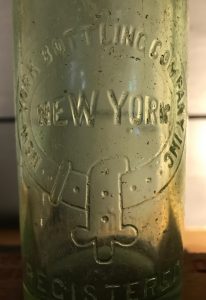 The New York Bottling Co., Inc was established in 1914. According to the January 15, 1915 Issue of the American Bottler:

Early Directories list the other members of the consolidation at the following addresses:

The bottle I found is machine made (9oz) with the “Inc” added to the Company name. This dates it no earlier than the 1914 consolidation.