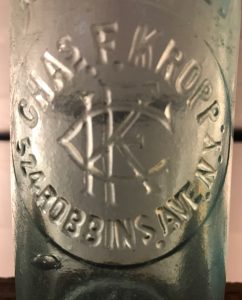 According to the 1900 census records, Charles F. Kropp immigrated to the United States from Germany in 1886. He was actively in business in the Bronx, New York from 1900 to 1912, initially as a brewer and later as a mineral water manufacturer.

Over the years, he was listed at the following locations:

Robbins Avenue has subsequently been renamed Jackson Avenue and 524 Jackson Avenue is a small one story structure that includes a garage door opening at street level. It looks too new to have been used by the Kropp business.

I’ve found a total of three bottles, all embossed with the Robbins Avenue address. Each of them has a tooled crown finish and fits the 1905 to 1912 time frame when Kropp was at that address. They are 8 oz so I’m guessing they contained mineral water as opposed to beer. This probably puts them at the later end of the time frame.