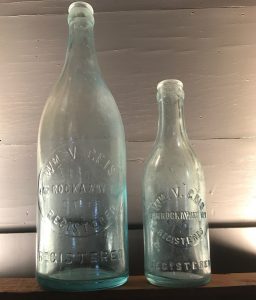 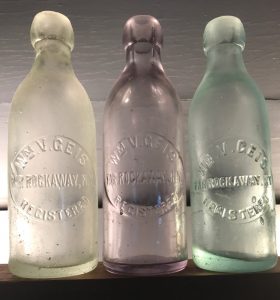 The March 3, 1899 issue of the Brooklyn Daily Eagle announced the formation of a new corporation called Kirkman, Rae & Geis. William V. Geis was named as one of the three principals.

Walter B. Kirkman, Albert F. Rae of Far Rockaway, and William V. Geis of 218 East One Hundred and Twenty Fourth Street, Manhattan, have associated together under the incorporated name of Kirkman, Rae & Geis for the manufacture of mineral waters and other similar beverages. The capital stock is $7,500 and its principal place of business will be at far Rockaway.

The 1899 Trow Business Directory of the Borough of Queens listed the business of Kirkman, Rae & Geis in Far Rockaway at William n Crescent, Far Rockaway, under both ‘bottlers” and “manufacturers of mineral water” headings. Subsequently, the 1903, 1907, 1908-1909 and 1912 Trow Business Directories of the Borough of Queens all listed Wm V. Geis at the same location. Based on these records, I’m guessing Geis bought out Kirkman and Rae and became a sole proprietor sometime between 1899 and 1901.

In addition to mineral water, Geis also bottled beer, apparently acting as an agent and bottler for Pabst. He placed an advertisement in the “Wave of Long Island”, a weekly newspaper for delivery of two-dozen bottles of Pabst for $1.25. The advertisements were found in the Sept 7, 1901 and July 5, 1902 issues. 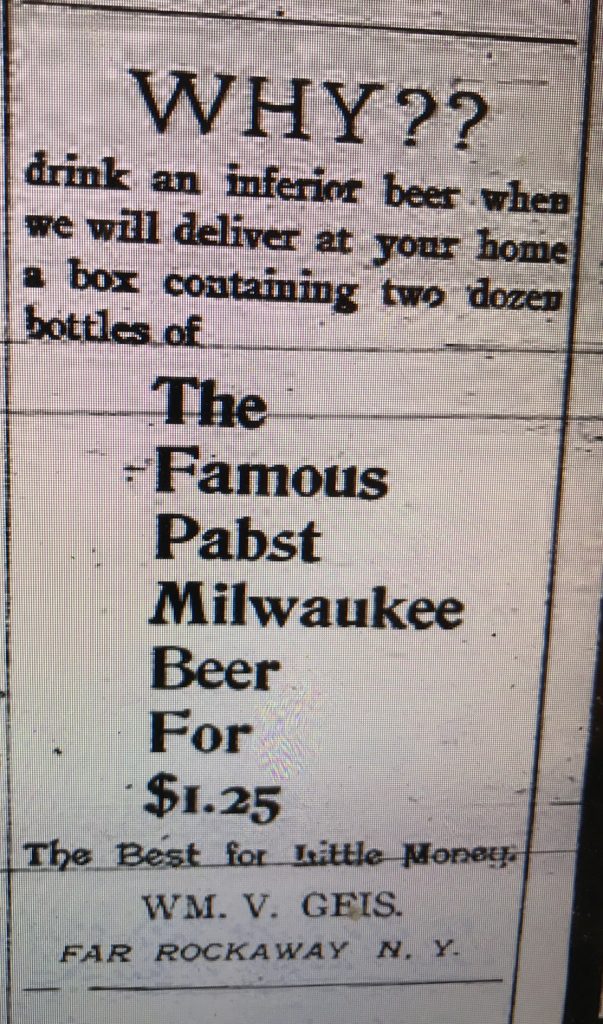 In 1909, Geis joined with Sidney Jackier forming the Geis-Jackier Company. An item in the November 27, 1909 issue of the Brooklyn Daily Eagle reported:

Articles of incorporation of the Geis-Jackier Company of the Borough of Queens have been filed with the State Department. The capital is $10,000. The directors are Sidney Jackier, William V. Geis, Hattie Jackier and Elsie C. Geis of Far Rockaway.

Sidney Jackier had signed a five year lease to operate the Haffner Neptune Park Hotel in August of 1909, two months prior to incorporating Geis-Jackier. I suspect that the business served as the bottling and catering operation for the hotel.

Geis-Jackier was named as a Far Rockaway bottler in a listing of Long Island Industrial Establishments contained in the September 8, 1910 issue of The Brooklyn Daily Eagle and they were listed in the Brooklyn and Queens section of the NY Telephone Book in 1910, 1914 and 1915 (the only editions I could find).

It’s possible that both Wm V. Geis and Geis-Jackier operated out of the same location. Geis-Jackier’s listed address was Crescent Opposite William while Wm V. Geis listed their address as William near Crescent.

Geis-Jackier only stayed in business until 1913 or 1914. According to a story in the October 23, 1915 issue of the Brooklyn Daily Eagle, Jackier gave up the lease for the hotel after four years and had been declared bankrupt. Coincidently, the last listing I can find for Wm V. Geis is in the 1912 Trow Business Directory.

By the late teens Geis had become the proprietor of the Hewlett Inn on Long Island.

He was no longer listed in the Queens telephone books by 1914 so I’m guessing that he moved to Long Island and became associated with the Inn around the time that the Geis-Jackier business came to an end. I haven’t seen a Geis bottle with “Hewlett” embossing so I have to think he was out of the bottling business by this time.

He remained with the Hewlett Inn until his tragic accidental death in 1921. According to a story in the October 15, 1921 issue of the N.Y. Times he died in an accidental shooting.

While preparing to start on a hunting trip in the Adirondacks early yesterday morning, William V. Geis, proprietor of the Hewlett Inn at Hewlett, L.I., was accidentally shot by Paul Weidman of Woodmere, L.I., one of three friends who were to have accompanied him. Geis was rushed to St. Joseph’s Hospital at Far Rockaway, where he died several hours later. When dying he made a statement to Justice of the Peace Raisig exonerating Weldman from all blame.

Weidman, dazed from what had just occurred, ran from the house after the shooting, muttering that if his friend died he would end his own life. Up until late last night Weidman, who is a prosperous bus owner, had not returned home and his family were apprehensive. Mrs. Elsie Geis, widow of the dead man, also exonerated Weidman.

Sheriff Charles Smith, after an investigation, said he was entirely satisfied that the gun had been accidentally discharged by Weidman during an exhibition as to how he would handle a hold-up man if the occasion arose.

Whatever became of Paul Weidman is unknown.

I’ve found varying type bottles, including tooled blob tops (8oz), tooled crowns (8, 12 and 28 oz) and machine made crowns (8 and 28 oz). The 12 oz bottles were brown…maybe containing the Pabst Blue Ribbon mentioned in the advertisement? All others are aqua. The pictures show an assortment of mouth blown bottles. All are embossed Far Rockaway.