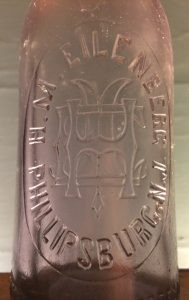 According to his obituary, published in the December 29, 1922 issue of the Plainfield Courier News, John Eilenberg was a long time resident of Phillipsburg.

Mr. Eilenberg was born in Sussex County and went to the schools there. He started to work as a telegraph operator for the Central Railroad of New Jersey. He moved from Philadelphia to Phillipsburg in 1860, and has lived there since. He was a wholesale liquor dealer until twenty-one years ago. He was one of the oldest active building and loan officials, having been for fifty-one years secretary of the Building and Loan Association No. 5 of Phillipsburg. He held the position until his death.

As president of the town council and a member of that body for a number of years Mr. Eilenberg was identified with many activities here.

Based on the directory information that I could find the business was located at 533 South Main up until at least 1894. One directory, “The Warren County History and Directory or the Farmer’s Manual and Business Men’s Guide – 1886” contained a printed advertisement.

Sometime between 1894 and 1898 the business moved to 362 South Main. In the 1906 and 1908 Directories, John’s son, Henry M Eilenberg was listed as a wholesale liquor dealer at the same location. Presumably Henry took over the business in 1901 if the information in the obituary is correct.

Around this time an item in a local publication referred to the business as: H M Eilenberg, Bartholomay’s Beer, S Main St in Phillipsburg. Based on this it looks like the business served as the beer company’s local agent and bottler for a while.

In the 1910 directory, the business was no longer mentioned and Henry’s occupation was listed as a machinist.

The 525 S Main Street address is currently a vacant lot. 362 South Main is an older three story apartment building with commercial stores at street level and could date back to the business.

The bottle I found is 8 oz and embossed “H.M. Eilenberg. It looks like a soda water although I guess it could have contained Bartholomay beer. It’s a tooled crown so it fits within the time frame that John’s son Henry ran the business.