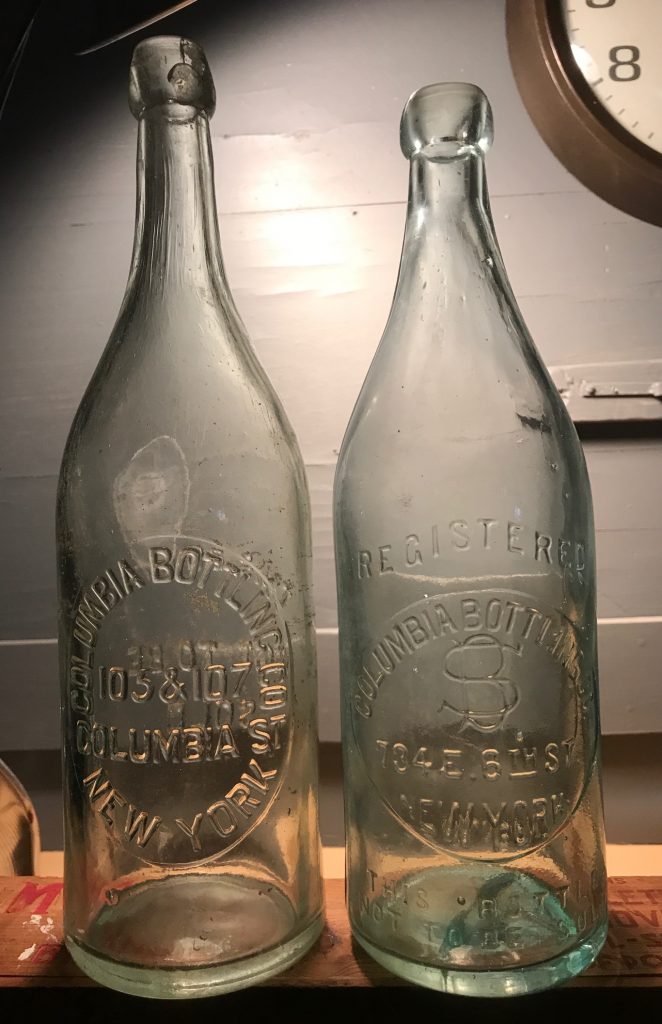 The proprietor of the Columbia Bottling Company, Bernard (sometimes Barnett) Sandrowitz was listed in the 1897 and 1898 Trow NYC Business Directory under “mineral water” at 330 Stanton Street.

The Columbia Bottling Company was first listed in the 1900 NYC Corporation and Copartnership Directory at 330 Stanton Street . They also appear in the 1901 New York State Factory Inspection Report with 8 employees. In 1902 the company moved to 734 East 6th Street and remained listed there through 1909 with Bernard Sandrowitz as proprietor.

The January 15, 1909 issue of the “American Bottler” announced that the business had incorporated.

The incorporation is announced of the Columbia Bottling Co 734 East 6th Street New York to bottle water and beverages: capital $ 5,000. The incorporators are: Harry Schiffman No 135 E 115th St, Leon Katz No 1461 Fifth Avenue, Samuel Slonim No 1590 Lexington Ave, all of New York.

In 1910 the business changed their name in the directories to the Columbia Bottling Works but remained at the 734 East 6th Street location. Sandrowitz continued to be listed with the company in the Copartnership and Corporation Directories  so I assume that he continued to run/manage the business.

The company apparently went out of business in 1914. The 1914 directory stated that the company name had been discontinued.

In the 1915 NYC General Directory, Sandrowitz was still living at the East 6th Street location but was employed as a foreman at the Columbia Soda Water Works, located at 375 East 4th Street. Adolph Goldstein was listed as both president and vice president of the company and Frances Sandrowitz (probably a relative) was secretary/treasurer. By 1920, this company was not listed either.

I’ve found two Columbia Bottling Company bottles. One is embossed Columbia Bottling Co with an address of 105 & 107 Columbia Street. This is the same block as 330 Stanton Street, so it looks like the business was located on the northwest corner of Stanton and Columbia. Recognizing that the business moved to 6th Street in 1902, this bottle dates between 1900 and 1901 or possibly a couple of years earlier depending on when Sandrowitz started using the Columbia name. The bottle is quart sized (27 or 28 oz) with an applied blob finish.

The other bottle is embossed with the 724 East 6th Street address, so it probably dates between 1902 and 1909, before they started calling themselves the Columbia Bottling Works, but certainly no later than 1914. The bottle also has the monogrammed initials “BS” embossed on it which must stand for Bernard Sandrowitz. The bottle is also quart sized (27 oz) with a tooled blob finish. 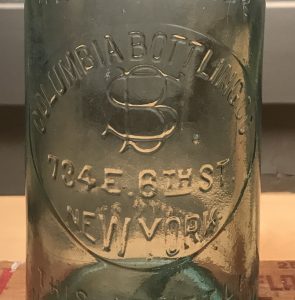 I’ve also seen bottles on the internet embossed Columbia Bottling Co with a Harrison St address in Brooklyn. Their Bottle Registration Notice, printed in the February 18, 1898 issue of the Brooklyn Daily Eagle stated that they had been in business since 1896 and that they maintained addresses at 117 Columbia Street and 36 Harrison Street in Brooklyn. They were owned and operated by Eugene R Judge. I can’t find any connection between the two companies.