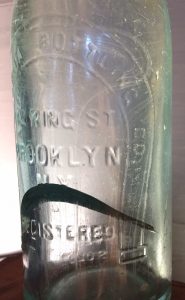 The first listing I can find for the California Bottling Co. was in the 1922 Copartnership and Corporation Directory for the Boroughs of Brooklyn and Queens however, based on the patent application below it appears that the business started around 1920. This is confirmed in a June 10, 1920 article in the Brooklyn Daily Eagle that described an accident involving a truck owned by the California Bottling Co. The business continued to be listed in various Brooklyn Directories up to and including 1931.

According to 1922 issues of the “Beverage Journal” and the “Soda Fountain” under the heading “soft drinks and syrups” the California Bottling Co patented the design and the word “click” for non-alcoholic, non-cereal, maltless beverages sold as soft drinks and syrups for making same. Used since: February 1, 1920, Filed: February 28, 1922, Published: July 18, 1922 and Registered: October 17, 1922.

Starting in the mid-1920’s through 1931, the Click Cola Bottling Company was listed in various directories with the same address and telephone number as the California Bottling Co.

I’ve seen bottles on the Internet embossed Click Cola (in script) Bottling Co., with the 142 King Street address looking very much like a classic Coca-Cola bottle. An Internet bottle site stated that Coke sued them for infringement and put them out of business. I can’t confirm this.

Today 142 King Street is a one story building with two garage door size openings. Property Shark.com states that it was built in 1931 so it was most likely not utilized by the business.

The bottle I found is machine made (8 oz) with California Bottling Co embossed inside a large horseshoe. There is no mention of “Click” Cola. It fits with a mid 1920’s time frame.