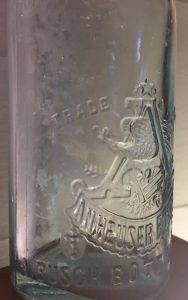 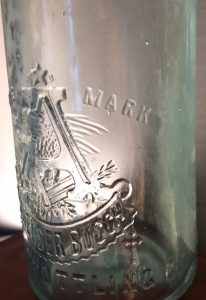 The company started on June 7, 1897 when the Thimig Bottling Company officially changed it’s name to the A Busch Bottling Company. I have to assume that Anheuser-Busch had purchased Thimig around that time.

A notice announcing the proposed name change was printed in the May 5, 1897 issue of the Brooklyn Daily Eagle. 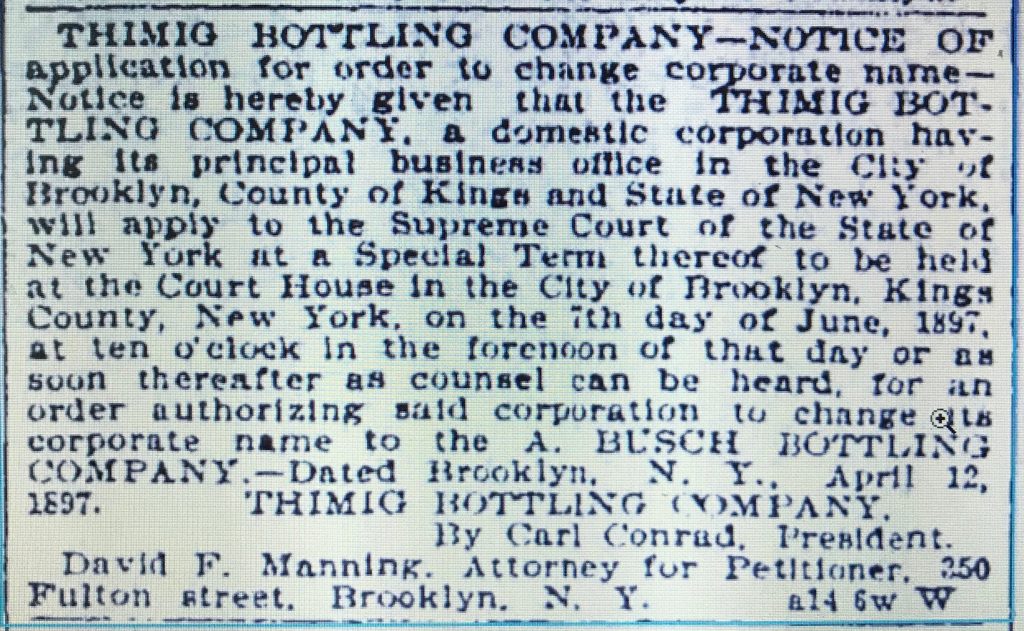 Prior to that, Anheuser-Busch had used local distributors to bottle and sell their product in New York and the Thimig Bottling Company was one of those distributors.

Thimig’s relationship with Anheuser-Busch dated back to at least 1884. An advertisement that year in the April 26 issue of the Brooklyn Daily Eagle listed Anheuser-Busch as one of the beers they sold on draught and in bottles. 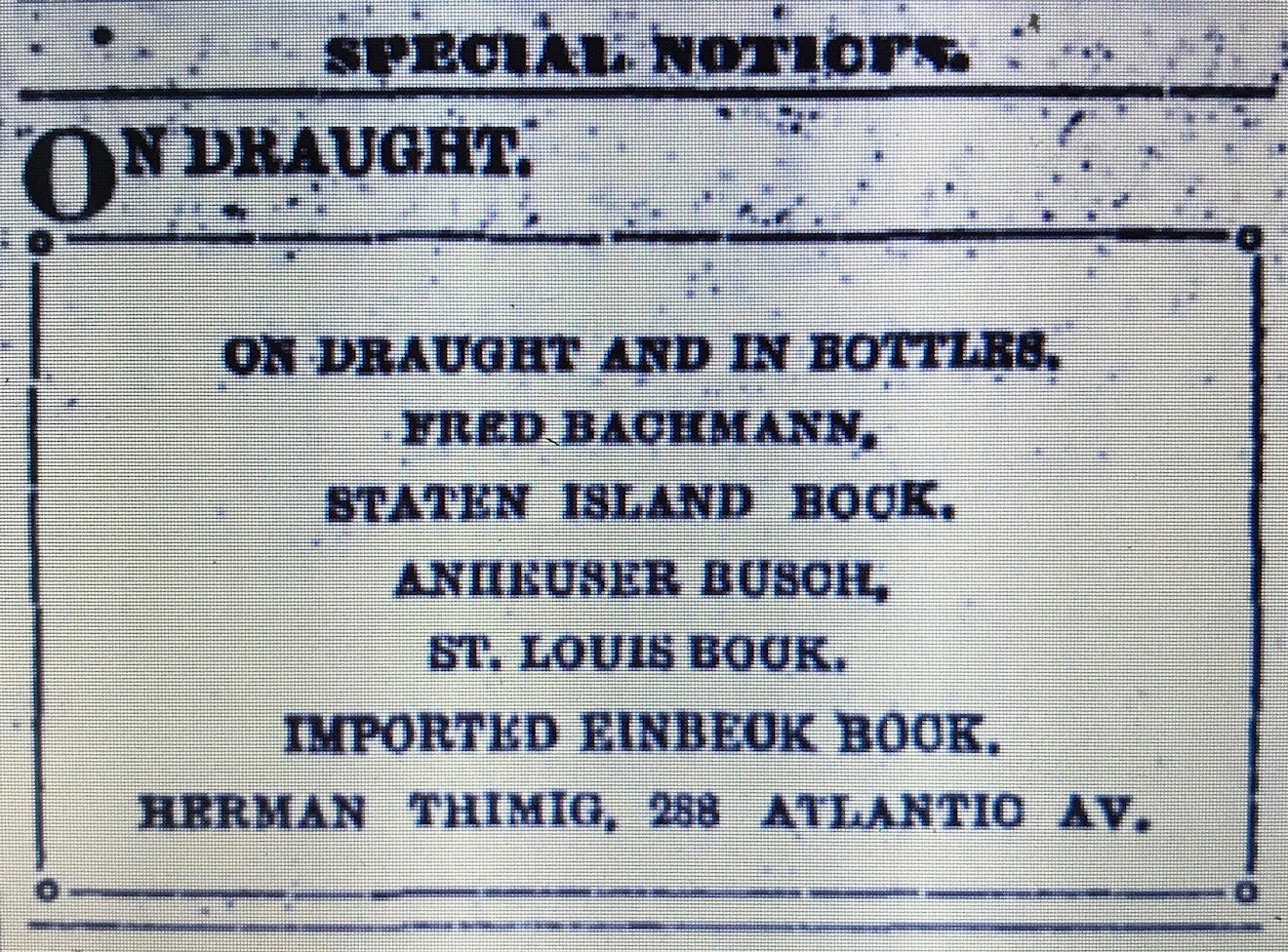 Then in a May 18, 1890 advertisement Thimig was named as their sole agent and bottler (I assume for the City of Brooklyn). 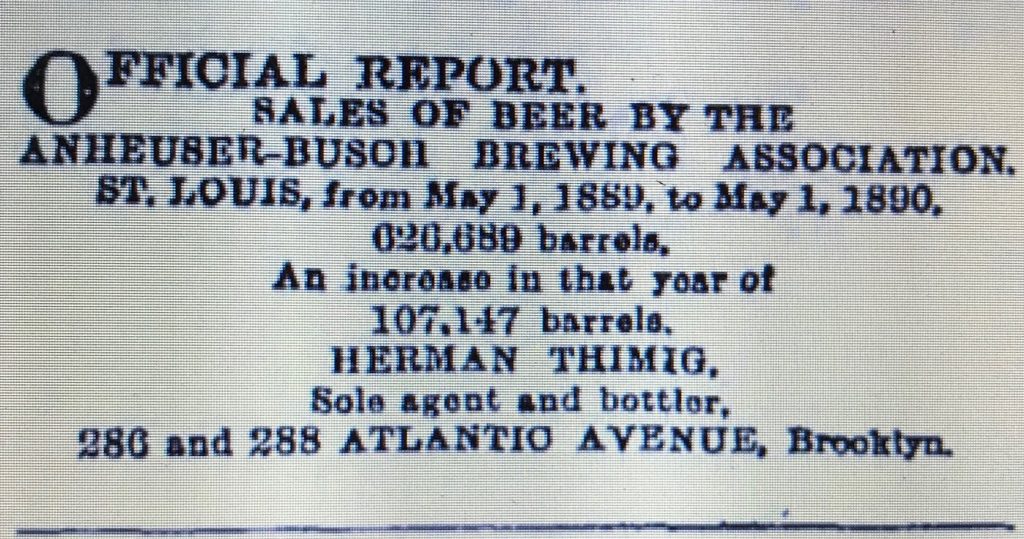 The first mention of the A Busch Bottling Co in the NYC Directories that I could find was in the 1899 Trow Business Directory of Brooklyn at 433-435 Atlantic Avenue, the former address of the Thimig Bottling Company. A year prior, Alfred Busch was listed in the 1898 General Directory at that address.

The A Busch Bottling Co continued to be listed in all of the Brooklyn City Directories and Telephone Directories I could find between 1902 and 1917 at 433-435 Atlantic Avenue. The 1913-1914 Copartnership and Corporation Directory for Brooklyn and Queens listed the Business as a NY Corporation with E A Faust as President; J Alfred Piper as Vice Pesident and H P Hof as Secretary and Treasurer.

Around the time the A Busch Bottling Company was established they were bottling several different Anheuser-Busch brands. An advertising item in the October 11, 1900 issue of the Brooklyn Daily Eagle named them as wholesale dealers for the following bottled beers: Budweiser, Faust, Black & Tan, Anheuser Standard, Export Pale, Exquisite and Pale Lager.

Other advertisements in that time frame mentioned Michelob as well.

Another product they distributed early on was a tonic called “Malt-Nutrine, the helpful food drink to promote appetite, restore health, build body and brain.” 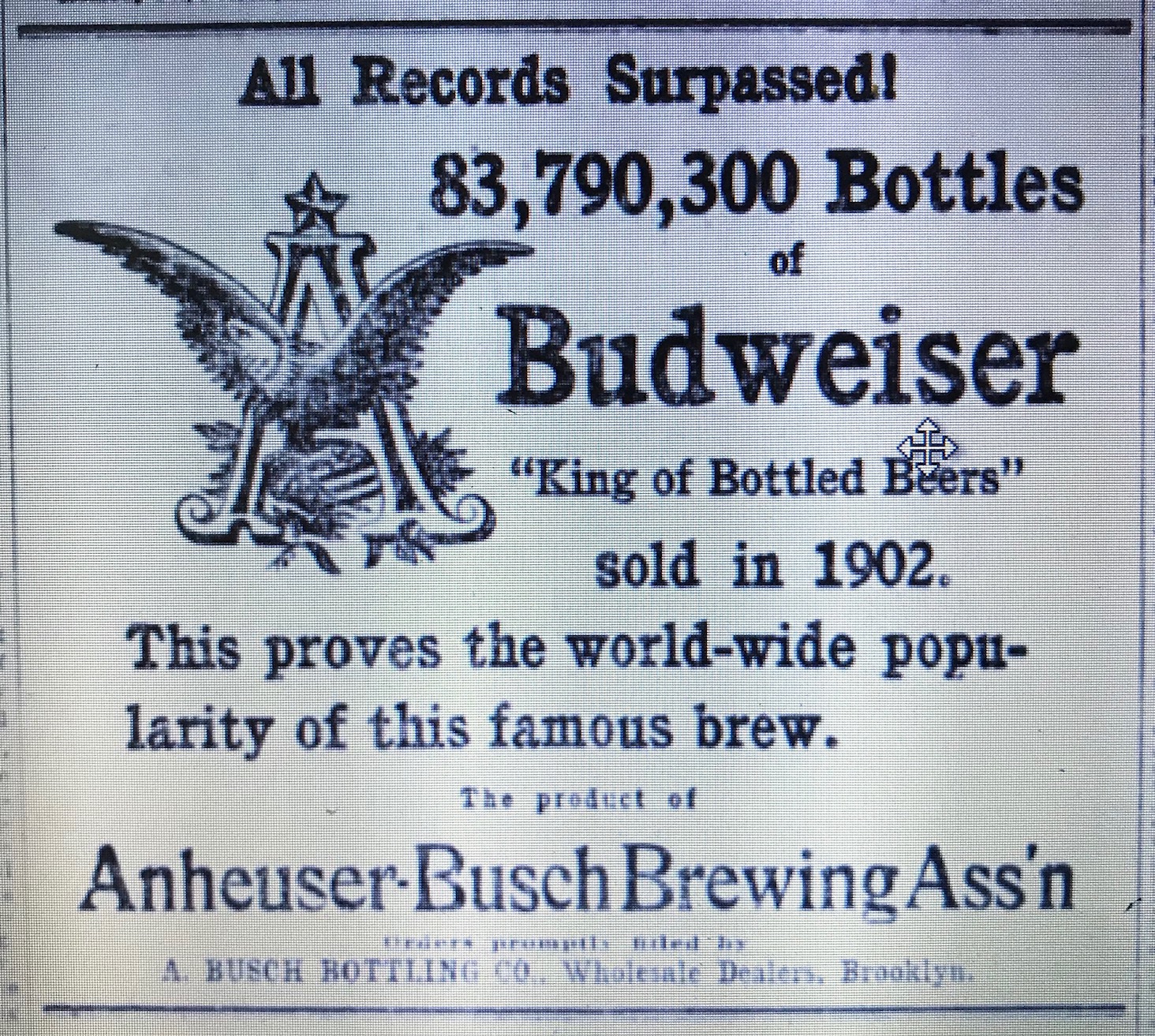 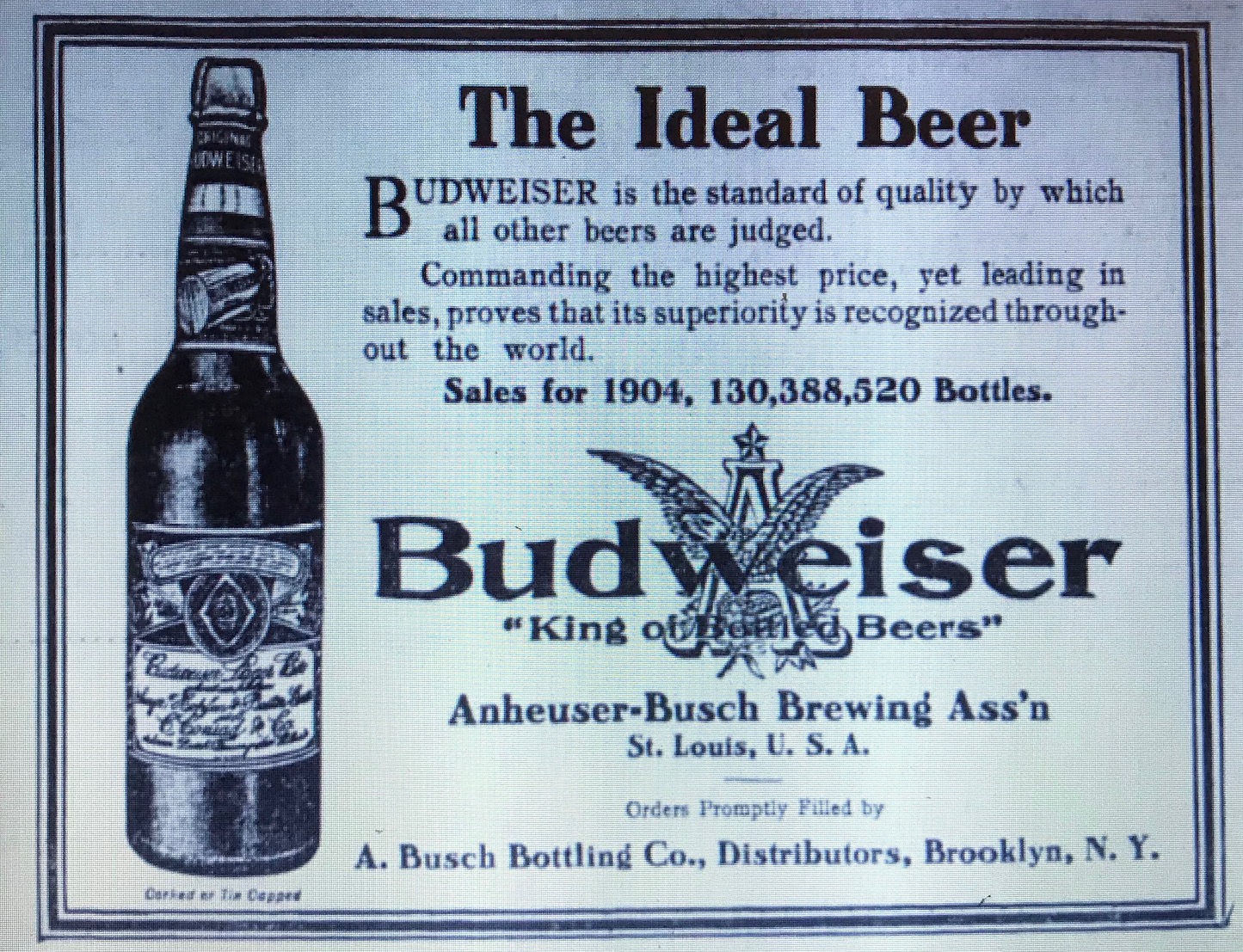 The A Busch Bottling Company was not listed in the 1922 Copartnership and Corporation Directory for Brooklyn and Queens so it appears that they did not survive even the beginning of National Prohibition. Anheuser-Busch was still marketing products in New York at that time, including a tonic version of Budweiser and Anheuser Busch Ginger Ale, but in early 1920’s advertisements they listed the Anheuser-Busch Ice & Cold Storage Co., Inc. as their distributor. An advertisement from July 1, 1924 listed that company’s address as 48 Warren Street in Brooklyn. Other advertisements also listed a 166th Street address in NYC. 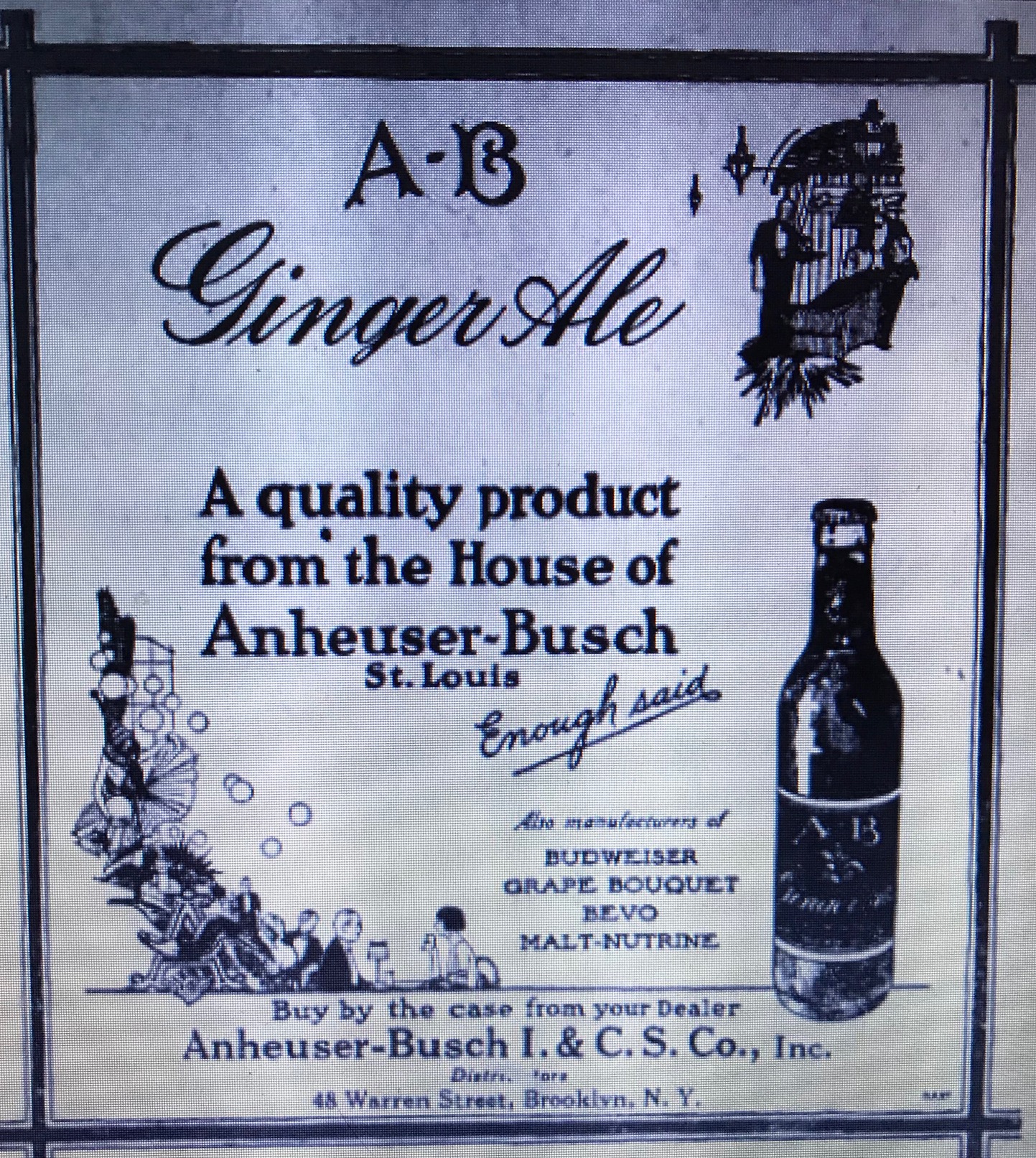 Later, Anheuser-Busch listed Anheuser-Busch Inc. at 515 West 16th Street as their distributor for their “Budweiser Barley Malt Syrup.” that was first marketed in 1926. According to a June 1933 advertisement, that location was serving as the Anheuser Busch-New York Branch when Prohibition ended. 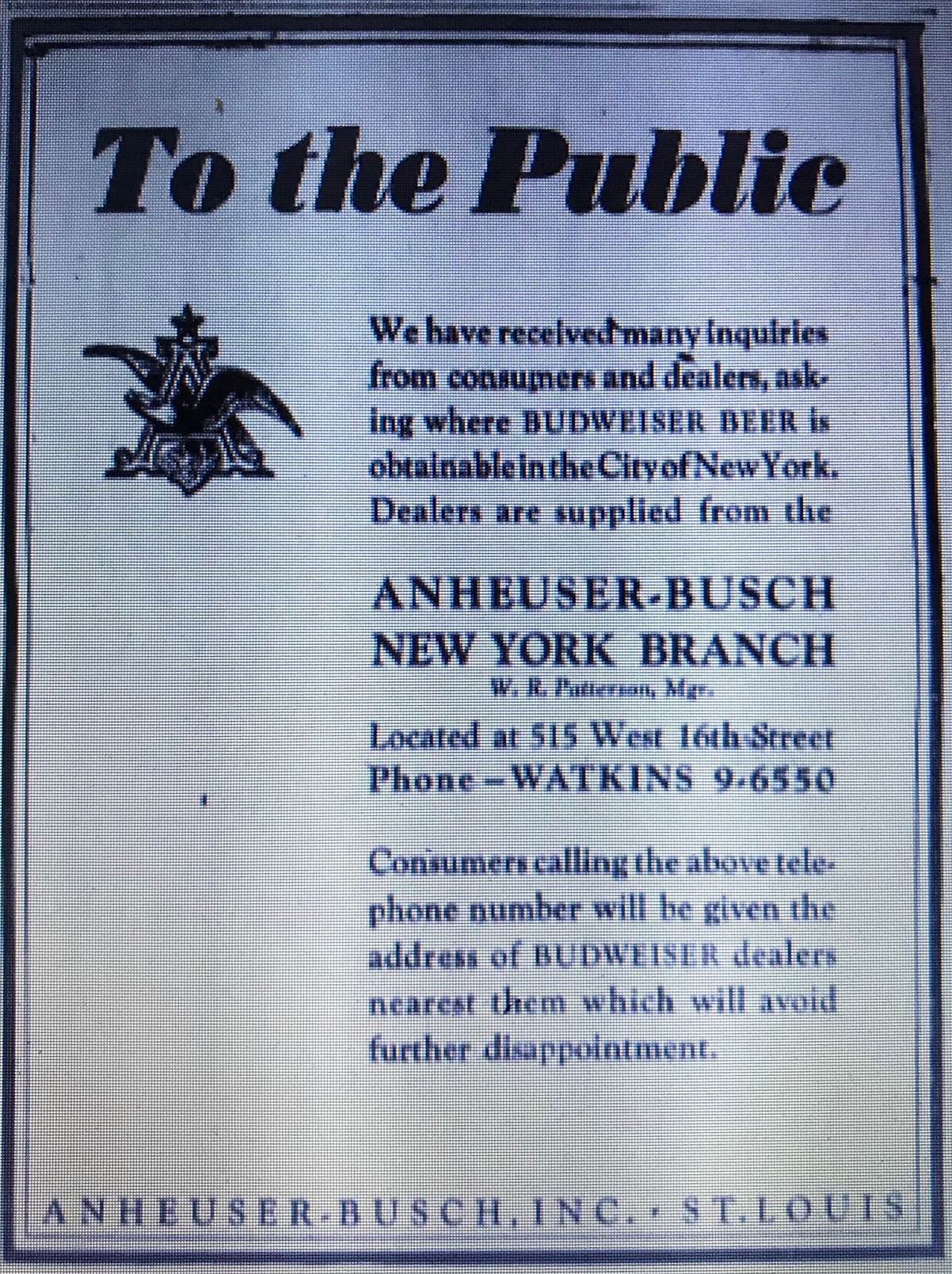 Today, 433 to 443 Atlantic Avenue is a series of renovated apartment buildings. They don’t appear old enough to be associated with this business but the other side of Atlantic Avenue appears older.

I have found two champagne style bottles both with tooled crowns. They are embossed with the A Busch Bottling Co. name and the Anheuser Busch trade mark insignia. I’d say they fit within the first half of the 1897 to 1920 time frame of the business..