The P stands for Peter B. Knapp whose business dated back to 1839. Knapp ran a medicine warehouse at 362 Hudson Street where he sold proprietary medicines, both wholesale and retail. The business is listed in the 1847 NYC Directory at that address and remained there through at least 1932. It was listed at (or more probably expanded to include) 373 Hudson Street and later 388 Hudson Street from 1933 to 1949 after which there’s no record that I can find.

Relatively early on in their history, the business manufactured and marketed patent medicines, including Knapp’s Indian Strengthening Plaster and Knapp’s Extract of Roots. An advertisement in the April 21, 1845 issue of the Brooklyn Daily Eagle touts:

Knapp’s Celebrated Indian Strengthening Plaster. –  These plasters prepared for pains and weakness in the back, breast, side or limbs, rheumatism, weakness and pain in the chest or loins, across the kidneys, or between the shoulders, liver complaints, diseases of the lungs, lumbago, bruises, sprains and other local injuries of a like nature. Knapp’s Indian Strengthening Plaster will prove, it is confidently believed, the most efficacious outward application that medical science has ever placed within the reach of suffering humanity.

A July 1876 advertisement for Knapp’s Extract of Roots stated:

One of the healthiest and pleasantest beverages known is made from this extract, the reputation of which has been well established for over 30 years… 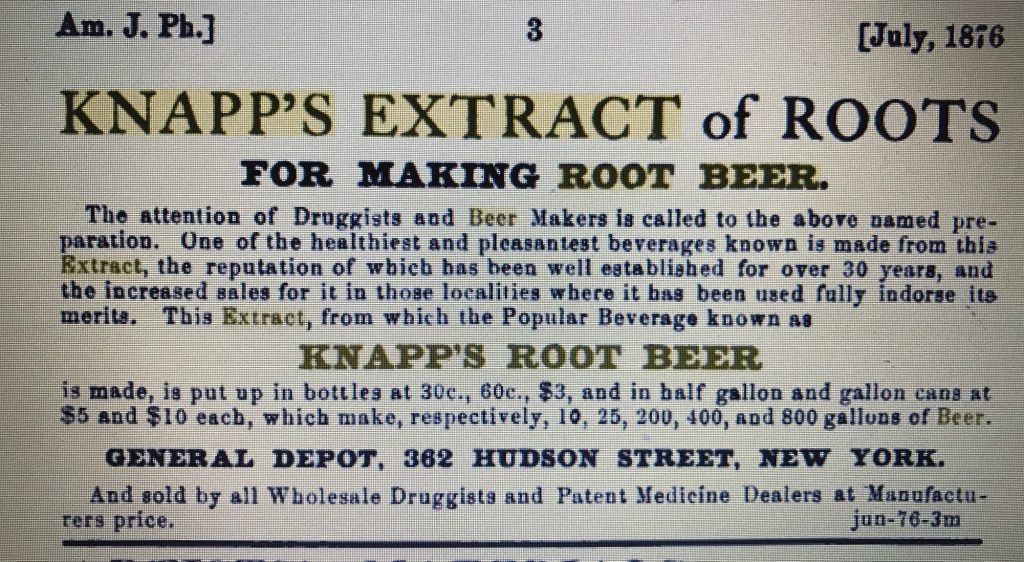 In 1877 the business was also listed as a New York agent for Dr Underhill’s Pure Wines.

Peter Knapp was involved in the business through 1893, when as the Senior Partner an issue of Chemist & Druggist mentioned that he was one of the oldest druggists in New York.

Sometime in the late 1890’s, Peter passed away but the business apparently remained in the family. Gilbert Knapp was listed as the firm’s active partner in 1903. Around this time they published a 16-page booklet entitled “A Pig and a Poke and Other Stories”in commemoration of the fact that their prescription series had reached the half million mark. An excerpt follows:

One hundred dollars would not do so much now, but in the year 1839 Peter B Knapp established a drug store with it. He had served a long apprenticeship at Van Kleeck’s on lower Sixth Avenue, and wanted to own a store of his own. He bought his stock and it was delivered to him, all in one load.

People believed in home-brewed herb remedies in those days and knew how to prepare them. The little herbarium thrived. Cherished household recepies were brought there to be compounded. The forefathers of the present generation had there infantile colics soothed with catnip that could nowhere else be found of such full fresh flavor as at Knapp’s. It wasn’t so big a place then as it is now, and it wasn’t on the corner. As the business grew, the store deepened and the corner was finally taken in. The firm of P. B. Knapp & Sons now occupies the greater part of two buildings and an annex besides.

The lines of development of late years in Messrs Knapp & Sons’ business have been in the development of a prescription department which is unique and in some respects unequalled in the City. This department, in which confidence is everything now constitutes the main part of their business.”

In 1920, the Knapp family is apparently no longer involved with the business. The Directory for that year names August Hardinger as the only principal.

The bottle I found is a small square mouth blown pharmacy bottle with a tooled finish. It has the 362 Hudson Street address on it and most likely dates back to their prescription department of the early 1900’s.